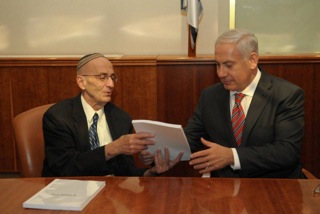 The Israel Office of the Zionist Organization of America (ZOA) is disseminating an anti-discrimination and boycotts bill, introduced by Congressman Steve Stockman (R-TX) earlier this year, among Knesset members, policy and party leaders, and international law experts.

Stockman’s bill, Prohibiting Discrimination Against Israel Act (HR 4581), calls for the U.S. government to terminate funding “for any international project that prohibits participation of Israeli organizations that operate beyond the 1949 armistice line” — namely, in Judea and Samaria.

Israeli officials thus far approached by Daube have expressed surprise that an American lawmaker would choose to stand up for targeted Israeli Jewish citizens to this extent.

This is in addition to other congressional efforts ZOA’s Israel Office is tracking. At different stages of preparation, and varying in form and content, they all look to stem the growing BDS (Boycott, Divestment and Sanctions) movement against Israel.

Guardedly optimistic ZOA Israel Director, Jeff Daube, expects that Knesset leaders, once made aware of supportive U.S. legislation, will be encouraged to be more outspoken themselves, and maybe even enact similar legislation of their own.

Stockman’s bill in hand, with salient portions translated into Hebrew, Daube is asking: “How is it that American legislators are backing Israel, in robust and hopefully practicable ways, while the leaders of Israel confoundingly are not doing the same on Israel’s own behalf?”

Stockman’s principled bill is making an impression. Israeli officials thus far approached by Daube have expressed surprise that an American lawmaker would choose to stand up for targeted Israeli Jewish citizens to this extent. Many also are intrigued — some already buoyed for action — by the respect for Israel’s land and building claims HR 4581 implies.

Matters of discrimination and Israel’s rights are the bailiwick of the Legal Grounds Coalition, co-chaired by ZOA’s Daube and journalist/activist Arlene Kushner. As part of its Knesset campaign, Legal Grounds is asking members to do at least as much as Congressman Stockman, for example by publicly articulating support for the July 2012 Report on the Legal Status of Building in Judea and Samaria.

In what became known as The Levy Report (after Israeli Supreme Court Justice Edmond Levy OBM, head of the distinguished panel of jurists who assembled the arguments), 89 pages adduced and applied the factors proving Israel’s presence in Judea and Samaria is legal.

These factors include the critical League of Nations ‘Mandate for Palestine’ (1922); the fact that these lands were obtained in a defensive war while they were stateless, having been illegally annexed previously by Jordan; and the inapplicability of misinterpreted Article 49(6) of the 4th Geneva Convention, which forbids the coerced transfer of populations.

The Levy Report’s bottom line: The underlying premise of belligerent occupation is a legal fiction. Israel’s situation is unique (“sui generis”). Denying Israelis the right to live and build in Judea and Samaria has no legal basis.

Due to heavy pressure, The Levy Report was shelved by PM Netanyahu soon after completion — even though he was the one who had commissioned it, and (says a reliable source) he affirmed at the submission ceremony, “Ah, this is just what we need!”

ZOA’s Legal Grounds is slowly nurturing the momentum back toward acceptance. According to Levy Report co-author Ambassador Alan Baker, a recent government declaration that 988 acres of Gush Etzion in Judea is State land — the culmination of a survey begun many years earlier and then inexplicably frozen — actually is partial implementation of Levy Report recommendations.

Professor Eugene Kontorovich is another member of the Legal Grounds advisory committee, besides Baker, weighing in on the Stockman bill and related international laws. At a major anti-BDS Knesset summer conference organized by ZOA’s Legal Grounds with MK co-sponsors Robert Ilatov (Yisrael Beteinu) and Ayelet Shaket (Bayit Yehudi), From De-legitimization to Re-legitimization, he and other experts referenced principles and conclusions delineated by the Levy Commission.

Kontorovich in addition contributed perhaps the most compelling argument, uti possidetus juris, justifying Israel’s land claims west of Jordan. This legal construct speaks to the precedence of pre-sovereignty borders (e.g., those established by the ‘Mandate for Palestine’) when borders for a newly sovereign state need to be determined.

Reprehensibly, the State Department has been moving U.S. policy in the opposite direction. Prejudging how the disposition of these disputed lands ultimately will resolve, USAID’s Trans-Green Line Boycott (TGLB) unjustly discriminates against Judea and Samaria’s Jewish residents. ZOA’s Israel Office has been fighting this with the help of members of Congress, and prominent others, for some time.

Daube finds State Department policy not only troubling but also puzzling: “Proposals to fund water sewage treatment and research projects at Ariel University, which would benefit Arab and Jewish residents alike, and the environment too, are turned down or ignored. It is high time the U.S. executive branch recognized that coexistence, people-to-people initiatives — take the SodaStream factory as one successful example — are the only way to build toward peace in the region.”

Daube has asked Stockman staffers to investigate whether HR 4581 might be applied to State Department policy, making a government body therefore subject to funding termination if its contracts and grants are found in violation. Daube also is in touch with a number of congressional offices about entering the relevant Levy Report in the Congressional Record, and introducing another iteration of HR 4581 in the 114th Congress. Stockman’s iteration is not likely to make it out of committee during the current session, this being near the end of his tenure in office.

Regardless of the outcome of the Stockman bill in whatever form, or its applicability to State Department discriminatory misconduct, Daube feels this or something similar needs to be “vigorously supported in conjunction with the Legal Grounds campaign while anti-Israel movements like J Street are ramping up their BDS activity.” J Street is circulating a petition urging the Obama Administration to refer to Jewish communities in eastern Jerusalem and Judea-Samaria as “illegal” instead of the — also factually incorrect — “illegitimate” presently in vogue.

Daube continued, “Israel increasingly finds itself the target of boycotts originating in the U.S., including from the U.S. government itself. But it should be obvious to any fair-minded individual or government that discriminating against a group because of religious or national affiliation is flatly wrong.

“Hoping to thus maneuver Israel into complying with directives to curry favor with Israel’s adversaries also is a slap in the face of Israel sovereignty. I’m hoping the ferment to oppose this trend will grow further by means of Stockman-like bills in both countries; and more serious consideration of the Levy Report, a potential game changer if used appropriately.”

We would love to hear from you! Please fill out this form and we will get in touch with you shortly.
Trending Z
News September 22, 2014
ZOA Condemns U.S. State Dept. & U.S. Amb. Nides For Siding with Antisemitic, Discriminatory Palestinian & Hamas Terrorists re: the Temple Mount, Violating Jews’ Religious Freedom
News September 22, 2014
ZOA’s Klein JPost Op-Ed: There is Nothing Extreme About Israel’s New Government
Uncategorized September 22, 2014
FLASH: ISRAEL-JORDAN PEACE TREATY (1994) GUARANTEES JEWS ACCESS TO THE TEMPLE MOUNT – LET MY PEOPLE PRAY
Uncategorized September 22, 2014
ZOA Analysis: Most American Rabbis Who Are Boycotting Some Israeli Ministers Are From Extremist Left Wing Groups (J Street; T’ruah; JVP)
Center for Law & Justice
We work to educate the American public and Congress about legal issues in order to advance the interests of Israel and the Jewish people.
We assist American victims of terrorism in vindicating their rights under the law, and seek to hold terrorists and sponsors of terrorism accountable for their actions.
We fight anti-Semitism and anti-Israel bias in the media and on college campuses.
We strive to enforce existing law and also to create new law in order to safeguard the rights of the Jewish people in the United States and Israel.
Our Mission
ZOA STATEMENT
The ZOA speaks out for Israel – in reports, newsletters, and other publications. In speeches in synagogues, churches, and community events, in high schools and colleges from coast to coast. In e-mail action alerts. In op-eds and letters to the editor. In radio and television appearances by ZOA leaders. Always on the front lines of pro-Israel activism, ZOA has made its mark.
Related Articles
OP-ED CIA Nominee Brennan Dismisses Radical Islam, Calls J’lem Al-Quds, Whitewashes Hizballah