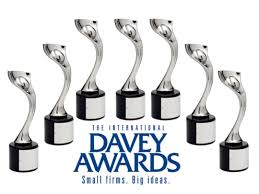 The Zionist Organization of America (ZOA) has been named a Silver Award winner in the “political” category in the International Davey Awards competition.  The Davey Awards is an international creative award honoring exclusively outstanding creative work from the best small firms worldwide. Winners of the 2014 international digital design competition were announced by the Academy of Interactive and Visual Arts, the competition’s sponsors, last week.

The Davey Awards are judged and overseen by the Academy of Interactive and Visual Arts (AIVA), a 600+ member organization of leading professionals from various disciplines of the visual arts dedicated to embracing progress and the evolving nature of traditional and interactive media. Current IAVA membership represents a “Who’s Who” of acclaimed media, advertising, and marketing firms including: Condé Nast, Disney, GE, Microsoft, Monster.com, MTV, Publicis, Yahoo!, and many others.

This newest of digital awards ZOA has received in recent years is continued testimony to the creativity, design and unparalleled content on www.zoa.com

ZOA National President Morton A. Klein and National Executive Director David Drimer said, “We are very proud of this recognition for our total team effort. The ZOA’s website has won this high recognition from among over 4,000 entries from across the United States and the world. This newest of digital awards ZOA has received in recent years is continued testimony to the creativity, design and unparalleled content on www.zoa.com, which has become a user-friendly and sophisticated portal to the whole array of issues that energize the ZOA’s activities.

“We will continue to use every medium at our disposal to spread the essential message of the Arab world’s continued war on Israel, to educate the public and lobby Congress on Israel’s security interests, and protect students on campus from anti-Semitism. In this context, we are very pleased to note that ZOA’s Facebook page has attracted an exponential growth in ‘likes’ in the past few months,” they added.

Linda Day, Executive Director of the Davey Awards, said, “This year’s Davey Award winners truly embody the idea of small firms with big ideas. The work entered into this year’s competition reflects a smart approach to creativity that highlights the capabilities and talents of small agencies worldwide.”

“On behalf of the Davey Awards and the Academy, we applaud this year’s entrants and winners for their dedication and commitment to perfecting their craft. Congratulations once again for a job well done,” she continued.

We would love to hear from you! Please fill out this form and we will get in touch with you shortly.
Trending Z
News October 28, 2014
ZOA Condemns U.S. State Dept. & U.S. Amb. Nides For Siding with Antisemitic, Discriminatory Palestinian & Hamas Terrorists re: the Temple Mount, Violating Jews’ Religious Freedom
News October 28, 2014
ZOA’s Klein JPost Op-Ed: There is Nothing Extreme About Israel’s New Government
Uncategorized October 28, 2014
FLASH: ISRAEL-JORDAN PEACE TREATY (1994) GUARANTEES JEWS ACCESS TO THE TEMPLE MOUNT – LET MY PEOPLE PRAY
Uncategorized October 28, 2014
ZOA Analysis: Most American Rabbis Who Are Boycotting Some Israeli Ministers Are From Extremist Left Wing Groups (J Street; T’ruah; JVP)
Center for Law & Justice
We work to educate the American public and Congress about legal issues in order to advance the interests of Israel and the Jewish people.
We assist American victims of terrorism in vindicating their rights under the law, and seek to hold terrorists and sponsors of terrorism accountable for their actions.
We fight anti-Semitism and anti-Israel bias in the media and on college campuses.
We strive to enforce existing law and also to create new law in order to safeguard the rights of the Jewish people in the United States and Israel.
Our Mission
ZOA STATEMENT
The ZOA speaks out for Israel – in reports, newsletters, and other publications. In speeches in synagogues, churches, and community events, in high schools and colleges from coast to coast. In e-mail action alerts. In op-eds and letters to the editor. In radio and television appearances by ZOA leaders. Always on the front lines of pro-Israel activism, ZOA has made its mark.
Related Articles
OP-ED ZOA: Natl. Jewish Democratic Council Should Oppose Hagel Nomination As It Did In 2009