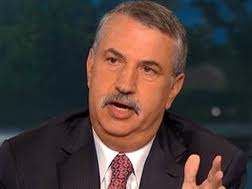 The Zionist Organization of America (ZOA) has noted that veteran left-wing New York Times columnist Thomas L. Friedman has made the remarkable admission that he has “no idea whether Israel has a Palestinian partner for a secure peace.” Friedman is a long-time advocate of creating a Palestinian Arab state, of Israeli concessions to the Palestinian Authority (PA) and a critic of Israel for being insufficiently concessionary in its dealings over two decades with the PA. He has repeatedly chastised Israel for developing Jewish communities in Judea/Samaria and for the lack for Palestinian Arab statehood.

“Thomas L. Friedman is right to admit that there is no basis for thinking the PA seeks peace, but he will not draw the obvious conclusion that the PA and Palestinian Arab society must undergo a transformation before peace can become possible.

In an interview with Israel Army Radio, Friedman said that he has “no idea whether Israel has a Palestinian partner for a secure peace.” However, ignoring Israel’s in-principle acceptance of Palestinian statehood, its unprecedented 10-month freeze on Jewish construction in Judea/Samaria, its in-principle acceptance of Palestinian statehood, its conceding all of Gaza and nearly half of Judea/Samaria to the PA, its freeing of jailed and convicted blood-soaked Palestinian terrorists in order to bring the PA to the negotiating table and other unilateral, unreciprocated Israeli concessions over recent years, Friedman added, “given Israel’s predicament, it should be doing everything it can to test, test, test, and test again, whether it has such a Palestinian partner” (Dave Bender, ‘Tom Friedman Admits: ‘No Idea’ if Palestinians Are Peace Partners,’ Algemeiner Journal, November 4, 2014)

ZOA National President Morton A. Klein said, “Finally –– 21 years since the Oslo Accords –– Thomas L. Friedman admits that he has ‘no idea whether Israel has a Palestinian partner for a secure peace.’

“That being the case, will he now publicly apologize for years of urging, indeed, haranguing Israel to make concessions to the unreconstructed, terror-supporting PA which the Oslo Accords created?

“To judge by his incongruous insistence in the same interview that, despite continuing PA pro-terror, anti-peace words and deeds and a long list of Israeli concessions, Israel needs to ‘test, test, and test again’ the PA on peace, the answer seems to be no.

“While the PA persists in refusing to disarm and outlaw terrorist groups, jail terrorists and end the glorification of terrorism and incitement to hatred and murder that permeates the PA, the issue is settled: there is no prospect of peace. Only when these circumstances have drastically changed will peace come into view.

“Thomas L. Friedman is right to admit that there is no basis for thinking the PA seeks peace, but he will not draw the obvious conclusion that the PA and Palestinian Arab society must undergo a transformation before peace can become possible.

“Years ago, when I met privately with Friedman in his Washington, D.C., office, he insisted that all would be well and peace emerge if Israel ceased building homes in Judea/Samaria and create a Palestinian Arab state. I responded that the Palestinian Arabs had been offered statehood in 1937 and 1947, yet no peace had emerged in the past. Friedman replied that things have changed dramatically and Palestinian Arabs were ready for a real peace. Now, at last, Friedman has conceded that, unfortunately, this is not the case.”

We would love to hear from you! Please fill out this form and we will get in touch with you shortly.
Trending Z
News November 11, 2014
ZOA Condemns U.S. State Dept. & U.S. Amb. Nides For Siding with Antisemitic, Discriminatory Palestinian & Hamas Terrorists re: the Temple Mount, Violating Jews’ Religious Freedom
Uncategorized November 11, 2014
FLASH: ISRAEL-JORDAN PEACE TREATY (1994) GUARANTEES JEWS ACCESS TO THE TEMPLE MOUNT – LET MY PEOPLE PRAY
Uncategorized November 11, 2014
ZOA Analysis: Most American Rabbis Who Are Boycotting Some Israeli Ministers Are From Extremist Left Wing Groups (J Street; T’ruah; JVP)
Uncategorized November 11, 2014
Israel’s “Right of Return” Grandparent Clause is De-Judaizing the Jewish State – Eliminate It
Center for Law & Justice
We work to educate the American public and Congress about legal issues in order to advance the interests of Israel and the Jewish people.
We assist American victims of terrorism in vindicating their rights under the law, and seek to hold terrorists and sponsors of terrorism accountable for their actions.
We fight anti-Semitism and anti-Israel bias in the media and on college campuses.
We strive to enforce existing law and also to create new law in order to safeguard the rights of the Jewish people in the United States and Israel.
Our Mission
ZOA STATEMENT
The ZOA speaks out for Israel – in reports, newsletters, and other publications. In speeches in synagogues, churches, and community events, in high schools and colleges from coast to coast. In e-mail action alerts. In op-eds and letters to the editor. In radio and television appearances by ZOA leaders. Always on the front lines of pro-Israel activism, ZOA has made its mark.
Related Articles
OP-ED BY: Morton A. Klein, ZOA Jerusalem is Holy to Jews, Not to Muslims