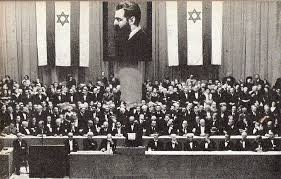 The Zionist Organization of America (ZOA) is continuing its efforts to try to make sure that the 2015 World Zionist Congress does not include organizations that promote BDS, boycotts against Jewish businesses and international sanctions against Israeli officials who they disagree with.

The confusingly-named “Open Hillel” group tries to force the eminent campus organization Hillel International to provide platforms to promote the global BDS movement – while denying platforms to opponents of BDS.

ZOA had previously filed an elections complaint against the “HaTikvah slate” because Partners for a Progressive Israel (PIP) (a major member of that slate) openly promotes boycotts of Israeli Jewish businesses right on PIP’s website, and because Ameinu (another major member of the HaTikvah slate) lobbies U.S. and European governments to impose severe financial and visa sanctions on Jewish Israeli leaders whom Ameinu disagrees with.   Ameinu’s top officials also double as J Street officials or are tied closely to J Street, which engages in extensive de facto promotion of BDS.

ZOA’s supplemental complaint, filed on January 12, 2015, documents the BDS activities of these additional confirmed members of the “HaTikvah slate”:

(3)   New Israel Fund (NIF):  NIF spent a fortune erecting the BDS infrastructure, and continues to fund BDS groups and their co-conspirators.  NIF grantees Adalah, B’Tselem, and Breaking the Silence also provided the false information to Judge Goldstone which formed the basis of the false (and since discredited) Goldstone report that accused Israel of war crimes.  The BDS movement uses the false Goldstone report as one of its chief weapons to promote BDS against Israel.  The “US Campaign for the Academic & Cultural Boycott of Israel” has a web page entitled “Sections of Goldstone Report Very Useful for BDS and related campaigns.”  The NIF also funds groups that hire Arabs to viciously provoke a response from young Israeli soldiers. On the rare occasion when a yound soldier responds, these groups’ cameras film and disseminate the response to try to harm the IDF’s reputation.*

(4)   J-Street:  J Street promotes, honors, and gives major platforms to the leaders of the global BDS movement (including Mustafa Barghouti) at its national conferences and brings top BDS leaders to college campuses.  J Street also promotes BDS on J Street’s website video.  ZOA’s supplemental complaint also documents some of J Street’s other anti-Israel activities, including raising and spending millions of dollars to defeat pro-Israel Congresspersons, involvement with an Iranian regime organization, and J Street’s presidents tie to Fenton Communications – which Qatar contracted with to run a sophisticated anti-Israel campaing.  (Qatar is the largest funder of Hamas).

In addition, yesterday the ZOA submitted a false advertising complaint regarding the HaTikvah slate’s platform page, which was published the same day (January 14, 2015) on the official AZM election website for the World Zionist Congress election.

*Correction: A previous version of this release also referenced BDS activities of Adalah-NY and attributed these additional BDS activities to the NIF-funded Adalah.   A blogger who stated that he is a friend of persons involved then contacted ZOA.  This blogger stated that Adalah-NY is a separate entity from the NIF-funded Adalah.  The lack of information on Adalah-NY’s directors and associations makes the blogger’s claim that Adalah-NY is a separate entity difficult to confirm.  Apparently neither Adalah nor Adalah-NY is complaining that the other group is using the same name.  It thus seems that neither group has concerns about the other group’s actions which can be understandably be attributed to the other.  Nonetheless, in the event the blogger’s information is correct, ZOA has removed Adalah-NY’s BDS activities from this paragraph.  The paragraph now only discusses Adalah’s activities which help the BDS movement.

We would love to hear from you! Please fill out this form and we will get in touch with you shortly.
Trending Z
Uncategorized January 15, 2015
ZOA Analysis: Most American Rabbis Who Are Boycotting Some Israeli Ministers Are From Extremist Left Wing Groups (J Street; T’ruah; JVP)
Uncategorized January 15, 2015
ZOA: Israel’s Reasonable Judicial Reform Proposals Are Good for Democracy, the Rule of Law and the Economy
News January 15, 2015
ZOA is Disappointed, Offended and Frightened by 211 U.S. House Votes Supporting Jew-Hating, Israel-Hating Rep. Ilhan Omar
Uncategorized January 15, 2015
Israel’s “Right of Return” Grandparent Clause is De-Judaizing the Jewish State – Eliminate It
Center for Law & Justice
We work to educate the American public and Congress about legal issues in order to advance the interests of Israel and the Jewish people.
We assist American victims of terrorism in vindicating their rights under the law, and seek to hold terrorists and sponsors of terrorism accountable for their actions.
We fight anti-Semitism and anti-Israel bias in the media and on college campuses.
We strive to enforce existing law and also to create new law in order to safeguard the rights of the Jewish people in the United States and Israel.
Our Mission
ZOA STATEMENT
The ZOA speaks out for Israel – in reports, newsletters, and other publications. In speeches in synagogues, churches, and community events, in high schools and colleges from coast to coast. In e-mail action alerts. In op-eds and letters to the editor. In radio and television appearances by ZOA leaders. Always on the front lines of pro-Israel activism, ZOA has made its mark.
Related Articles
OP-ED Hearings Reveal More Hagel Horrors – U.S. Is “World’s Bully, Israel is War Criminal and Committed “Sickening Slaughter”