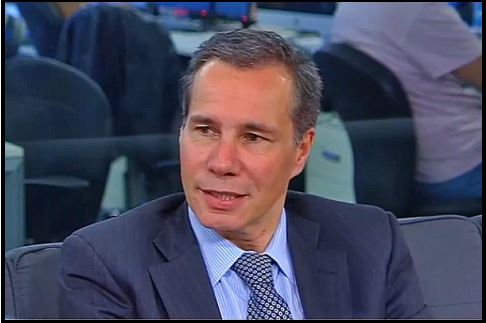 Argentine state prosecutor Alberto Nisman was shot dead just hours before he was going to testify to the Argentinian Congress on Monday, Jan. 19, that his country’s president was directly involved in cover-ups to obscure Iran’s involvement in the Buenos Aires bombing of the Israeli Embassy and Jewish Community Center.

Nisman was the special prosecutor on the case. In 2006 he formally accused the government of Iran of directing the bombing and the Hezbollah terrorist organization of carrying it out.

In May, 2013, Nisman released a report accusing Iran of establishing terrorist networks in Latin America dating back decades.

In May, 2013, Nisman released a report accusing Iran of establishing terrorist networks in Latin America dating back decades. That report provided evidence, he claimed, of an “intelligence and terrorist network” in Argentina, Brazil, Paraguay, Uruguay, Chile, Colombia, Guyana, Trinidad, Tobago and Suriname.

Nisman further claimed that the evidence in his report proved “beyond a reasonable doubt” that former Iranian cultural attaché in Argentina, Mohsen Rabbani, was responsible for the 1994 AMIA bombing, and that he was the “coordinator of the Iranian infiltration of South America.”

Argentine President Cristina Fernandez has close ties with other Latin American leaders who are friends of Iran, but Nisman’s claim last week that she was directly involved in the cover-up was a bombshell.

There were many irregularities over the years regarding the court case over the 1994 bombing. All the local suspects were found “not guilty,” and the federal judge in charge of the case was later impeached and removed from his position for “serious” mishandling of the case.

Last week Nisman said during a radio interview that he had proof of the Argentine president’s involvement in the cover-up. The assistance was provided, Nisman, said, because Argentina wanted to “establish full diplomatic relations, and, more importantly, a commercial trade due to the energy crisis that Argentina faced,” the MercoPress, a South American news source, reported.

Nisman also explained that Argentina’s former foreign minister, Rafael Bielsa, had received a proposal from the Iranians in which they offered “a very beneficial economic offer, in exchange we have to state that the prosecutor’s complaint was all a mistake and void it.”

Nisman’s decision to speak out publicly about his evidence against the president appeared to be motivated by the decision of the judge overseeing the case who refused to end the court’s January recess in order to hear the accusations filed by Nisman.

A former judge on the case said the evidence to which Nisman had pointed was “flawed” because Nisman had not involved him in the wiretap decisions. Nisman’s response was that he did not undertake any new wiretapping, “I simply worked with evidence collected along the way,” the MercoPress reported.

Nisman was found dead of gunshot wounds in his home this morning.

This article was originally published by Jewish Press and may be found here.

We would love to hear from you! Please fill out this form and we will get in touch with you shortly.
Trending Z
News January 19, 2015
ZOA Deplores that Pres. Trump Dined with Jew-Haters Kanye West & Nick Fuentes, and Demands he Condemn Them
News January 19, 2015
Newsweek Op-Ed by ZOA’s Mort Klein: ZOA Honoring Trump as the Greatest President Ever for Israel and American Jews
Uncategorized January 19, 2015
ZOA Honors Trump With Rarely Given Herzl Award for His Great Pro-Israel Work – Joins Ranks of Balfour, Truman, Begin, Meir, Ben-Gurion
Uncategorized January 19, 2015
Zionist Organization of America Honors Donald Trump for Support for Israel, Jewish Community
Center for Law & Justice
We work to educate the American public and Congress about legal issues in order to advance the interests of Israel and the Jewish people.
We assist American victims of terrorism in vindicating their rights under the law, and seek to hold terrorists and sponsors of terrorism accountable for their actions.
We fight anti-Semitism and anti-Israel bias in the media and on college campuses.
We strive to enforce existing law and also to create new law in order to safeguard the rights of the Jewish people in the United States and Israel.
Our Mission
ZOA STATEMENT
The ZOA speaks out for Israel – in reports, newsletters, and other publications. In speeches in synagogues, churches, and community events, in high schools and colleges from coast to coast. In e-mail action alerts. In op-eds and letters to the editor. In radio and television appearances by ZOA leaders. Always on the front lines of pro-Israel activism, ZOA has made its mark.
Related Articles
OP-ED ZOA Criticizes Obama For Supplying F-16s to Egypt’s Anti-Semitic Morsi & His Extremist Islamist Regime