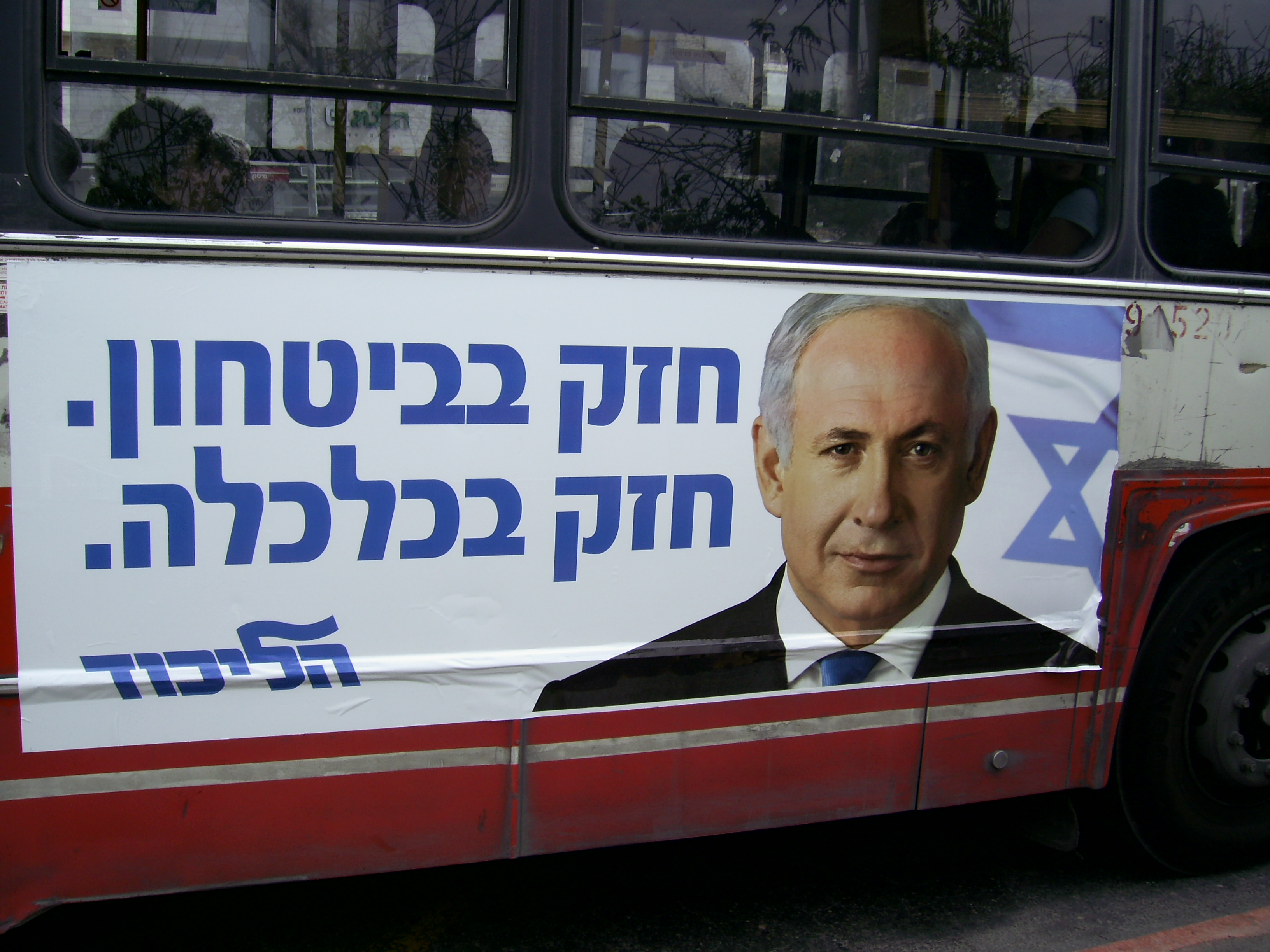 By contrast, VP Biden and Secretary John Kerry met this past Saturday February 7th with Labor party leader Isaac Herzog (the leader of the opposition to PM Netanyhau) on the sidelines of a security conference in Munich, Germany, to reportedly discuss security and defense issues.   The meeting appears to be a blatant attempt to shore up the Israeli left, thereby interfering with Israel’s elections.

U.S. Senator Ted Cruz and Congressman Lee Zeldin have requested an investigation as to the amounts, purposes and uses of the U.S. Government funding to the V15/OneVoice groups that are campaigning against Netanyahu.

Another example of the administration’s selective meetings favoring Israel’s left-wing opposition occurred two weeks after PM Netanyahu announced the Israeli elections and fired left-wing opposition leader Tzipi Livni from her cabinet post.   At a December 18, 2014 meeting with 28 European diplomats, U.S. Secretary of State John Kerry announced that Kerry had consulted with Livni regarding the impacton Israel’s elections of two UN resolutions to impose a Palestinian State.  Livni told Kerry that a UN vote prior to Israel’s elections “would reinforce Benjamin Netanyahu and the hardliners in Israel,” and based on this recommendation, the U.S. decided to delay the vote until after Israel’s election.   A European diplomat likewise stated that Kerry’s message was that UN action prior to the Israeli election would “give more impetus to more right-wing [Israeli] parties.”  In other words, the U.S. administration has openly acknowledged obtaining advice from the Israeli left as to how to topple Netanyahu, and is timing U.S. actions in order to assist Israel’s left in Israel’s upcoming election.

While actively pursuing meetings with and following election recommendations of Israel’s left-wing parties, the White House has engaged in a continuing barrage of misleading condemnations of PM Netanyahu for accepting Speaker John Boehner’s invitation to address Congress.  This appears to have led to the false New York Times report that PM Netanyahu accepted Congress’s invitation before the White House was informed of it.   Although The New York Times later issued a correction explaining that PM Netanyahu accepted Congress’s invitation “after the administration had been informed of the invitation, not before,” the correction received little attention – and the criticism fanned by the Obama administration has persisted.   Following the Obama administration’s lead, House Minority leader Nancy Pelosi asserted that lawmakers might “be too busy to attend” PM Netanyahu’s speech.

In addition, President Obama’s top election organizers – responsible for Obama’s successful “ground game” victories in 2008 and 2012 – have descended on Israel to run a “V15” campaign operation, against PM Netanyahu and for Israel’s left-wing parties, using millions of dollars of foreign funds in apparent violation of Israel’s campaign finance laws.

The V15 campaign operation is being run in conjunction with the U.S. non-profit group “One Voice Movement” also known as the PeaceWorks Network Foundation (PWNF).

In addition to violations of Israeli campaign finance laws, U.S. government funds may be involved in the campaign to topple Netanyahu.   One Voice/PWNF has been the recipient of U.S. Government grants.  U.S. Senator Ted Cruz and Congressman Lee Zeldin have requested an investigation as to the amounts, purposes and uses of the U.S. Government funding to the V15/OneVoice groups that are campaigning against Netanyahu.

The One Voice/PWNF’s Form 990 information returns show that One Voice / PWNF gives grants to extreme anti-Israel groups such as the “American Task Force on Palestine” whose mission includes ending so-called Israeli “occupation,” evacuating all Israeli settlements, withdrawing to indefensible 1967 lines (including leaving all of eastern Jerusalem – including the ancient Jewish parts of Jerusalem), and establishing a so-called “right of return” for millions of supposed Palestinian Arabs to overrun Israel.  (In reality, using the standard definition of “refugees,” there are only 30,000 Palestinian Arab refugees today.  However, children, grandchildren, and others have been counted to grossly inflate Palestinian Arab refugee numbers.)

The “American Task Force on Palestine” is the successor to the “American Committee on Jerusalem,” whose president was Rashid Khalidi, a pro-PLO propagandist who opposes Israel’s very existence.  (Khalidi is a close friend and colleague of President Obama from their Chicago days. Pres. Obama spoke of learning much from Obama’s many dinners with Rashid Khalidi and his wife, anti-Israel activist Mona Khalidi).

In addition, the One Voice/PWNF’s Form 990 information returns show that the organization wired over half a million dollars each year (in 2010, 2011 and 2012) to unnamed groups in the Middle East.

One Voice/PWNF also runs a pro-Arab “This Land is Ours” campaign which shows Arabs planting Palestinian State flags.

One Voice/PWNF also runs an anti-Netanyahu website news service called “Daily Summary: The Israeli Elections and News from Palestine,” including articles from Arab and pro-Arab media including Al-Monitor and +972, and other articles critical of Netanyahu and/or promoting left-wing groups.

In sum, the Obama administration’s criticism and refusals to meet with Netanyahu are the height of hypocrisy.

We would love to hear from you! Please fill out this form and we will get in touch with you shortly.
Trending Z
News February 11, 2015
ZOA Deplores that Pres. Trump Dined with Jew-Haters Kanye West & Nick Fuentes, and Demands he Condemn Them
News February 11, 2015
Newsweek Op-Ed by ZOA’s Mort Klein: ZOA Honoring Trump as the Greatest President Ever for Israel and American Jews
Uncategorized February 11, 2015
ZOA Honors Trump With Rarely Given Herzl Award for His Great Pro-Israel Work – Joins Ranks of Balfour, Truman, Begin, Meir, Ben-Gurion
Uncategorized February 11, 2015
Zionist Organization of America Honors Donald Trump for Support for Israel, Jewish Community
Center for Law & Justice
We work to educate the American public and Congress about legal issues in order to advance the interests of Israel and the Jewish people.
We assist American victims of terrorism in vindicating their rights under the law, and seek to hold terrorists and sponsors of terrorism accountable for their actions.
We fight anti-Semitism and anti-Israel bias in the media and on college campuses.
We strive to enforce existing law and also to create new law in order to safeguard the rights of the Jewish people in the United States and Israel.
Our Mission
ZOA STATEMENT
The ZOA speaks out for Israel – in reports, newsletters, and other publications. In speeches in synagogues, churches, and community events, in high schools and colleges from coast to coast. In e-mail action alerts. In op-eds and letters to the editor. In radio and television appearances by ZOA leaders. Always on the front lines of pro-Israel activism, ZOA has made its mark.
Related Articles
OP-ED CIA Nominee Brennan Dismisses Radical Islam, Calls J’lem Al-Quds, Whitewashes Hizballah