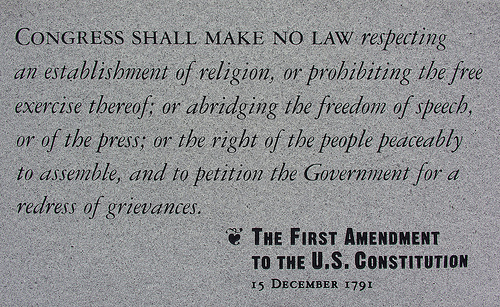 Two hundred Americans attended a “Draw the Prophet” event in Garland, Texas, where cartoons about Muhammad, whom Muslims call their prophet, were drawn.  This event was apparently a response to an earlier “Stand by the Prophet” event, which took place in the same hall and called for restrictions on speech offensive to Islam.

Two heavily-armed Islamic American terrorists drove from their home state of Arizona to Texas, determined to massacre the individuals at the “Draw the Prophet” event.  A massacre was prevented only because a heroic security guard killed the two terrorists before they were able to enter the building where the event was taking place.

Such Islamic terrorists claim that drawing an image of their prophet Muhammad requires the death penalty according to Muslim Sharia law. But Pam Geller and Robert Spencer, the organizers of this private event, and those individuals who chose to attend it, are not bound by Sharia law. Under American law, they had the right to free assembly and the right to free expression, no matter how offensive or provocative that expression might be.  The right to freedom of speech and expression is protected under the First Amendment to the U.S. Constitution and is one of America’s bedrock principles.  Speech does not have to be rational, pleasant or polite to be protected.  Indeed, we have the First Amendment right to criticize offensive speech and to urge schools and other venues not to host offensive speeches.

Whose side were you on when Sony Pictures’ computer network was attacked by North Korean hackers who issued threats if Sony released its movie, The Interview, a comedy that mocked North Korean leader Kim Jong Un and included a fictional plot to assassinate him?

In America, we respect and support the First Amendment and our right to free expression.  U.S. Supreme Court Justice Louis D. Brandeis, a proud Jew, a great Zionist leader and former president of the ZOA, was an eloquent defender of an individual’s right to free speech.  In one of his Supreme Court opinions, Justice Brandeis emphasized that those who fought for our independence “believed that freedom to think as you will and to speak as you think are means indispensable to the discovery and spread of political truth . . . without free speech and assembly, discussion would be futile.”  Affirming our First Amendment freedoms, Justice Brandeis also wrote, “Fear of serious injury cannot alone justify suppression of free speech and assembly.  Men feared witches and burnt women.  It is the function of speech to free men from the bondage of irrational fears.”

Most Americans cherish the free speech protections that Justice Brandeis held dear.  They understand that though we may be offended or provoked to anger by some speech, we as a country abhor the notion of censorship.  And to harm or murder individuals for exercising their freedom of expression is, for Americans, positively unthinkable.

Thus, when radical Muslim Minister Louis Farrakhan makes offensive statements against Jews and Israel – calling Judaism a “gutter religion” and praising Hitler as a “great man” – Jews do not murder or call for Farrakhan’s murder.

When a major Broadway play, “The Book of Mormon,” makes offensive statements mocking the Mormon religion – Mormons do not murder or call for the murder of the play’s writers, producers, actors and patrons.

When artists offend Christianity in despicable ways, by showing a picture of a crucifix in a jar of urine, and depicting the Virgin Mary covered in elephant dung – Christians do not murder or call for the murder of the artists.

When campus groups such as the so-called “Students for Justice in Palestine” make false and offensive statements about Jews and Israel – calling Jews and Israelis “Nazis” and “baby-killers,” and falsely claiming that Israel is an apartheid state and that the Jewish State should be singled out for punishment with boycotts, divestment and sanctions – Jews don’t murder or call for the murder of these anti-Semitic Jew-haters.

When imams at mosques make offensive statements against America and against Jews and Christians – we don’t murder them or call for their murder.

When Muslims in the Palestinian Authority, Jordan, Egypt, Iran and elsewhere print offensive cartoons about Jews, make offensive speeches against Jews, and glorify Jew-killers by naming schools, streets, sports teams, children’s camps and sports tournaments after them – Jews do not murder them or call for their murder.

Because of our First Amendment protections, we can exercise our own free speech rights to condemn these offensive verbal attacks, and urge others to condemn them, too.  We can speak out against the bigotry, debate with the offenders, and correct the hateful lies and factual distortions that are being promoted.  But we don’t react with violence and murder.

Yet after the attempted massacre at the “Draw the Prophet” event, many have focused their criticism not on those who did react with violence, but on the event’s sponsors, blaming them for needlessly provoking the violence. That criticism is misplaced.  The fury and criticism should be directed against the Muslim American terrorists, those who show no respect for our constitutional freedom of expression and will even kill to squelch it.

Radical Muslim terrorists do not even need provocation to kill.  They kill non-Muslims, including Christians, Jews and Hindus, without provocation from cartoons or films, articles, speeches, “tweets” or Facebook postings.

Radical Muslims murdered 3000 innocent Americans on 9-11 at the World Trade Center – with no provocation.

A radical Muslim opened fire at a Jewish school in Toulouse, France, killing a rabbi and his four and five-year-old sons, and then chasing down a seven-year-old girl, grabbing her by the hair and shooting her in the head – with no provocation.

A radical Muslim murdered four Jewish shoppers and held 15 individuals hostage for hours at a kosher market in Paris – with no provocation.

Radical Muslims murdered and injured hundreds of onlookers at the Boston marathon – with no provocation.

A radical Muslim parked a car packed with explosives on a busy street in Times Square, and a radical Muslim attempted to ignite an explosive on a trans-Atlantic flight to Detroit, both attempting to harm and murder Americans – with no provocation.

Life was made so miserable for Christians in Bethlehem and eastern Jerusalem (when under Muslim control from 1948-1967) that 80% of the Christians there left, due to constant harassment, discrimination and false imprisonment by the Muslims – with no provocation by the Christians.  (Together with U.S. Senator Connie Mack and David Bar-llan, then- chief aide to Prime Minister Netanyahu, I have met with Christians living in Bethlehem who described their awful situation. They almost cancelled our meeting due to fear that they might be killed for meeting with us.)

In Saudi Arabia and some other Muslim countries, it is against the law to build a church or own a Bible.  And, in some Muslim countries where there are churches, one cannot restore them when the churches fall into disrepair. Even simply being a Christian or a Jew can be a provocation to murder!

Radical Muslims murder Jews in such countries as the Netherlands, Belgium and Argentina – with no provocation.

Radical Muslims have murdered Christians in such countries as Nigeria, Ethiopia and Iraq – with no provocation.

Radical Muslims have murdered innocent people in Australia and have attacked U.S. embassies and innocent people in malls in Africa – with no provocation. In Africa, Muslim terrorists have actually asked people if they were Muslim, demanding that they recite a Muslim prayer as proof, and murdering them on the spot if they couldn’t do so.

Whose side were you on when Sony Pictures’ computer network was attacked by North Korean hackers who issued threats if Sony released its movie, The Interview, a comedy that mocked North Korean leader Kim Jong Un and included a fictional plot to assassinate him?  Did you support the terrorists who claimed to be offended by the movie, or did you take a stand for freedom of expression?

Whose side were you on when Islamic jihadists stormed the offices of Charlie Hebdo, a French satirical magazine that had published Muhammad cartoons, and opened fire, killing twelve and wounding 11 others?  Did you support the terrorists who claimed to be offended by the cartoons, or did you take a stand – along with four million marchers in Paris, including numerous heads of state – for freedom of expression?

Most Americans refuse to succumb to the terrorists and their threats.  Most of us stand up for our right to speak freely.

ZOA National President Morton A. Klein stated, “The U.S. and the rest of the western world dare not allow radical Muslims to redefine and abrogate a bedrock principle of the United States of America – our freedom of speech.  Even the Muslim president of Egypt, Abdel Fattah el-Sisi, has condemned Islamic extremism.  Calling for ‘a religious revolution’ among Muslims, el-Sisi said, ‘It’s inconceivable that the thinking that we [Muslims] hold most sacred should cause the entire Islamic world to be a source of anxiety, danger, killing and destruction for the rest of the world.’

“Unfortunately, we have not been willing to promote policies, make speeches, or take actions that demonstrate we take seriously the most dangerous enemy in the world: violent jihad.”

As Bret Stephens of the Wall Street Journal wrote about the “Draw the Prophet” event, “Should the polite consensus of American opinion concede the legitimacy of the complaint about cartoons, another complaint will follow.  What will it be?  Daytime eating by non-Muslims in certain neighborhoods during Ramadan?  Criticism of Islam in the form of writing rather than images?  Bullies know that the key to dominion always lies in the first conciliating act of submission.”

We would love to hear from you! Please fill out this form and we will get in touch with you shortly.
Trending Stories
News May 14, 2015
NEW YORK POST: Democratic Leaders’ Shocking Silence Over Attacks on Israel by Fellow Dems
News May 14, 2015
ZOA Criticizes ADL for Featuring Hostile-to-Israel Speakers at ADL Never-Is-Now Conference
Uncategorized May 14, 2015
Mort Klein Mourns Passing of His Cousin Israeli Priest Gregor Pawlowski (Yaakov Griner) – Who Became a Priest After Gentiles Raised/Saved Him
News May 14, 2015
ZOA: Remove Jew-Haters from Congressional Committees: AOC, Tlaib, Omar, McCollum, etc. Endangered Jewish (and Arab) Lives Twice This Week
Our Mission
ZOA STATEMENT
The ZOA speaks out for Israel – in reports, newsletters, and other publications. In speeches in synagogues, churches, and community events, in high schools and colleges from coast to coast. In e-mail action alerts. In op-eds and letters to the editor. In radio and television appearances by ZOA leaders. Always on the front lines of pro-Israel activism, ZOA has made its mark.
Center for Law & Justice
We work to educate the American public and Congress about legal issues in order to advance the interests of Israel and the Jewish people.
We assist American victims of terrorism in vindicating their rights under the law, and seek to hold terrorists and sponsors of terrorism accountable for their actions.
We fight anti-Semitism and anti-Israel bias in the media and on college campuses.
We strive to enforce existing law and also to create new law in order to safeguard the rights of the Jewish people in the United States and Israel.
Related Articles
OP-ED BY: ZOA Staff P.A.’s Abbas Confers Highest Award On Terrorist Leader Al-Wazir, Calling Him “Martyr,” “Model Of a True Fighter”