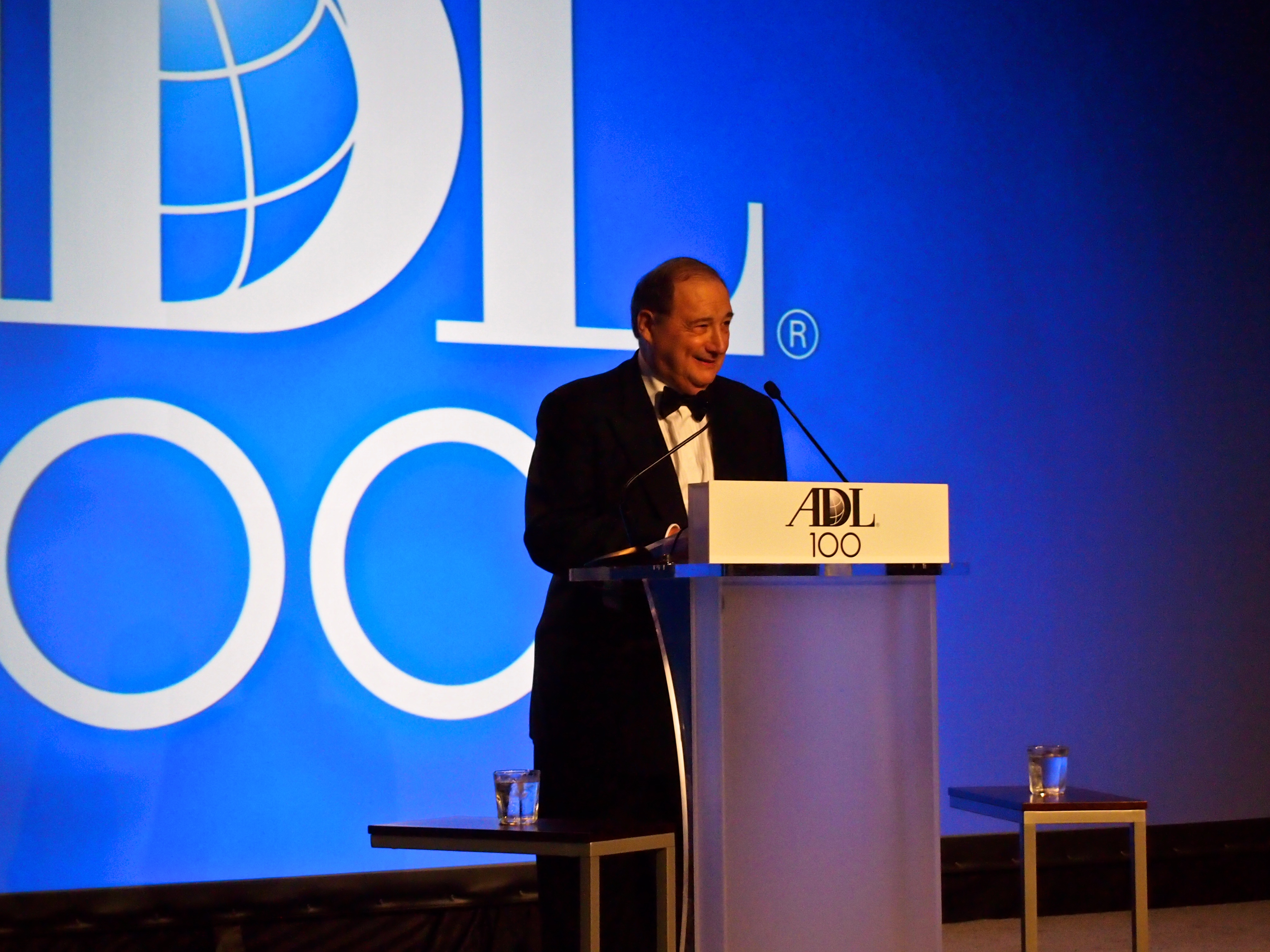 The Zionist Organization of America (ZOA) has criticized the Anti-Defamation League (ADL)’s Director, Abraham Foxman, for his extraordinary attack upon former Israeli Ambassador to the U.S., Michael Oren, for publicizing numerous instances of President Obama’s persistent hostility to Israel during Oren’s four year-term as ambassador (2009-13) in his new book, Ally: My Journey Across the American-Israeli Divide. Ambassador Oren’s book came out this week.

The ADL Director attacked Ambassador Oren for “unjustified and insensitive” statements he has made in his recent publications on the subject of his years as ambassador in Washington, and called on Mr. Oren to retract his statements that “attack” the president and “veer into the realm of conspiracy theories … We hope that Ambassador Oren will walk back these unjustified attacks.” Mr. Foxman also maligned Ambassador Oren’s speculation that President Obama’s policy towards Israel and the Muslim world might be influenced by his personal story of abandonment by his Muslim father and a desire to win acceptance from his co-religionists as “bordlerline stereotyping” (Avi Lewis, ‘ADL demands Michael Oren walk back “unjustified attack” on Obama: Foxman raps ex-envoy for engaging in “conspiracy theories” and “amateur psychoanalysis” in series of op-eds on Israel-US relationship,’ Times of Israel, June 22, 2015).

Similarly, in May 2011, the president altered 40 years of U.S. policy by endorsing the 1967 lines with land swaps—formerly the Palestinian position—as the basis for peace-making.

According to numerous advance reviews of the book, Ambassador Oren, who is now a Knesset Member representing the center-left Kulanu party, provides startling instances of President Obama’s deliberately choosing to weaken the historically strong U.S./Israeli relationship over four years, violating the twin principles of “no daylight” and “no surprises.” As recounted by Oren:

•“From the moment he entered office, Mr. Obama promoted an agenda of championing the Palestinian cause and achieving a nuclear accord with Iran. Such policies would have put him at odds with any Israeli leader.”

•President Obama’s desire to put “daylight” between Washington and Jerusalem, even telling American Jewish leaders that, “When there is no daylight … Israel just sits on the sidelines and that erodes our credibility with the Arabs.” “The explanation ignored Israel’s 2005 withdrawal from Gaza and its two previous offers of Palestinian statehood in Gaza, almost the entire West Bank and half of Jerusalem—both offers rejected by the Palestinians.”

•“Mr. Obama also voided President George W. Bush ’s commitment to include the major settlement blocs and Jewish Jerusalem within Israel’s borders in any peace agreement. Instead, he insisted on a total freeze of Israeli construction in those areas—’not a single brick,’ I later heard he ordered Mr. Netanyahu—while making no substantive demands of the Palestinians. Consequently, Palestinian President Mahmoud Abbas boycotted negotiations, reconciled with Hamas and sought statehood in the U.N.—all in violation of his commitments to the U.S.—but he never paid a price.”

•“By contrast, the White House routinely condemned Mr. Netanyahu for building in areas that even Palestinian negotiators had agreed would remain part of Israel.”

•“The other core principle was ‘no surprises.’ President Obama discarded it in his first meeting with Mr. Netanyahu, in May 2009, by abruptly demanding a settlement freeze and Israeli acceptance of the two-state solution. The following month the president traveled to the Middle East, pointedly skipping Israel and addressing the Muslim world from Cairo … Mr. Obama delivered his Cairo speech, with its unprecedented support for the Palestinians and its recognition of Iran’s right to nuclear power, without consulting Israel.”

•“Similarly, in May 2011, the president altered 40 years of U.S. policy by endorsing the 1967 lines with land swaps—formerly the Palestinian position—as the basis for peace-making. If Mr. Netanyahu appeared to lecture the president the following day, it was because he had been assured by the White House, through me, that no such change would happen.”

•“Israel was also stunned to learn that Mr. Obama offered to sponsor a U.N. Security Council investigation of the settlements and to back Egyptian and Turkish efforts to force Israel to reveal its alleged nuclear capabilities.

•“Mr. Netanyahu eventually agreed to a 10-month moratorium on settlement construction—the first such moratorium since 1967— and backed the creation of a Palestinian state. He was taken aback, however, when he received little credit for these concessions from Mr. Obama, who more than once publicly snubbed him.”

•“Throughout my years in Washington, I participated in intimate and frank discussions with U.S. officials on the Iranian program. But parallel to the talks came administration statements and leaks—for example, each time Israeli warplanes reportedly struck Hezbollah-bound arms convoys in Syria—intended to deter Israel from striking Iran pre-emptively.”

•“For Israelis who repeatedly heard the president pledge that he ‘had their backs’ and ‘was not bluffing’ about the military option, only to watch him tell an Israeli interviewer that ‘a military solution cannot fix’ the Iranian nuclear threat, the astonishment could not have been greater.”

ZOA National President Morton A. Klein said, “Ambassador Oren was at the center of the U.S./Israel relationship at the highest levels over the four years of his tenure as Ambassador to the United States. For this reason, his account carries considerable weight and in any case is amply supported in many respects by the public record.

“Moreover, the liberal Ambassador Oren is a member of the center-left Kulanu Party. He was a supporter of the Oslo Accords, the unilateral Israeli withdrawal from Gaza and indeed an advocate of future unilateral withdrawals. His critique of President Obama is based on bitter experience, not ideology.

“Many themes taken up in Ambassador Oren’s book –– President Obama snubbing the Israeli Prime Minister; ignoring Mahmoud Abbas’ anti-peace, pro-terror words and deeds; discarding Resolution 242 and insisting on the 1949 armistice lines with agreed swaps as the baseline for Palestinian statehood; seeking an agreement with Iran that leaves it with a pathway to nuclear weapons; and much else, has been repeatedly highlighted and dissected by the ZOA.

“In fact, the ZOA predicted already in 2009 that Barack Obama would be the most hostile President where Israel was concerned. The ZOA was the only Jewish organization that was critical in detail of his June 2009 Cairo speech, in which he falsely claimed the Palestinian Arabs were ‘displaced’ by Israel in 1948, rather than by the war Arabs launched upon Israel with a view to aborting its establishment; falsely claimed the Palestinian Arabs have been suffering trying to establish their state for 60 years, when they could have had a state in 1937, 1948, 2000 and in 2008, but turned down each opportunity, and more in the same vein.

“In fact, as Isi Leibler, former World Jewish Congress vice-president and veteran Australian Jewish leader, has observed, ‘aside from the Zionist Organization of America, there has been a total lack of response from the American Jewish leadership’ to Obama’s increasingly threatening and hostile approach to Israel.

“What Ambassador Oren has recounted are not trivial matters; they affect the security of Israel and its citizens that ought to immediately concern any American Jewish organization committed to fighting for a strong American/Israeli relationship and defending Israel.

“It is truly astonishing that the head of a major Jewish defense organization would seek to impugn the motives and record of an Israeli ambassador who brings these serious problems in President Obama’s policy to light. Indeed, it is so bizarre that we feel compelled to ask –– why are you doing this, Abe?

“Does Abe Foxman have solid, substantive information or inside knowledge that what Ambassador Oren has described in detail is untrue? If so, he should provide it, rather than trying to shoot the messenger and shut down debate with absurd and offensive talk about stereotyping.

“Disgracefully, Mr. Foxman seems more concerned to run interference for President Obama on his Middle East policies than to defend Israel’s interests. He deserves the widest criticism on this account from all genuinely pro-Israel organizations.”

We would love to hear from you! Please fill out this form and we will get in touch with you shortly.
Trending Z
News June 25, 2015
ZOA Condemns U.S. State Dept. & U.S. Amb. Nides For Siding with Antisemitic, Discriminatory Palestinian & Hamas Terrorists re: the Temple Mount, Violating Jews’ Religious Freedom
Uncategorized June 25, 2015
FLASH: ISRAEL-JORDAN PEACE TREATY (1994) GUARANTEES JEWS ACCESS TO THE TEMPLE MOUNT – LET MY PEOPLE PRAY
Uncategorized June 25, 2015
ZOA Analysis: Most American Rabbis Who Are Boycotting Some Israeli Ministers Are From Extremist Left Wing Groups (J Street; T’ruah; JVP)
Uncategorized June 25, 2015
Israel’s “Right of Return” Grandparent Clause is De-Judaizing the Jewish State – Eliminate It
Center for Law & Justice
We work to educate the American public and Congress about legal issues in order to advance the interests of Israel and the Jewish people.
We assist American victims of terrorism in vindicating their rights under the law, and seek to hold terrorists and sponsors of terrorism accountable for their actions.
We fight anti-Semitism and anti-Israel bias in the media and on college campuses.
We strive to enforce existing law and also to create new law in order to safeguard the rights of the Jewish people in the United States and Israel.
Our Mission
ZOA STATEMENT
The ZOA speaks out for Israel – in reports, newsletters, and other publications. In speeches in synagogues, churches, and community events, in high schools and colleges from coast to coast. In e-mail action alerts. In op-eds and letters to the editor. In radio and television appearances by ZOA leaders. Always on the front lines of pro-Israel activism, ZOA has made its mark.
Related Articles
OP-ED BY: Morton A. Klein ZOA: Iran Pres. Rouhani’s Boasting of Deceiving West on Iran’s Nuclear Weapons Program Underscores the Fraudulence of his Moderate Image