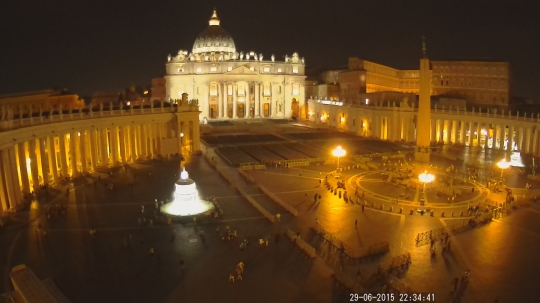 The Zionist Organization of America (ZOA) has opposed the decision of the Vatican to recognize ‘Palestine’ –– a non-existent state, declared by Mahmoud Abbas’ Palestinian Authority (PA) and admitted as a non-member state to the UN in violation of the Oslo Accords, which proscribes unilateral moves and requires Israeli/Palestinian negotiated agreements to serve as the basis of a final peace settlement.

The ZOA believes that this decision is nothing less than recognition of a racist, unreconstructed terror Hamas/Fatah terrorist state. As we stated in May when this decision was pending, recognition of ‘Palestine’ by the Vatican will fortify the Palestinian Arab leaders’ intransigent refusal to negotiate with Israel to end hostilities, to end incitement to hatred and murder in the PA-controlled media, mosques, schools and youth camps, refusal to recognize Israel as the Jewish State, and to remove Hamas and other internationally designated terrorist organizations from their unity government.

ZOA National President Morton A. Klein said, “This is an affirmation, a vote for and an encouragement to, further Palestinian terrorism, rejectionism and denial of Israel’s right to exist as a Jewish state.

“These pro-terror, anti-peace positions, we now see, were no impediment to the Vatican granting an imprimatur to a state of ‘Palestine’ founded on these principles and practices.

“This is an affirmation, a vote for and an encouragement to further Palestinian terrorism, rejectionism and denial of Israel’s right to exist as a Jewish state.”

“Nor for that matter, was it an impediment that ‘Palestine’ lacks the necessary attributes of statehood under international law which, among other things, require a functioning government exercising supreme control in at least part of its claimed territory. The PA does not exercise control in defined territory, as Israel shares in a range of responsibilities by agreement in at least some PA-controlled areas. Further, PA rule has not extended for years to Hamas-run Gaza, and still does not at the time of this writing.

“Moreover, the PA is a signatory to the Oslo Agreements in which it committed itself to not altering the political status of the PA territories, except by a negotiated settlement with Israel.

“The Palestinian Arab State that the Vatican is recognizing will be committed to the Jewish State’s destruction and the murder of Jews, as both the Hamas and Fatah charters proclaim.  Abbas and other senior PA figures have repeatedly declared that no Jew will be allowed to live in a future Palestinian state.

“We also ask why the Vatican cares so little for Palestinian Christians that it has concluded this agreement with the PA which, while less vicious towards Christians than Hamas – that has already nearly depopulated Gaza of Christians, the PA has overseen the persecution and withering of historic Christian communities under its control, like Bethlehem.

“Does the Vatican really wish to empower as a state a regime whose official television broadcasts a children’s program in which a young Palestinian girl was asked to recite a poem which includes insults to Christians and Jews (‘They are remnants of the [Christian] crusaders and [Jews]… inferior and smaller, more cowardly and despised.. enemies of destiny‘)?

“This recogintion also flies in the face of the February 15, 2000 Vatican/PLO agreement which requires the PLO to protect ‘the equality of human and civil rights of all citizens, including specifically, inter alia, their freedom from discrimination, individually or collectively, on the ground of religious affiliation, belief or practice.’

“In an era when the greatest danger to the world is the scourge of radical Islamic terrorism, why is the Pope promoting the establishment of a Hamas-aligned radical Islamic State? Sovereignty will only provide them with more power and resources to promote their ugly and dangerous anti-Christian and anti-Jewish agenda.”

We would love to hear from you! Please fill out this form and we will get in touch with you shortly.
Trending Z
Uncategorized June 29, 2015
FLASH: ISRAEL-JORDAN PEACE TREATY (1994) GUARANTEES JEWS ACCESS TO THE TEMPLE MOUNT – LET MY PEOPLE PRAY
Uncategorized June 29, 2015
ZOA Analysis: Most American Rabbis Who Are Boycotting Some Israeli Ministers Are From Extremist Left Wing Groups (J Street; T’ruah; JVP)
Uncategorized June 29, 2015
Israel’s “Right of Return” Grandparent Clause is De-Judaizing the Jewish State – Eliminate It
Uncategorized June 29, 2015
Exclusive: ZOA Accuses Ilhan Omar of Hating the U.S. ‘as Much as Israel,’ Lauds Kevin McCarthy for ‘Throwing Her Off the HFAC’
Center for Law & Justice
We work to educate the American public and Congress about legal issues in order to advance the interests of Israel and the Jewish people.
We assist American victims of terrorism in vindicating their rights under the law, and seek to hold terrorists and sponsors of terrorism accountable for their actions.
We fight anti-Semitism and anti-Israel bias in the media and on college campuses.
We strive to enforce existing law and also to create new law in order to safeguard the rights of the Jewish people in the United States and Israel.
Our Mission
ZOA STATEMENT
The ZOA speaks out for Israel – in reports, newsletters, and other publications. In speeches in synagogues, churches, and community events, in high schools and colleges from coast to coast. In e-mail action alerts. In op-eds and letters to the editor. In radio and television appearances by ZOA leaders. Always on the front lines of pro-Israel activism, ZOA has made its mark.
Related Articles
OP-ED BY: ZOA Staff J Street Poll Shows 72% of American Jews Support Building in Judea/Samaria