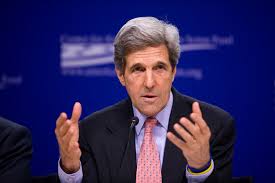 The Zionist Organization of America has strongly criticized official statements yesterday from Secretary of State John Kerry and State Department spokesmen Mark Toner and John Kirby which drew moral equivalence between Israel and Mahmoud Abbas’ Palestinian Authority (PA). While condemning attacks on innocent civilians, the Obama Administration official did so by condemning violence on “either” side, pretending it was a cycle of violence, and urging both sides to stop violence and incitement, when, in fact, Arabs have been deliberately murdering Jews. In contrast, Israeli forces have been acting solely to prevent and apprehend terrorists. By aligning the condemnations in this way, the aforementioned U.S. officials refused to identify and condemn PA incitement to violence, spreading the false impression that both sides are engaging in these activities, as if what was occurring were tit-for-tat acts of terrorism.

Calling on both sides to stop violence and incitement can only imply that both the PA and Israel have been guilty of these things, which is a lie.

“The United States condemns, in the strongest terms possible, the terrorist attacks against Israeli civilians … this violence and any incitement to violence has got to stop … it is not going to lead to the outcome that people want, which is to have a peaceful resolution of the differences. We continue to stress the importance of all persons of responsibility to condemn the violence on either side and to avoid provocative statements that can inflame the tensions even further … I continue to urge all sides to take affirmative steps to restore calm … Unfortunately, this is a revolving cycle … So what we need is to have leadership that condemns the tit-for-tat, that is determined to reach out across difficult lines, bring people to the table in order to work out a procedure where the grievances that are now so many years in the building can ultimately be addressed (‘Remarks With Secretary of Defense Ash Carter, Australian Foreign Minister Julie Bishop, and Australian Defense Minister Marise Payne,’ October 13, 2015).

Also speaking yesterday at Harvard University, Secretary Kerry, instead of condemning Abbas’ PA for fomenting violence and Arabs for carrying our terror attacks on Israelis, rationalized the violence as the result of a “massive increase in [Jewish] settlements” in Judea/Samaria (‘Conversation With Harvard’s John F. Kennedy School of Government Director of the Belfer Center for Science and International Affairs Professor Graham Allison,’ October 13, 2005) (which, incidentally, has not in fact occurred) thus effectively rationalizing Palestinian terrorism, when in fact, all terrorism is held by international law to be illegitimate, irrespective of the cause in which name it is carried out.

(UN Security Resolution 1377 of November 2001 affirms “its unequivocal condemnation of all acts, methods and practices of terrorism as criminal and unjustifiable, regardless of their motivation, in all their forms and manifestations, wherever and by whomever committed”).

State Department spokesman Mark Toner also falsely implied that both Israel and the PA are fomenting violence when he spoke in the departmental daily press briefing of the “recent wave of violence,” not Palestinian terrorism –– a subject on which he was quizzed by one of the journalists present. Mr. Toner replied that he was also referring, not just to recent incidents, but also “attacks on Palestinians … now three or four weeks ago” the perpetrators of which are still unidentified (“investigations remain ongoing”). Mr. Toner also refused to “assign blame” for the recent attacks. Asked what else the Obama Administration expects Israel to do, Mr. Toner offered “upholding the status quo in Haram al-Sharif and Temple Mount” –– that is, the current practice of preventing Jewish prayers on, but not visits to, Temple Mount, Judaism’s holiest site –– which in fact has not been altered and which Israel has repeatedly said in recent days it is upholding (‘Daily Press Briefing,’ October 13, 2015).

ZOA National President Morton A. Klein said, “We strongly criticize Secretary Kerry and Mr. Toner’s statements, which indulge in false equivalence between, on one hand, Abbas’ PA and the Arab terrorists inciting and applauding the murdering and maiming Israeli Jews by Arabs, and Israel on the other, which has taken entirely lawful action to protect Israeli citizens and apprehend terrorists.

“When Secretary Kerry condemns the terrorism against Israeli citizens on one hand, but then immediately speaks of condemning the violence ‘on either side,’ alludes to a ‘revolving cycle’ of violence that has gone ‘back and forth,’ and urges ‘all sides’ to take affirmative steps to restore calm, he nullifies and voids the meaning and worth of his original condemnation. He also defames Israel, which is made to appear guilty of the terrorism and murder he is condemning.

“Calling on both sides to stop violence and incitement can only imply that both the PA and Israel have been guilty of these things, which is a lie.

“One cannot condemn terrorist acts and then include, under the rubric of restoring calm, the lawful actions of self-defense taken in response to them.

“That’s like condemning Nazi Germany for invading Poland, and then calling on both Germany and Poland to take steps to restore calm.

We would love to hear from you! Please fill out this form and we will get in touch with you shortly.
Trending Z
Uncategorized October 14, 2015
ZOA Analysis: Most American Rabbis Who Are Boycotting Some Israeli Ministers Are From Extremist Left Wing Groups (J Street; T’ruah; JVP)
Uncategorized October 14, 2015
ZOA: Israel’s Reasonable Judicial Reform Proposals Are Good for Democracy, the Rule of Law and the Economy
Uncategorized October 14, 2015
Israel’s “Right of Return” Grandparent Clause is De-Judaizing the Jewish State – Eliminate It
News October 14, 2015
ZOA is Disappointed, Offended and Frightened by 211 U.S. House Votes Supporting Jew-Hating, Israel-Hating Rep. Ilhan Omar
Center for Law & Justice
We work to educate the American public and Congress about legal issues in order to advance the interests of Israel and the Jewish people.
We assist American victims of terrorism in vindicating their rights under the law, and seek to hold terrorists and sponsors of terrorism accountable for their actions.
We fight anti-Semitism and anti-Israel bias in the media and on college campuses.
We strive to enforce existing law and also to create new law in order to safeguard the rights of the Jewish people in the United States and Israel.
Our Mission
ZOA STATEMENT
The ZOA speaks out for Israel – in reports, newsletters, and other publications. In speeches in synagogues, churches, and community events, in high schools and colleges from coast to coast. In e-mail action alerts. In op-eds and letters to the editor. In radio and television appearances by ZOA leaders. Always on the front lines of pro-Israel activism, ZOA has made its mark.
Related Articles
OP-ED ZOA: Natl. Jewish Democratic Council Should Oppose Hagel Nomination As It Did In 2009