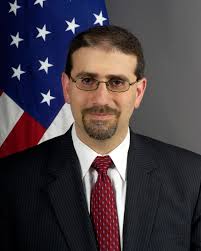 We find Ambassador Shapiro’s statements at the Institute for National Security Studies to be false, hostile, and one sided against the United States most reliable ally, Israel which is surrounded by hostile Arab enemies, many devoted to its destruction. We also find Amb. Shapiro’s deafening silence in light of Abbas’ PA daily promotion and inciting, honoring, and glorifying the murder of innocent Jews, a moral disgrace. Shapiro’s statements are unacceptable and unworthy of an American Diplomat.

The Zionist Organization of America (ZOA) deeply regrets and retracts its qualified endorsement in 2011 of Daniel Shapiro to serve as U.S. Ambassador to Israel.  ZOA criticizes Ambassador Shapiro’s January 18th statement, wrongly blaming Israel and Israeli communities in Judea/Samaria/eastern Jerusalem for lack of peace.  Shapiro asserted at a conference in Tel Aviv yesterday that the US administration was “concerned and perplexed” by Israel’s settlement policy, and said that this policy raised “honest questions about Israel’s long-term intentions.”  Shapiro also falsely asserted that Israel was continuing to expand settlements, making an eventual settlement more difficult.  Shapiro should have blamed Dictator Mahmoud Abbas’ Palestinian Authority (PA) for its rejection of negotiations for 7 years and rejection of Israeli peace offers encompassing Palestinian statehood in 2000, 2001, and 2008 by PM Ehud Barack and PM Ehud Olmert, as well as an offer by Egypt in 2015 to establish part of Sinai as a Palestinian Arab state. Moreover, PM Netanyahu has built fewer homes in Judea/Samaria than any Prime Minister since Oslo began, which includes Rabin, Peres, Olmert, Barak and Sharon. Shapiro also falsely maligned Israel by accusing it of not enforcing the law equally toward Arabs and Israelis.

As ZOA has repeatedly pointed out, “settlements” are not an obstacle to peace.  The Arab war against Israel existed long before any settlements were built.  The settlements comprise only 2% of Judea/Samaria, and the little new building being done are within the boundaries of the existing Jewish communities in historic Jewish land that will remain part of Israel under any conceivable final peace agreement.

In fact, the Palestinian Authority (PA) leadership is solely to blame for the lack of peace. Palestinian Arabs have persistently refused to accept any final peace agreement (including over-generous agreements offered to them in 1937, 1947, 2000, 2001, 2008, and 2015) that call for the Arabs to relinquish their claims to destroy all of Israel.   Instead of negotiating, the PA continues to incite deadly attacks on innocent Jews.  The PA refuses to even negotiate with Israel, even though Israel implores the PA to do so, and made numerous “good will gestures” to try to persuade the Palestinian Arabs to negotiate a peaceful settlement.  During the past seven years, the PA leaders have only met with Israeli leaders on two occasions. Israel has also given away all of Gaza and 42% of Judea/Samaria where 99% of the Arabs live.

ZOA also criticizes Ambassador Shapiro’s additional statements yesterday, falsely accusing Israelis of unchecked vigilantism, a double standard, and failing to vigorously investigate and respond to attacks on Arabs.   He said, “ Too much Israeli vigilantism in the West Bank goes on unchecked…there is lack of thorough investigations…at times it seems Israel has two standards of adherence to rule of law in West Bank – one for Jews and one for Palestinians.” Shapiro’s erroneous remarks were particularly  outrageous in light of Palestinian Arab terrorists’ brutal, deadly attacks on two innocent Israeli Jewish mothers during the 1-day period immediately prior to Ambassador Shapiro’s comments.  These false allegations led to a rare Prime Ministerial rebuke from Benjamin Netanyahu who said, “The Ambassador’s statements on a day when a pregnant Jewish woman is stabbed are unacceptable and wrong. Israel enforces the law on Israelis and Palestinians. The onus for the stalemate in their diplomatic process is on the PA, which continues to incite and refuses to negotiate.”

A Jew suspected in the murder of the Dawabshe family in Duma last July has been arrested and universally condemned by Israeli officials and the Israeli public. If found guilty, he will be subject to the full force of the law. What is Ambassador Shapiro talking about? What is this disgraceful nonsense about Israel not enforcing the law equally? This is nothing less than defamation of the Jewish State. Where is Shapiro’s condemnation of Abbas refusing to negotiate, inciting murder of Jews with lies, saying no Jew will be allowed in Palestine, praising Jew killers, giving their families pensions, refusing to have elections for 5 years, commissioning official posters showing all of Israel as Palestine, etc? Only silence from Shapiro on the PA’s true and continuing horrors.

On January 17, a Palestinian Arab terrorist stabbed to death Dafna Meir, a nurse and innocent Jewish mother of six young children, in front of Mrs. Meir’s home in Otniel (near Hebron, Israel) in front of her daughter Renana, while Mrs. Meir attempted to protect her children.  The Arab terrorist then fled the scene.  The next day, Palestinian Arab terrorist Othman Muhammad Sha’alan stabbed and seriously wounded a pregnant Jewish woman, Michal Froman, who lives in Tekoa, southeast of Jerusalem.   Mrs. Froman is the daughter-in-law of the late rabbi of the community, who was known as a peace activist.

Jewish attacks on Arabs are virtually non-existent.  Attacks on Arabs are swiftly and harshly dealt with by Israeli authorities (and it frequently turns out that other Arabs were responsible for the attack or that the whole incident was invented).

In light of Ambassador Shapiro’s egregious comments while Jews are being attacked and murdered every day by Palestinian Arab terrorists, I feel compelled to state the following.

In the Spring of 2011, I was personally asked by Dan Shapiro, with whom I had many conversations, to endorse him for his nomination as US Ambassador to Israel. I cautiously agreed to a qualified support.

During Shapiro’s May 4, 2011 confirmation hearing before the U.S. Senate Committee on Foreign Relations, then-Senator Joseph Lieberman stated that he was impressed by the range of endorsements for Shapiro’s nomination, and expressly mentioned the Zionist Organization of America’s endorsement of Shapiro.

I must painfully and regretfully now conclude that I was mistaken to support Ambassador Shapiro’s appointment in 2011.

ZOA’s qualified endorsement in 2011 also explained that Shapiro was the “best possible choice” out of the candidates whom President Obama was considering for the position.   Troubling aspects of Shapiro’s record included Shapiro telling ZOA that he opposed moving the U.S. Embassy to Jerusalem when Shapiro served as Senator Dianne Feinstein’s legislative aide, and Shapiro apparently originating the idea for the “presidential waiver” provision that Senator Feinstein inserted into the Jerusalem Embassy Act of 1995.   The waiver provision has enabled U.S. presidents to avoid following the legal requirement to move the U.S. embassy to Jerusalem.  Unfortunately, the other candidates considered by President Obama in 2011 had even more troubling records.   In light of Ambassador Shapiro’s comments yesterday, ZOA now wonders whether Shapiro turned out to be no better than the other potential Obama nominees. The Zionist Organization of America formally and regretfully retracts our previous public support for Daniel Shapiro to become the US Ambassador to Israel.

We would love to hear from you! Please fill out this form and we will get in touch with you shortly.
Trending Z
News January 20, 2016
ZOA Condemns U.S. State Dept. & U.S. Amb. Nides For Siding with Antisemitic, Discriminatory Palestinian & Hamas Terrorists re: the Temple Mount, Violating Jews’ Religious Freedom
News January 20, 2016
ZOA’s Klein JPost Op-Ed: There is Nothing Extreme About Israel’s New Government
Uncategorized January 20, 2016
FLASH: ISRAEL-JORDAN PEACE TREATY (1994) GUARANTEES JEWS ACCESS TO THE TEMPLE MOUNT – LET MY PEOPLE PRAY
Uncategorized January 20, 2016
ZOA Analysis: Most American Rabbis Who Are Boycotting Some Israeli Ministers Are From Extremist Left Wing Groups (J Street; T’ruah; JVP)
Center for Law & Justice
We work to educate the American public and Congress about legal issues in order to advance the interests of Israel and the Jewish people.
We assist American victims of terrorism in vindicating their rights under the law, and seek to hold terrorists and sponsors of terrorism accountable for their actions.
We fight anti-Semitism and anti-Israel bias in the media and on college campuses.
We strive to enforce existing law and also to create new law in order to safeguard the rights of the Jewish people in the United States and Israel.
Our Mission
ZOA STATEMENT
The ZOA speaks out for Israel – in reports, newsletters, and other publications. In speeches in synagogues, churches, and community events, in high schools and colleges from coast to coast. In e-mail action alerts. In op-eds and letters to the editor. In radio and television appearances by ZOA leaders. Always on the front lines of pro-Israel activism, ZOA has made its mark.
Related Articles
OP-ED BY: ZOA Staff ADL/Foxman’s Proclamation “Case Closed” and AIPAC’s Silence on “Chickens–t” Insult Are Troubling