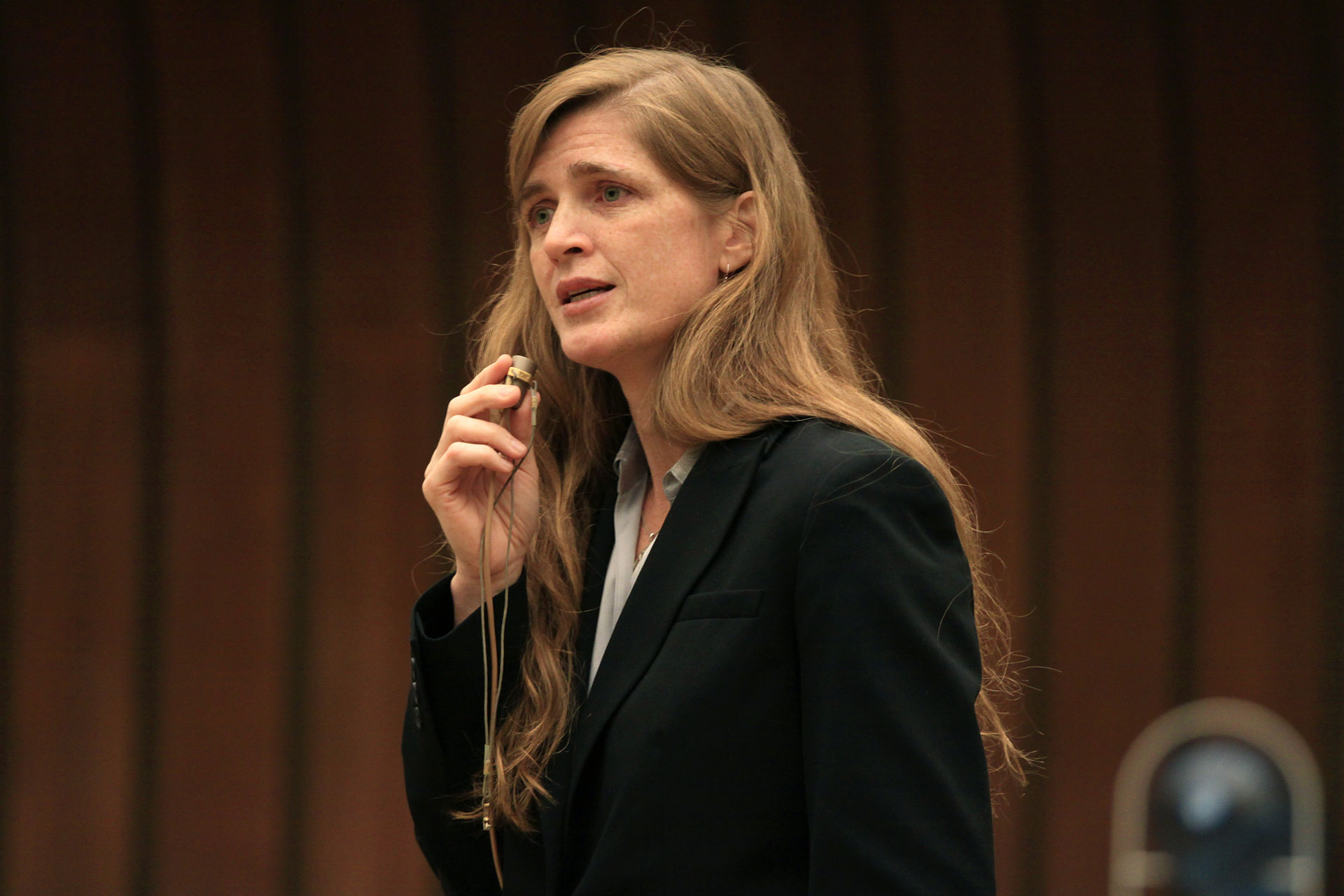 The ZOA praises the U.S. Ambassador to the United Nations, Samantha Power, for denouncing anti-Israel bias at the United Nations, particularly at the UN Human Rights Council, during the Ambassador’s address to Model UN participants at a school in Israel on Monday (February 15).   Ambassador Power noted that “Israel is just not treated like other countries,” and that UN members single out Israel for criticism.  Ambassador Power cited the UN’s rejection of Israeli rescue organization ZAKA as an example of the UN’s members singling out Israel for criticism.

[However, it was inappropriate for Ambassador Power to state to the students participating in the Model UN in Israel that she hoped that they would soon be able to sit behind a “Palestine placard.”  Palestinian Arab leaders have clearly rejected achieving peace with Israel: During a press conference in Japan the same day as Ambassador Power’s address, Palestinian Authority Foreign Minister Riyad al-Malki stated: “We will never go back and sit again in a direct Israeli-Palestinian negotiations.”   Instead, the Palestinian Authority’s leaders continue to incite knife, shooting and car ramming attacks against innocent Israelis.  A Palestinian state would make this situation worse, and would become another Gaza-style launching pad for rocket attacks against all of Israel.]

We would love to hear from you! Please fill out this form and we will get in touch with you shortly.
Trending Z
Uncategorized February 19, 2016
ZOA Analysis: Most American Rabbis Who Are Boycotting Some Israeli Ministers Are From Extremist Left Wing Groups (J Street; T’ruah; JVP)
Uncategorized February 19, 2016
ZOA: Israel’s Reasonable Judicial Reform Proposals Are Good for Democracy, the Rule of Law and the Economy
Uncategorized February 19, 2016
Israel’s “Right of Return” Grandparent Clause is De-Judaizing the Jewish State – Eliminate It
News February 19, 2016
ZOA is Disappointed, Offended and Frightened by 211 U.S. House Votes Supporting Jew-Hating, Israel-Hating Rep. Ilhan Omar
Center for Law & Justice
We work to educate the American public and Congress about legal issues in order to advance the interests of Israel and the Jewish people.
We assist American victims of terrorism in vindicating their rights under the law, and seek to hold terrorists and sponsors of terrorism accountable for their actions.
We fight anti-Semitism and anti-Israel bias in the media and on college campuses.
We strive to enforce existing law and also to create new law in order to safeguard the rights of the Jewish people in the United States and Israel.
Our Mission
ZOA STATEMENT
The ZOA speaks out for Israel – in reports, newsletters, and other publications. In speeches in synagogues, churches, and community events, in high schools and colleges from coast to coast. In e-mail action alerts. In op-eds and letters to the editor. In radio and television appearances by ZOA leaders. Always on the front lines of pro-Israel activism, ZOA has made its mark.
Related Articles
OP-ED BY: ZOA ZOA Applauds & Supports Letter From 15 Senators Urging Pres. Obama To Withdraw Hagel’s Nomination

OP-ED BY: Morton A. Klein, ZOA Jerusalem is Holy to Jews, Not to Muslims