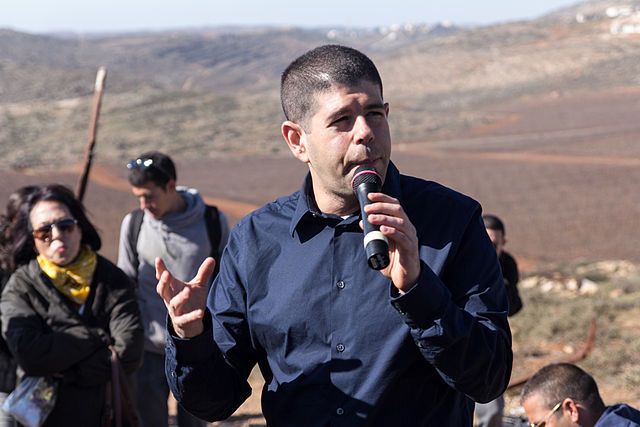 Yariv Oppenheimer, the leader of Peace Now in Israel, has provided a rationale for Palestinian Arabs murdering, stabbing, and car-ramming innocent Jews.

In a recent Op-Ed in YNET, Oppenheimer wrote, “Terrorism can be condemned all day and all night, but in order to neutralize it we must study its motives and deal with its root causes.” Oppenheimer went on to say that Palestinian terrorism (which he refers to as their “struggle,” distinguishing it from “ISIS-type terrorism”) “is basically driven by the national Palestinian aspiration for independence and liberation from the Israeli occupation.”

Oppenheimer added, “Their [Palestinian] struggle is not driven by a desire to destroy Israel, but by a desire to live in dignity.” But, a poll that was published this week (March 7, 2016) by Dr. Khalil Shikaki at the Palestinian Center for Policy and survey research showed that by 58% to 39% Palestinians believe the Palestinian Authority does not support Israel’s right to exist. Another poll by An-Najah National University Center for Polls showed that 73% of Palestinians reject the creation of a Palestinian State on 1967 borders, with land exchanges as a solution to the Palestinian cause. A poll by the Washington Institute for Near East Policy released in September 2014 revealed that 60% of Palestinians reject accepting Israel’s existence completely, and that 67% support continued “resistance” [i.e. terrorism]. A July 2011 Pew Poll revealed a staggering 73% agree with the Hadith (Islamic tradition) quoted in the Hamas charter to kill all Jews.

Another poll by An-Najah National University Center for Polls showed that 73% of Palestinians reject the creation of a Palestinian State on 1967 borders, with land exchanges as a solution to the Palestinian cause.

According to the British Israel Communications and Research Center, and Prime Minister Netanyahu the reasons for Palestinian Arabs murdering Jews are:

“[Palestinian Arabs] are fixated with false rumors that Israel was violating the Muslim holy places in Jerusalem. Later, attackers were obsessed with avenging the death of martyrs who they believed had been executed by Israeli forces. Palestinian media and Hamas repeatedly lied that Palestinians, who had been killed as they launched attacks against Israelis, were in fact being executed. The Palestinian President Abbas even repeated the charge, citing the case of a young boy whom he said had been executed, but who was alive and being treated in an Israeli hospital. Palestinian groups have filled twitter feeds and Facebook pages with gruesome images and Anti-Semitic cartoons of Jews being stabbed.”

“Every leader has a choice and Abbas and his ministers chose to ride the wave rather than challenge it. Every time he praises a martyr, the deal that we all want to see, one that establishes a Palestinian state alongside Israel, will drift further into the distance. The young Palestinians are exposed to this radicalizing material not only on social media. When they interact with the official institutions of their society, far from hate being challenged, it is reinforced. At school, terrorists are treated as heroes. In the media they are told the attacks are glorious feats. Just this week, official Palestinian TV described the Jaffa attacker as a martyr carrying out a complex operation. PA salaries are paid to convicted terrorists. Palestinian President Abbas never condemns the attacks or suggests that perhaps his people should stop trying to kill Israelis. Instead he echoes the prevailing narrative. Just last week he was reported to have sent a condolence letter to a recent attacker’s family.”

“Critics of Israel say that these young Palestinians are frustrated and the absence of a peace deal has increased humiliation. But clearly something else is also going on. They are launching these attacks because the prevailing moral code is signaling that it’s a highly honorable thing to do. As for Abbas, some say he lacks power and legitimacy. Nonsense. Every leader has a choice and Abbas and his ministers chose to ride the wave rather than challenge it.”

ZOA President Morton A. Klein said, “We strongly urge Peace Now’s Oppenheimer to stop giving a false rationale for Palestinian Arabs murdering and maiming Jews. It is surely not because they long for a state. Israeli Prime Minister Ehud Barak and Ehud Olmert offered the Palestinians a state which they turned down without a counteroffer.

PA President Abbas’ Fatah Charter still calls for “armed struggle” and “armed revolution” against Israel, nine times, and affirms that “armed struggle in the only way to liberate Palestine.”

PA ambassadors throughout the world have called for Israel’s destruction. And, many times PA leaders such as Tawfiq Tirawi have said “The 2-state solution does not exist … we must return to the option of one Palestine from the Jordan River to the Mediterranean Sea.”

We would love to hear from you! Please fill out this form and we will get in touch with you shortly.
Trending Z
Uncategorized March 17, 2016
ZOA Analysis: Most American Rabbis Who Are Boycotting Some Israeli Ministers Are From Extremist Left Wing Groups (J Street; T’ruah; JVP)
News March 17, 2016
ZOA is Disappointed, Offended and Frightened by 211 U.S. House Votes Supporting Jew-Hating, Israel-Hating Rep. Ilhan Omar
Uncategorized March 17, 2016
ZOA: Israel’s Reasonable Judicial Reform Proposals Are Good for Democracy, the Rule of Law and the Economy
Uncategorized March 17, 2016
Israel’s “Right of Return” Grandparent Clause is De-Judaizing the Jewish State – Eliminate It
Center for Law & Justice
We work to educate the American public and Congress about legal issues in order to advance the interests of Israel and the Jewish people.
We assist American victims of terrorism in vindicating their rights under the law, and seek to hold terrorists and sponsors of terrorism accountable for their actions.
We fight anti-Semitism and anti-Israel bias in the media and on college campuses.
We strive to enforce existing law and also to create new law in order to safeguard the rights of the Jewish people in the United States and Israel.
Our Mission
ZOA STATEMENT
The ZOA speaks out for Israel – in reports, newsletters, and other publications. In speeches in synagogues, churches, and community events, in high schools and colleges from coast to coast. In e-mail action alerts. In op-eds and letters to the editor. In radio and television appearances by ZOA leaders. Always on the front lines of pro-Israel activism, ZOA has made its mark.
Related Articles
OP-ED BY: Morton A. Klein, ZOA Jerusalem is Holy to Jews, Not to Muslims