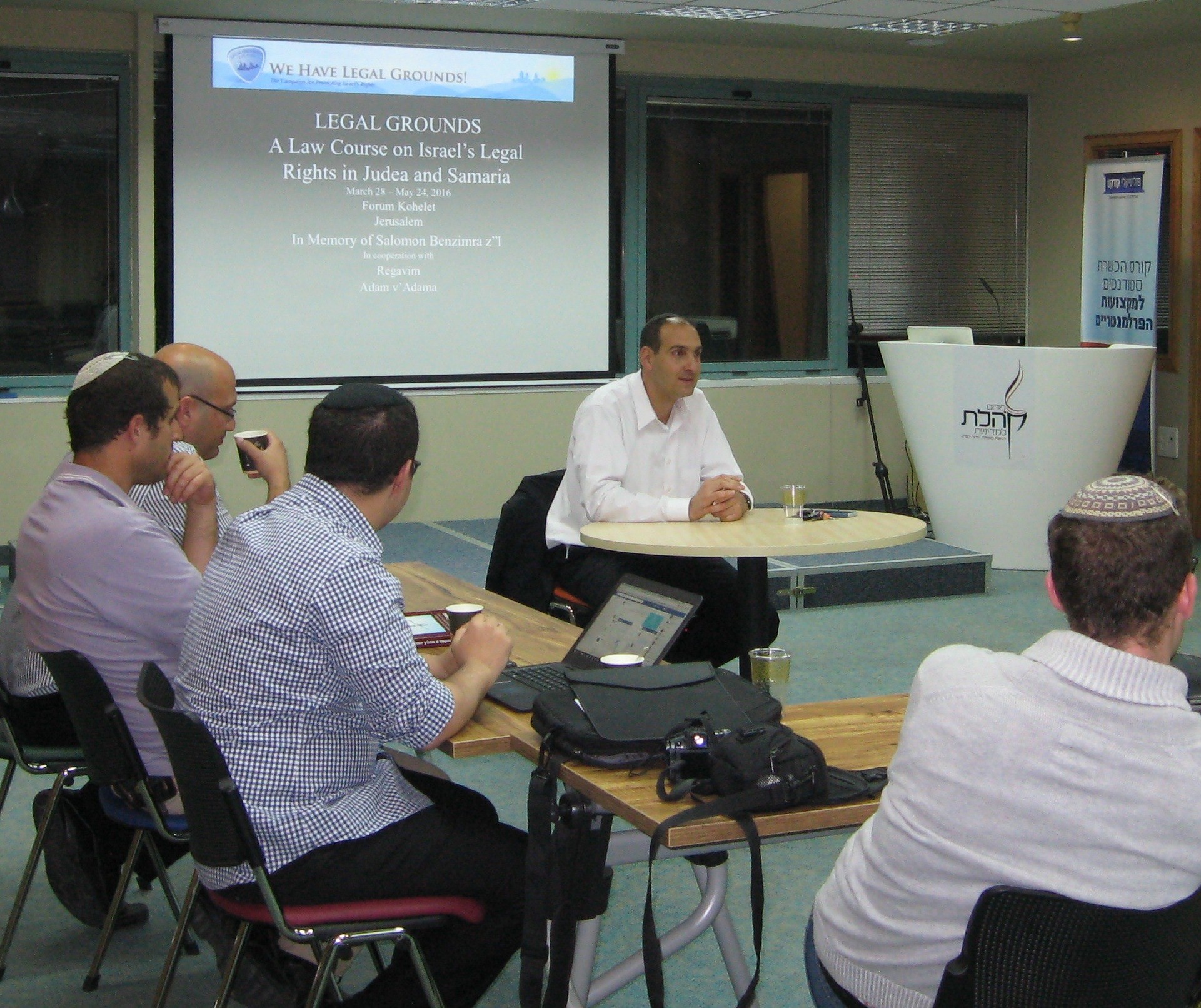 Distinguished experts in international law have been tapped by the Legal Grounds Campaign, which is co-chaired by ZOA Israel Director Jeff Daube, to teach select Israeli students in law and international relations about Israel’s legal rights, especially as applied to administration, residence and development in Judea and Samaria. The brand new Salomon Benzimra Memorial Law Course, named after the recently deceased scholarly co-founder of Canadians for Israel’s Legal Rights, will provide information and analyses from a number of angles justifying Israel’s legal land claims in this much disputed location.

Despite having been amply established by international law, Israel’s rights tend to be overlooked or misunderstood even by Israel’s strongest supporters. This is in part due to the reality that well educated professionals often lack the basic knowledge required to speak competently on this critical subject. Legal Grounds aims to tackle this inadequacy by imparting legal facts and principles the students can use as they embark on their respective relevant careers and represent Israel in the public sphere.

Unfortunately, for too long Israel’s leaders have been reluctant to openly embrace the idea that Israel has superior claims under international law.

The student group selected, primarily comprised of Israeli law students, was narrowed down from an array of outstanding applicants. Adi Arbel, Project Manager at the Institute for Zionist Strategies and one of the lecturers, praised the participants, saying “This is a group of highly qualified students, who will be in leadership positions in the future. Giving them the tools to understand the legal issues surrounding Israel is of utmost importance. Their enthusiasm for learning about these issues is a source of great optimism for us.”

Enthusiasm has been expressed for the law course in the halls of Knesset as well, where the Legal Grounds Campaign is most active. For example, as most recently shared with Daube by MK Amir Ohana (Likud), who said, “Unfortunately, for too long Israel’s leaders have been reluctant to openly embrace the idea that Israel has superior claims under international law. This is a security concern as much as a problem of public diplomacy. I was therefore so pleased to learn about this new law course that Legal Grounds is organizing, along with the group’s other beneficial activities, in order to address this dangerous deficiency.”

Ohana, himself an outspoken defender of Israel’s rights as a member of the Knesset’s prestigious Foreign Affairs and Defense Committee, wowed a Fresh Meadows, NY audience Sunday on this very topic. His presentation emerged from a conversation he had earlier with ZOA’s Israel Office, and was greatly facilitated as well by ZOA Development Director Howard Katzoff, and by ZOA Special Projects and Long Island-Queens Director Liz Berney. ZOA professionals are advancing Israel legal rights principles in tandem on the U.S. side, as are other pro-Israel groups ZOA Israel/Legal Grounds is advising, hailing from Europe, Australia, and Benzimra’s Canada.

Benzimra had passed away suddenly last month while making his way back from Israel following a visit to promote Israel’s legal rights among government ministers and policy makers. Arlene Kushner, co-chair of Legal Grounds with Daube, reflected, “Naming the course in memory of Salomon Benzimra z”l is so very appropriate. I knew Salomon, a soft-spoken and modest person, for years, and was always impressed with his devotion to teaching about Israel’s rights. I was doubly shaken by the news of his recent death, because I and my co-chair Jeff Daube had met with him in a Jerusalem café just one day before his passing. When we sat with him that day, we imagined many years of cooperative work before us. Now, as we carry on, we will remember him.”

The Legal Grounds Campaign is especially grateful to Forum Kohelet, Regavim, and its Adam V’Adama Institute for Zionist Law for their assistance with the law course design and practical arrangements. Said Daube, “By pooling our numerous resources to educate young lawyers-to-be on Israel’s rights, among other Legal Grounds initiatives we’re pursuing multilaterally, we believe we can make a helpful contribution to Israel’s standing in the world not to mention its security.”

Given the positive feedback all around, and dearth of alternatives to programs that spread lies and misconceptions endangering Israel, Legal Grounds appears to be on the right track for making an important difference.

We would love to hear from you! Please fill out this form and we will get in touch with you shortly.
Trending Z
News April 11, 2016
ZOA Condemns U.S. State Dept. & U.S. Amb. Nides For Siding with Antisemitic, Discriminatory Palestinian & Hamas Terrorists re: the Temple Mount, Violating Jews’ Religious Freedom
News April 11, 2016
ZOA’s Klein JPost Op-Ed: There is Nothing Extreme About Israel’s New Government
Uncategorized April 11, 2016
FLASH: ISRAEL-JORDAN PEACE TREATY (1994) GUARANTEES JEWS ACCESS TO THE TEMPLE MOUNT – LET MY PEOPLE PRAY
Uncategorized April 11, 2016
ZOA Analysis: Most American Rabbis Who Are Boycotting Some Israeli Ministers Are From Extremist Left Wing Groups (J Street; T’ruah; JVP)
Center for Law & Justice
We work to educate the American public and Congress about legal issues in order to advance the interests of Israel and the Jewish people.
We assist American victims of terrorism in vindicating their rights under the law, and seek to hold terrorists and sponsors of terrorism accountable for their actions.
We fight anti-Semitism and anti-Israel bias in the media and on college campuses.
We strive to enforce existing law and also to create new law in order to safeguard the rights of the Jewish people in the United States and Israel.
Our Mission
ZOA STATEMENT
The ZOA speaks out for Israel – in reports, newsletters, and other publications. In speeches in synagogues, churches, and community events, in high schools and colleges from coast to coast. In e-mail action alerts. In op-eds and letters to the editor. In radio and television appearances by ZOA leaders. Always on the front lines of pro-Israel activism, ZOA has made its mark.
Related Articles
OP-ED BY: ZOA Staff P.A.’s Abbas Confers Highest Award On Terrorist Leader Al-Wazir, Calling Him “Martyr,” “Model Of a True Fighter”