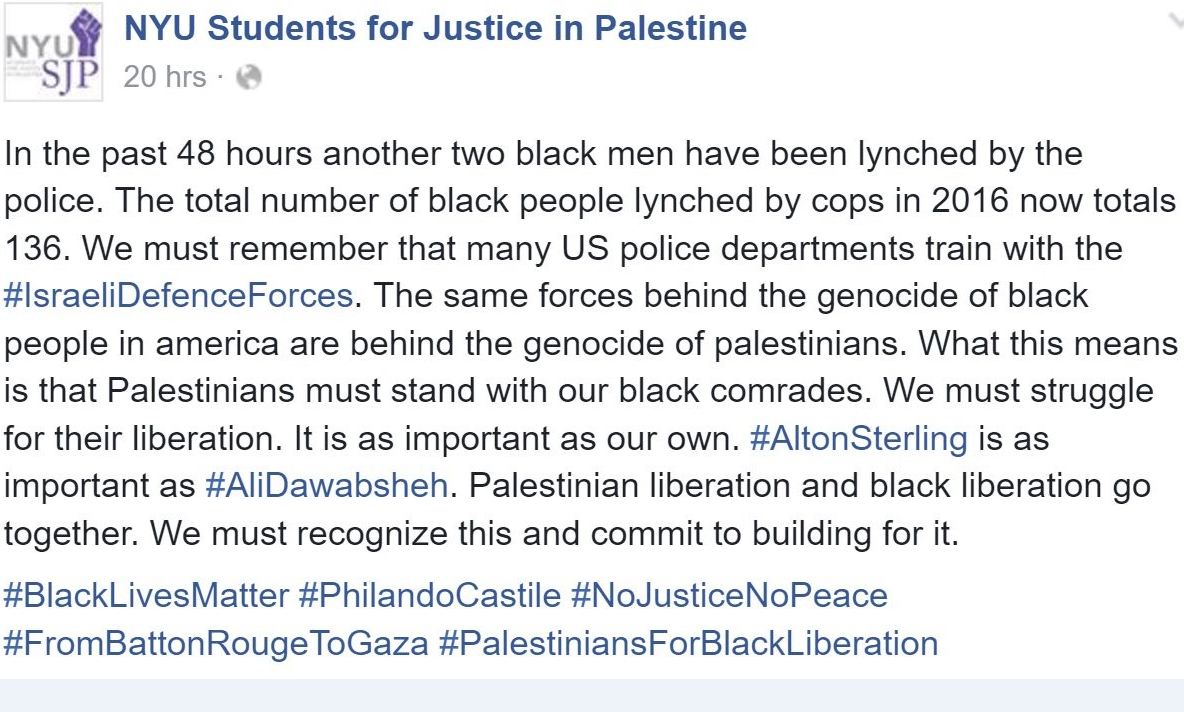 We write on behalf of the Zionist Organization of America (ZOA), the oldest and one of the largest pro-Israel organizations in the U.S., whose leaders have included U.S. Supreme Court Justice Louis Brandeis, Rabbi Stephen Wise, and Rabbi Dr. Abba Hillel Silver.  Much of ZOA’s work is dedicated to fighting anti-Semitism in all its forms, in schools and on college campuses.

We thank you for showing strong moral leadership and urge you to speak out again against actions that are contrary to NYU’s core principles:  Yesterday, on its Facebook page, NYU’s Students for Justice in Palestine (SJP) chapter posted, in relevant part:

In the past 48 hours another two black men have been lynched by the police.  The total number of black people lynched by cops in 2016 now totals 136.  We must remember that many US police departments train with the #IsraeliDefenceForces [sic].  The same forces behind the genocide of black people in america are behind the genocide of palestinians. . . .

The SJP, an anti-Semitic hate group with a history of harassing and intimidating Jewish students at NYU and on other campuses, is publicly promoting the absurd anti-Semitic lie that Israel is responsible for racism against African Americans in the U.S. and, outrageously, that Israel is responsible for the so-called “genocide of black people in America.”  Blaming the one Jewish state in the world for the oppression of African Americans – a problem that existed long before the State of Israel was established in 1948 – is anti-Semitism, according to U.S. government standards.  (See http://www.state.gov/documents/organization/156684.pdf.)

All of us should be sickened by the SJP’s despicable tactics, not only lying about Israel’s actions toward the Palestinian Arabs, but also nefariously using Israel as the scapegoat for problems of racism in this country – problems which Israel could not possibly have anything to do with.  How ludicrous it is for the SJP to claim that Israel would do anything to hurt the black community in this country when Israel dedicated enormous resources and endangered its own pilots by sending plane after plane to Ethiopia to rescue thousands of Ethiopian Jews from oppression, bringing them to Israel where they are full citizens and a vital part of Israeli society.

Blaming the one Jewish state in the world for the oppression of African Americans – a problem that existed long before the State of Israel was established in 1948 – is anti-Semitism, according to U.S. government standards.

This is not the first time that NYU’s SJP has blamed local problems on Israel with lies.  Last November, this hate group signed a statement falsely accusing the so-called “Zionist administration” at the City University of New York (CUNY) of being responsible for tuition costs and student debt.  (As you may know, the ZOA’s 14-page letter to CUNY officials, detailing the SJP’s history of anti-Semitic harassment and intimidation on four CUNY campuses, received intense media coverage and triggered the CUNY leadership’s decision to retain independent counsel to investigate campus incidents of anti-Semitism and CUNY’s response to it.  The investigation is ongoing.)

There is no question that the SJP’s false accusations against Israel violate NYU’s principles and values.  The University makes it clear that it is committed to a campus community free from bias or harassment.  Students and student groups “are expected to conduct themselves in a manner that demonstrates mutual respect for the rights and personal/academic well-being of others, preserves the integrity of the social and academic environment, and supports the mission of the University.”  The University also makes it clear that it “has an inherent right to address behavior that impedes, obstructs, or threatens the maintenance of order and attainment of the aforementioned goals.”  (See http://www.nyu.edu/life/student-life/student-communitystandards/university-student-conduct-policies.html.)

Accordingly, as the leader of the NYU community, you have the right – and respectfully, the moral duty – to speak out against the SJP and the anti-Semitic lies it is deliberately and maliciously promoting to incite hatred of Jews and Israel.  None of us should remain silent and tolerate this bigotry.  It is up to you to take a leadership role:  Please educate – and elevate – your community by condemning the SJP and its bigoted, anti-Semitic actions.  In addition, we urge you to demand that the SJP issue an apology for promoting anti-Semitic falsehoods that are hateful and divisive, in violation of the principles and values of the NYU community.

We would love to hear from you! Please fill out this form and we will get in touch with you shortly.
Trending Z
News July 11, 2016
ZOA Condemns U.S. State Dept. & U.S. Amb. Nides For Siding with Antisemitic, Discriminatory Palestinian & Hamas Terrorists re: the Temple Mount, Violating Jews’ Religious Freedom
News July 11, 2016
ZOA’s Klein JPost Op-Ed: There is Nothing Extreme About Israel’s New Government
Uncategorized July 11, 2016
FLASH: ISRAEL-JORDAN PEACE TREATY (1994) GUARANTEES JEWS ACCESS TO THE TEMPLE MOUNT – LET MY PEOPLE PRAY
Uncategorized July 11, 2016
ZOA Analysis: Most American Rabbis Who Are Boycotting Some Israeli Ministers Are From Extremist Left Wing Groups (J Street; T’ruah; JVP)
Center for Law & Justice
We work to educate the American public and Congress about legal issues in order to advance the interests of Israel and the Jewish people.
We assist American victims of terrorism in vindicating their rights under the law, and seek to hold terrorists and sponsors of terrorism accountable for their actions.
We fight anti-Semitism and anti-Israel bias in the media and on college campuses.
We strive to enforce existing law and also to create new law in order to safeguard the rights of the Jewish people in the United States and Israel.
Our Mission
ZOA STATEMENT
The ZOA speaks out for Israel – in reports, newsletters, and other publications. In speeches in synagogues, churches, and community events, in high schools and colleges from coast to coast. In e-mail action alerts. In op-eds and letters to the editor. In radio and television appearances by ZOA leaders. Always on the front lines of pro-Israel activism, ZOA has made its mark.
Related Articles
OP-ED BY: ZOA Staff J Street Poll Shows 72% of American Jews Support Building in Judea/Samaria