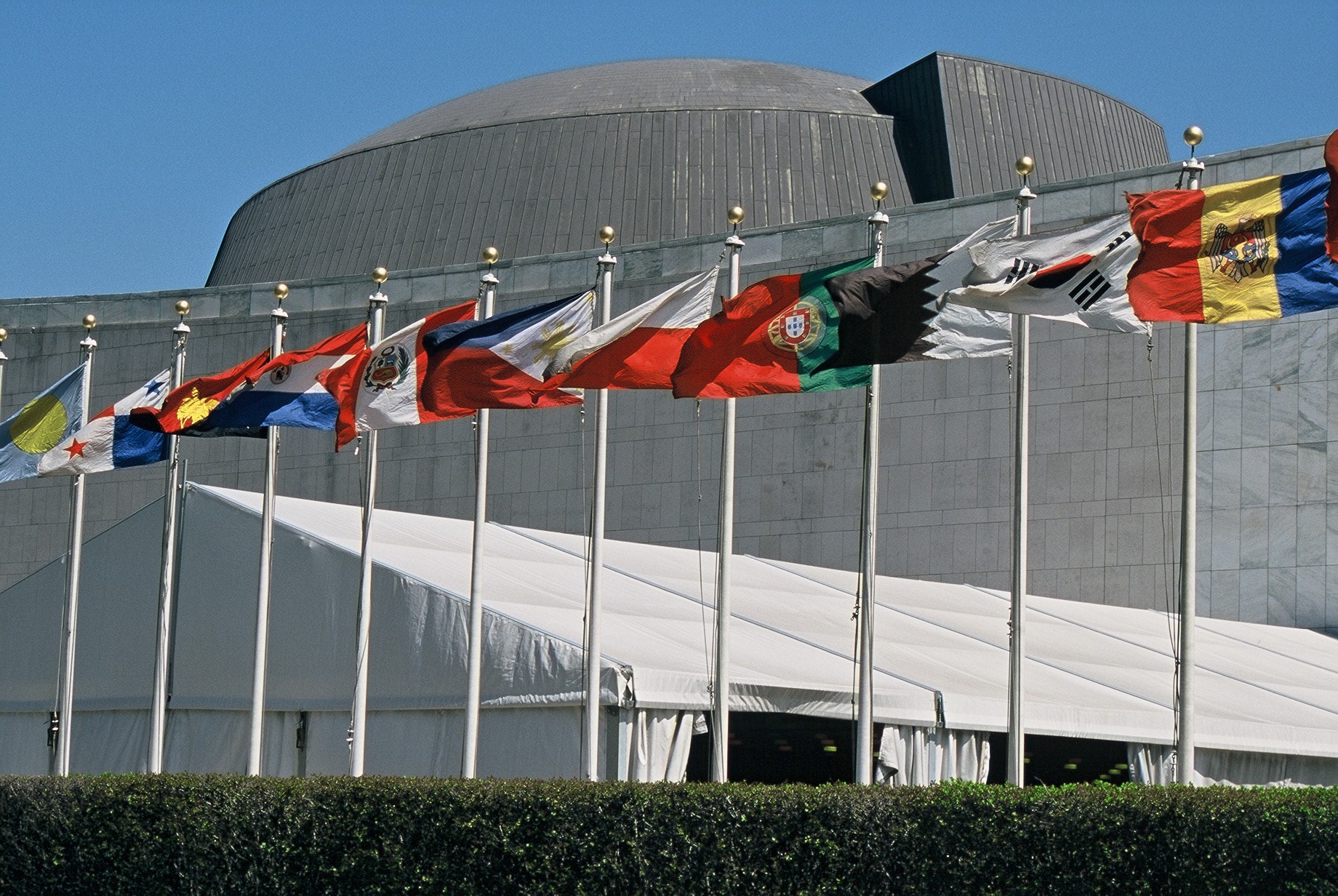 The Zionist Organization of America (ZOA) has condemned the resolution passed by the 21-member World Heritage Committee of the United Nations Educational, Scientific and Cultural Organization (UNESCO) by a vote of 10 to two with eight abstentions and one absence, airbrushing from history and thus denying Judaism and the Jewish people’s historic connection to Jerusalem’s Temple Mount.

The ZOA has praised the Philippines and Tanzania for voting against this resolution, as well as the Czech Republic’s Chamber of Deputies, which voted 119-4 to condemn the UNESCO resolution which “discredits” UNESCO’s “neutrality” and “strengthens the international anti-Semitic tendencies.” The U.S., which is not a member of the Committee that passed the resolution, has criticized the vote as it “undermine[s] support for the very legitimacy of this organization” and “urge[s] the members to embrace an approach in which we can all work together,” but the ZOA has called upon President Obama to publicly condemn this vote as an anti-Semitic travesty of history.

The resolution was somewhat less anti-Jewish than originally intended by its sponsors, referring to the Western Wall by name, not merely in quotation marks or parentheses and renamed the Buraq Wall, as in some past UNESCO votes. Nonetheless, with regard to Temple Mount, the resolution mentions neither the Hebrew term for the site –– Har HaBayit –– nor its English equivalent. As with the preliminary resolution passed by UNESCO earlier this month, the Temple Mount is referred to only by its Muslim name, Al Haram Al Sharif, recording only its sanctity to Islam.

This resolution is nothing other than part of the Palestinian, Arab and indeed international campaign to delegitimize Israel’s existence, and to increase the likelihood of boycotts and sanctions based on monstrous lies.

The resolution was supported by the Muslim states, Azerbaijan, Indonesia, Kazakhstan, Kuwait, Lebanon, Tunisia and Turkey, as well as by Angola, Cuba and Vietnam. It was opposed by the Philippines and Tanzania, while Burkina Faso, Croatia, Finland, Peru, Poland, Portugal, South Korea and Zimbabwe abstained (Tovah Lazaroff, ‘In dramatic vote, UNESCO Jerusalem resolution passes with slim support,’ Jerusalem Post, October 26, 2016).

“It would be hard to think of a historical and religious connection, like the millennial Jewish connection to Jerusalem and the Temple Mount, that is older, stronger or better documented.

“Continual archaeological discoveries, of which last month’s discovery of a weight bearing the name of a Second Temple-era high priest is but the most recent,  confirm, still further, the truth of this connection.

“These discoveries have proceeded despite efforts by the Muslim wake to destroy archaeological evidence beneath the Temple Mount over the years.

“There is a reason that Temple Mount has been immemorially called by that name, rather than ‘Mosque Mount’ or some other name associated with the 7th century Muslim conquest of Jerusalem.

“Jerusalem possesses sites that are sacred to other faiths, yet there is simply no denying the fact that these sites became sacred to these faiths purely as a result of Jerusalem’s, especially the Temple Mount’s, prior Jewish sanctity.

“This resolution is nothing other than part of the Palestinian, Arab and indeed international campaign to delegitimize Israel’s existence, and to increase the likelihood of boycotts and sanctions based on monstrous lies endorsed by resolutions of this type by international organizations.

“As we noted at the time of the UNESCO preliminary resolution earlier this month, UNESCO’s ignoring the Jewish identity of religious and historical sites is particularly egregious and sinister in the case of the Western Wall and Rachel’s Tomb, as Muslim claims to each were first made only during the 1929 Arab attacks upon Jews across British-controlled Palestine in 1929. Until then, the Islamic tradition of Mohammed’s ascent to heaven on his steed, Buraq was associated with the eastern and southern retaining walls of Temple Mount, not the Western Wall; while it was only in 1996 that the Muslim waqf began to refer to Rachel’s Tomb as the Bilal ibn Rabah mosque, a name previously unknown to history, as has been documented in scholarly detail by Nadav Shragai for the Jerusalem Center for Public Affairs in his 2007 report, ‘The Palestinian Authority and the Jewish Holy Sites in the West Bank: Rachel’s Tomb as a Test Case.’

“This resolution reminds me of Abba Eban’s observation that, ‘If Algeria introduced a resolution declaring that the earth was flat and that Israel had flattened it, it would pass by a vote of 164 to 13 with 26 abstentions.’

“UNESCO should desist from enabling outright, proven Palestinian historical fabrications and lies about the Jewish and Muslim connections to parts of Israel. It should cease and desist from tabling pernicious and absurd, flat-earth resolutions like this one, which not only bring it into disgrace and disrepute, but help fuel anti-Israel terror and jihad.

“After all, if Jerusalem has no connection to Jews and Israel, then Palestinian propaganda lies about the Jewish people’s lack of connection and rights to the land, deployed to utilize their recourse to terrorism and refusal make peace, are falsely validated.

“We call upon the Obama Administration to publicly condemn this resolution as the pernicious, anti-Semitic, historical travesty that it is.”

We would love to hear from you! Please fill out this form and we will get in touch with you shortly.
Trending Z
Uncategorized October 26, 2016
FLASH: ISRAEL-JORDAN PEACE TREATY (1994) GUARANTEES JEWS ACCESS TO THE TEMPLE MOUNT – LET MY PEOPLE PRAY
Uncategorized October 26, 2016
ZOA Analysis: Most American Rabbis Who Are Boycotting Some Israeli Ministers Are From Extremist Left Wing Groups (J Street; T’ruah; JVP)
Uncategorized October 26, 2016
Israel’s “Right of Return” Grandparent Clause is De-Judaizing the Jewish State – Eliminate It
Uncategorized October 26, 2016
Exclusive: ZOA Accuses Ilhan Omar of Hating the U.S. ‘as Much as Israel,’ Lauds Kevin McCarthy for ‘Throwing Her Off the HFAC’
Center for Law & Justice
We work to educate the American public and Congress about legal issues in order to advance the interests of Israel and the Jewish people.
We assist American victims of terrorism in vindicating their rights under the law, and seek to hold terrorists and sponsors of terrorism accountable for their actions.
We fight anti-Semitism and anti-Israel bias in the media and on college campuses.
We strive to enforce existing law and also to create new law in order to safeguard the rights of the Jewish people in the United States and Israel.
Our Mission
ZOA STATEMENT
The ZOA speaks out for Israel – in reports, newsletters, and other publications. In speeches in synagogues, churches, and community events, in high schools and colleges from coast to coast. In e-mail action alerts. In op-eds and letters to the editor. In radio and television appearances by ZOA leaders. Always on the front lines of pro-Israel activism, ZOA has made its mark.
Related Articles
OP-ED ZOA: Brookings Institution Must Return $14 Million To Qatar, Supporter of ISIS