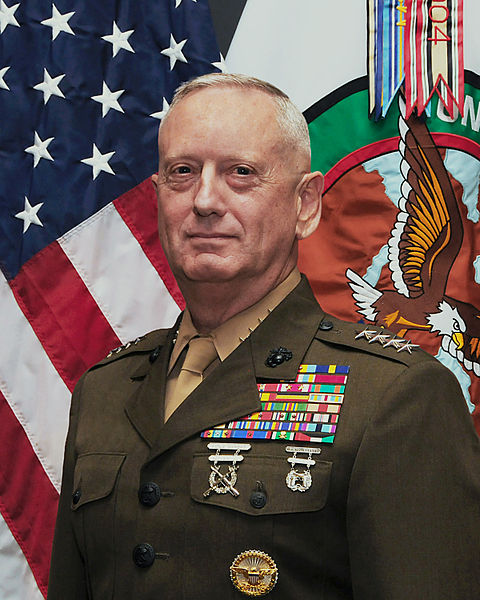 The ZOA is concerned about the potential appointment of Marine General James Mattis as Secretary of Defense, and urges that Mattis not be appointed. Mattis’s statements at a 2013 Aspen Institute conference were hostile to Israel, and revealed a lack of appreciation for and understanding of the extraordinary value to American security resulting from a strong American-Israeli alliance and a secure Israel.

At the Aspen conference, after Wolf Blitzer asked Mattis: “Is this Israeli-Palestinian peace process going anywhere?,” Mattis responded:  “That will depend on the protagonists,  and do they want it as much as I think our valiant Secretary of State wants it” and then launched into a gratuitous, one-sided attack on Israeli “settlements” complete with false “apartheid” claims.  (The conference video is embedded into the article “Trump’s Likely Defense Secretary Raised Eyebrows in Israel,” by David Rosenberg, Israel Nat’l News, Nov. 16, 2016.)

It is also extremely concerning that Mattis portrayed the Israeli-American alliance pejoratively, as a counterproductive “bias.”

Mattis portrayed “settlements” as consisting of, for example, sitting in Jerusalem and putting “500 Jewish settlers” to the east of an area with “10,000 Arab settlers.”   Mattis then wrongly asserted that this would either end Israel’s Jewish character or result in apartheid.   Mattis’s statement and “example” ignored that the Jewish so-called “settlements” include cities and communities of thousands of Jews (approximately 20,000 in Ariel; 50,000 in Beitar Illit; 40,000 in Ma’ale Adumim; 9,000 in Efrat; 17,000 in Givat Zeev; 7,600 in Kiryat Arba; 65,000 in Modi’in Illit, etc.) in the Jewish historic homeland, in strategic locations overlooking Israel’s major cities.  Jewish communities comprise only 2% of Judea and Samaria.   Israel could clearly incorporate settlement areas with no demographic or apartheid issue.

Mattis also ignored that Israel turned over 40% of Judea and Samaria, and all of Gaza to Palestinian Authority (PA) control, and that 99% of Palestinian-Arabs in the territories live in those areas of Judea/Samaria that are under Palestinian Authority control.  The PA runs its own schools, newspapers, television stations, and all other aspects of daily life in those areas, other than Israeli security operations necessitated by terrorist attacks on Israel.

In sum, Jewish settlements help keep the peace; they are not an obstacle to peace.

Alarmingly, while Mattis was quick to gratuitously wrongly blame Jewish settlements, Mattis never mentioned any of the real obstacles to peace:  Namely, the Palestinian-Arab leadership’s continuing incitement of terrorism in schools, textbooks government run-media and mosques, payments of millions of dollars to terrorists to murder Jews, promotion of PA security personnel who murder Jews; goal of destroying all of Israel; and rejection of repeated extraordinarily generous peace offers.

At the Aspen conference, Mattis also insisted on urgently creating a Palestinian-Arab state (saying: “We have got to find a way to make the two-state solution”) – while ignoring that a Palestinian state, at least at this time and in the foreseeable future – would be a Hamas-Iran-dominated terror state that threatens Israeli and U.S. security.

Mattis’ position insisting on a Palestinian terror state runs afoul of the 2016 Republican platform’s position that a comprehensive and lasting peace can only be “negotiated among those living in the region” and the platform’s clear statement: “We oppose any measures intended to impose an agreement or to dictate borders or other terms. . . . Our party is proud to stand with Israel now and always.”

It is also extremely concerning that Mattis portrayed the Israeli-American alliance pejoratively, as a counterproductive “bias.”

Mattis gratuitously added during his Aspen conference response regarding the prospects for an Israeli-Palestinian-Arab peace process:  “I paid a military security price every day as the commander of CENTCOM because the Americans were seen as biased in support of Israel, and that moderates, all the moderate Arabs who want to be with us, because they can’t come out publicly in support of people who don’t show respect for the Arab Palestinians.”

Interestingly, earlier during the same conference discussion, Mattis was asked about Arab states’ concerns about the Obama administration’s treatment of Mubarak and Egypt, and responded:  “The single biggest question I was dealing with, in my last year was the perceived lack of U.S. reliability as an ally. . . . We’re going to have to demonstrate reliability, because trust is what it’s all built on . . That’s the coin of the realm.    If you can’t maintain trust, then your leadership is obsolete, whether you’re a military man, a diplomatic leader, or whatever.”

It is remarkable that after acknowledging how critical it is for the U.S. to demonstrate that it stands by its allies, Mattis expressed such a hostile attitude towards standing by our ally Israel.

ZOA thus hopes that Mattis will not be appointed Secretary of Defense.

We would love to hear from you! Please fill out this form and we will get in touch with you shortly.
Trending Z
Uncategorized November 21, 2016
ZOA Analysis: Most American Rabbis Who Are Boycotting Some Israeli Ministers Are From Extremist Left Wing Groups (J Street; T’ruah; JVP)
Uncategorized November 21, 2016
ZOA: Israel’s Reasonable Judicial Reform Proposals Are Good for Democracy, the Rule of Law and the Economy
News November 21, 2016
ZOA is Disappointed, Offended and Frightened by 211 U.S. House Votes Supporting Jew-Hating, Israel-Hating Rep. Ilhan Omar
Uncategorized November 21, 2016
Israel’s “Right of Return” Grandparent Clause is De-Judaizing the Jewish State – Eliminate It
Center for Law & Justice
We work to educate the American public and Congress about legal issues in order to advance the interests of Israel and the Jewish people.
We assist American victims of terrorism in vindicating their rights under the law, and seek to hold terrorists and sponsors of terrorism accountable for their actions.
We fight anti-Semitism and anti-Israel bias in the media and on college campuses.
We strive to enforce existing law and also to create new law in order to safeguard the rights of the Jewish people in the United States and Israel.
Our Mission
ZOA STATEMENT
The ZOA speaks out for Israel – in reports, newsletters, and other publications. In speeches in synagogues, churches, and community events, in high schools and colleges from coast to coast. In e-mail action alerts. In op-eds and letters to the editor. In radio and television appearances by ZOA leaders. Always on the front lines of pro-Israel activism, ZOA has made its mark.
Related Articles
OP-ED BY: Morton A. Klein, ZOA Jerusalem is Holy to Jews, Not to Muslims