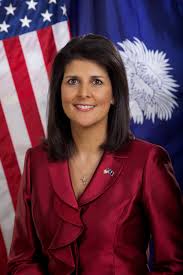 The Zionist Organization of America (ZOA) has praised the US Ambassador to the United Nations (UN), Nikki Haley, for blocking the appointment of former extremist Palestinian Authority (PA) Prime Minister, Salam Fayyad,  as UN envoy to Libya. Extremist Fayyad was nominated for the post by the new UN Secretary-General, Antonio Guterres, reportedly at the behest of the UN’s Undersecretary General for Political Affairs, former State Department bureaucrat Jeremy Feltman.

The Trump Administration blocked Fayyad’s appointment, since he was nominated as representing the non-existent –– but UN General Assembly-recognized –– state of ‘Palestine.’ Mr. Guterres’ letter to the UN Security Council president on the subject referred to nominating “Mr. Salam Fayyad (Palestine) … to succeed Mr. Martin Kobler (Germany).”

Never before had a person from a country that is not a full United Nations member been named to such high post and US law forbids funding any international organization that recognizes ‘Palestine.’ Fayyad has also taken many pro-terror actions as described below. And when I, Morton Klein, asked Fayyad at a meeting of Jewish leaders in Israel whether he would condemn the Fatah PA official emblem showing all of Israel as Palestine, with a kalyshnakov rifle over Arafat’s picture, he refused to condemn it.

The New York Sun reported that, “American officials, as well as their Israeli counterparts, sensed that Mr. Guterres’ move was yet another step in the Palestinian Authority’s strategy of gaining world recognition through creeping UN acceptance. ‘The United States does not currently recognize a Palestinian state or support the signal this appointment would send within the United Nations,’ Ambassador Haley wrote in a statement Friday night, adding she was ‘disappointed’ to see Mr. Guterres’ letter (Benny Avni,  ‘UN Erupts in an Uproar After Trump Vetoes High Post  For Ex-Premier of “Palestine,”’ New York Sun, February 11, 2017).

When I, Morton Klein, asked Fayyad at a meeting of Jewish leaders In Israel whether he would condemn And apologize for the PA Fatah emblem showing all of Israel as Palestine with a Kalyshnakov rifle over Arafat’s picture, he refused.

ZOA National President Morton A. Klein said, “We applaud the Trump Administration for acting to block the appointment of extremist Salam Fayyad as UN envoy to Libya.

“We are all-too-well acquainted with the argument that Mr. Fayyad is a competent technocrat, but that is not the issue. A much large issue is involved: whether the US should permit efforts to establish a non-existent state of ‘Palestine’ at the UN and in other international forums.

“In any event, the ZOA reminds people that Mr. Fayyad, is no real moderate.

“This is after all a PA leader who has paid condolence calls to the families of Jew-murdering terrorists.

“This is a PA leader who called for the mass release of Palestinian terrorists jailed by Israel, thus supporting letting loose hundreds of seasoned terrorists onto the streets.

“This is a PA leader whose has previously refused to address and condemn the murderous acts of terrorists operating from the PA.

“This is a PA leader who has held under his auspices a summer camp in which the participating children were divided into groups named after Palestinian terrorists Yasser Arafat, Salah Khalaf, Abu Ali Mustapha and Dalal Mughrabi.

We would love to hear from you! Please fill out this form and we will get in touch with you shortly.
Trending Z
News February 13, 2017
ZOA Condemns U.S. State Dept. & U.S. Amb. Nides For Siding with Antisemitic, Discriminatory Palestinian & Hamas Terrorists re: the Temple Mount, Violating Jews’ Religious Freedom
Uncategorized February 13, 2017
FLASH: ISRAEL-JORDAN PEACE TREATY (1994) GUARANTEES JEWS ACCESS TO THE TEMPLE MOUNT – LET MY PEOPLE PRAY
Uncategorized February 13, 2017
ZOA Analysis: Most American Rabbis Who Are Boycotting Some Israeli Ministers Are From Extremist Left Wing Groups (J Street; T’ruah; JVP)
Uncategorized February 13, 2017
Israel’s “Right of Return” Grandparent Clause is De-Judaizing the Jewish State – Eliminate It
Center for Law & Justice
We work to educate the American public and Congress about legal issues in order to advance the interests of Israel and the Jewish people.
We assist American victims of terrorism in vindicating their rights under the law, and seek to hold terrorists and sponsors of terrorism accountable for their actions.
We fight anti-Semitism and anti-Israel bias in the media and on college campuses.
We strive to enforce existing law and also to create new law in order to safeguard the rights of the Jewish people in the United States and Israel.
Our Mission
ZOA STATEMENT
The ZOA speaks out for Israel – in reports, newsletters, and other publications. In speeches in synagogues, churches, and community events, in high schools and colleges from coast to coast. In e-mail action alerts. In op-eds and letters to the editor. In radio and television appearances by ZOA leaders. Always on the front lines of pro-Israel activism, ZOA has made its mark.
Related Articles
OP-ED BY: Morton A. Klein ZOA: Iran Pres. Rouhani’s Boasting of Deceiving West on Iran’s Nuclear Weapons Program Underscores the Fraudulence of his Moderate Image