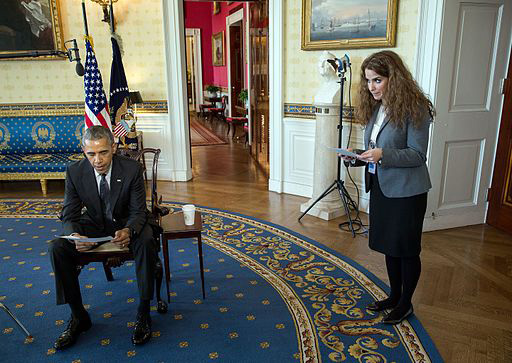 It is deeply troubling, even shocking, that Sahar Nowrouzzadeh, who promoted, coordinated and managed former President Obama’s and former Secretary Kerry’s Iran policy and the catastrophic Iran deal – and recently still praised the Obama administration for the Iran deal, while ignoring Iran’s violations – now heads the U.S. State Department’s Iran and Gulf Region policy planning staff.  ZOA strongly urges that she be replaced.

“Sahar Nowrouzzadeh, the Iran director for former President Obama’s National Security Council (NSC), has burrowed into the government under President Trump. She’s now in charge of Iran and the Persian Gulf region on the policy planning staff at the State Department. To make matters worse, Nowrouzzadeh is a former employee of the National Iranian-American Council (NIAC), a non-profit that is accused of being a lobbying group for the Iranian regime. NIAC’s current president, Trita Parsi, has long held close relationships with top officials in the Tehran dictatorship. In February, a group of over 100 prominent Iranian dissidents called for Congress to investigate NIAC’s ties to the Iranian regime. One of Nowrouzzadeh’s primary duties under President Obama was to promote initiatives that pushed the Iran deal. As President Obama’s NSC director for Iran, Nowrouzzadeh sat in on high-level briefings along with President Obama, former VP Joe Biden, and former Secretary of State John Kerry, as top White House staff crafted false narratives on the Iran deal to sell to the American public. According to the head of a state-run Iranian newspaper, Nowrouzzadeh was an essential element to pushing through the Iran deal. Editor-in-Chief Emad Abshenass said that she opened up a direct line of communication with the Iranian president’s brother. “She helped clear a number of contradictions and allowed the entire endeavor to succeed,” Abshenass said of her efforts. …”  Iran Deal Architect is Now Running Tehran Policy at the State Department,” by Jordan Schachtel, Conservative Review, Mar. 14, 2017.

Ms. Nowrouzzadeh’s January 2017 tweets and retweets are full of praise for the Obama administration – and never congratulate Trump or wish him well for becoming president.

In an interview on October 17, 2016 conducted by the Public Affairs Alliance of Iranian Americans (PAAIA), Ms. Nowrouzzadeh confirmed her key role in promoting and coordinating the Obama administration’s promotion of the Iran deal and Iran appeasement policy, stating:

“I was detailed from the State Department to the NSC at the [Obama] White House from 2014 to 2016, where I served as a Director for Iran and Iran Nuclear Implementation. The NSC is the President’s principal forum for considering national security and foreign policy matters with senior national security advisors and cabinet officials. The NSC is also responsible for coordinating these policies among various government agencies. I was part of the team that assisted in coordinating various aspects of our Iran policy among government agencies, producing research, briefings, and memos related to Iran for our senior leadership and conducting the day-to-day management of our Iran policy. . . . .

Upon returning to the State Department earlier this year, I joined the Secretary of State’s Policy Planning Staff and am currently in charge of the Iran portfolio. . . . I took on the responsibilities of the Persian Language Spokesperson during the UN General Assembly this year and may also take on the responsibilities from time to time in the future. However, my primary role at the State Department is covering the Iran portfolio on Secretary Kerry’s Policy Planning Staff.”

An examination of Ms. Nowrouzzadeh’s twitter account (handle: @saharnow) indicates her apparent continuing devotion to the Obama administration and its policies and “legacy” including the Iran deal.  For instance:

Thanks @JohnKerry for extraordinary dedication as Secretary of State.  You made a difference on Iran, Climate Change, Ukraine, Cuba.”

We pursue diplomacy not b/c naïve belief it will always succeed, but b/c we’ve seen its results: #Iran, #Ebola response & Paris climate agt.”

We would love to hear from you! Please fill out this form and we will get in touch with you shortly.
Trending Z
Uncategorized March 17, 2017
ZOA Analysis: Most American Rabbis Who Are Boycotting Some Israeli Ministers Are From Extremist Left Wing Groups (J Street; T’ruah; JVP)
Uncategorized March 17, 2017
ZOA: Israel’s Reasonable Judicial Reform Proposals Are Good for Democracy, the Rule of Law and the Economy
Uncategorized March 17, 2017
Israel’s “Right of Return” Grandparent Clause is De-Judaizing the Jewish State – Eliminate It
News March 17, 2017
ZOA is Disappointed, Offended and Frightened by 211 U.S. House Votes Supporting Jew-Hating, Israel-Hating Rep. Ilhan Omar
Center for Law & Justice
We work to educate the American public and Congress about legal issues in order to advance the interests of Israel and the Jewish people.
We assist American victims of terrorism in vindicating their rights under the law, and seek to hold terrorists and sponsors of terrorism accountable for their actions.
We fight anti-Semitism and anti-Israel bias in the media and on college campuses.
We strive to enforce existing law and also to create new law in order to safeguard the rights of the Jewish people in the United States and Israel.
Our Mission
ZOA STATEMENT
The ZOA speaks out for Israel – in reports, newsletters, and other publications. In speeches in synagogues, churches, and community events, in high schools and colleges from coast to coast. In e-mail action alerts. In op-eds and letters to the editor. In radio and television appearances by ZOA leaders. Always on the front lines of pro-Israel activism, ZOA has made its mark.
Related Articles
OP-ED BY: Morton A. Klein ZOA: Iran Pres. Rouhani’s Boasting of Deceiving West on Iran’s Nuclear Weapons Program Underscores the Fraudulence of his Moderate Image