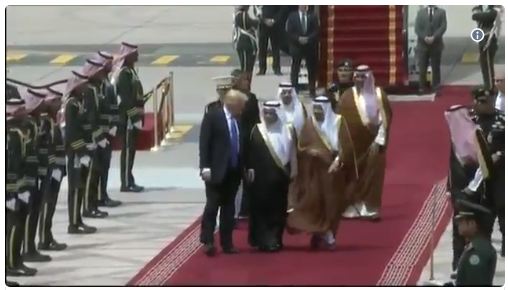 The huge 10-year $380 billion U.S.-Saudi agreement announced this past weekend raises serious concerns as to the how Israel’s Qualitative Military Edge (“QME”) will be impacted by the deal’s massive weapons sales to the Saudi Kingdom.  U.S. law provides that assuring Israel’s QME is vital to U.S. security, and requires certification that a sale or export of major defense equipment to a country in the Middle East will not adversely affect Israel’s QME.  Israel should be furnished with any needed upgrades to assure that her QME is not impaired by the Saudi sale.

ZOA appreciates and echoes the good U.S. intentions related to the weapons sale to the Saudi Kingdom.  As Secretary Tillerson put it, the deal is intended to enhance the Saudis’ ability to counteract and combat “malign Iranian influence and Iranian-related threats which exist on Saudi Arabia’s borders” and to bolster the Saudi Kingdom’s ability to “contribut[e] to counterterrorism operations across the region.”  (Id.)  In the wake of the prior U.S. administration’s catastrophic Iran deal, Iran’s malign influence is expanding, and ZOA, of course, favors efforts to curb Iran.

“This is a matter that really should trouble us… because Saudi Arabia is still a hostile country without any diplomatic relations and nobody knows what the future will be.”

On the other hand, U.S. arms provided to Middle Eastern nations with the best of intentions have too often end up being turned against U.S. forces and our allies.  This possibility must also be considered here.  This is particularly so because the deal ultimately relies on the rather thin reed of “trust.”  During his joint press conference regarding the deal, Secretary Tillerson acknowledged that the “growing partnership [with Saudi Arabia] is really grounded in trust, trust between our two nations that we are pursuing the same objectives.”  (Id.)  Objectives can change in a flash in the volatile Middle East.

In recent years, Saudi-Israeli cooperation stemming from mutual concerns about Iran has been quietly developing.  Nonetheless, hostile Saudi actions towards Israel persist.  For instance, Saudi Arabia still boycotts Israeli goods and services; backs a so-called “Arab Peace Initiative” that is a blueprint for Israel’s destruction; and denies entry to visitors who have Israeli stamps in their passports.  The potential for Saudi weapons being turned on Israel clearly exists, and our stable ally Israel must be prepared for this.

Israel is understandably concerned.  Israeli Energy Minister Yuval Steinitz stated regarding the Saudi arms deal: “This is a matter that really should trouble us… We have also to make sure that those hundreds of billions of dollars of weapons to Saudi Arabia will not, by any means, erode Israel’s qualitative edge, because Saudi Arabia is still a hostile country without any diplomatic relations and nobody knows what the future will be.”  (“Trump’s Saudi Weapons Deal May Worry Israel,” by Reuters, May 21, 2017.)

Top U.S. officials have confirmed that maintaining Israel’s QME is “critical to regional stability and as a result is fundamentally a core interest of the United States.”  (See “ZOA: Pres. Obama Questions Providing Qualitative Military Edge for Israel; [But] Assuring Israel’s QME is Also the Law, and Vital to U.S. Security,” Mar. 16, 2016.)

“Qualitative military edge’’ analysis looks at the combined capabilities of all other Middle Eastern states and non-state actors.  (QME means the ability to counter and defeat any credible conventional military threat from any individual state or possible coalition of states or from non-state actors, while sustaining minimal damages and casualties, through the use of superior military means, possessed in sufficient quantity, including weapons, command, control, communication, intelligence, surveillance, and reconnaissance capabilities that in their technical characteristics are superior in capability to those of such other individual or possible coalition of states or non-state actors.)  The U.S.-Saudi arms deal may very well alter the combined balance of power in the Middle East.

We would love to hear from you! Please fill out this form and we will get in touch with you shortly.
Trending Z
News May 22, 2017
ZOA Condemns U.S. State Dept. & U.S. Amb. Nides For Siding with Antisemitic, Discriminatory Palestinian & Hamas Terrorists re: the Temple Mount, Violating Jews’ Religious Freedom
News May 22, 2017
ZOA’s Klein JPost Op-Ed: There is Nothing Extreme About Israel’s New Government
Uncategorized May 22, 2017
FLASH: ISRAEL-JORDAN PEACE TREATY (1994) GUARANTEES JEWS ACCESS TO THE TEMPLE MOUNT – LET MY PEOPLE PRAY
Uncategorized May 22, 2017
ZOA Analysis: Most American Rabbis Who Are Boycotting Some Israeli Ministers Are From Extremist Left Wing Groups (J Street; T’ruah; JVP)
Center for Law & Justice
We work to educate the American public and Congress about legal issues in order to advance the interests of Israel and the Jewish people.
We assist American victims of terrorism in vindicating their rights under the law, and seek to hold terrorists and sponsors of terrorism accountable for their actions.
We fight anti-Semitism and anti-Israel bias in the media and on college campuses.
We strive to enforce existing law and also to create new law in order to safeguard the rights of the Jewish people in the United States and Israel.
Our Mission
ZOA STATEMENT
The ZOA speaks out for Israel – in reports, newsletters, and other publications. In speeches in synagogues, churches, and community events, in high schools and colleges from coast to coast. In e-mail action alerts. In op-eds and letters to the editor. In radio and television appearances by ZOA leaders. Always on the front lines of pro-Israel activism, ZOA has made its mark.
Related Articles
OP-ED BY: ZOA Staff New Poll: Americans By 2-To-1 Margin Blame Palestinians For Talks’ Failure