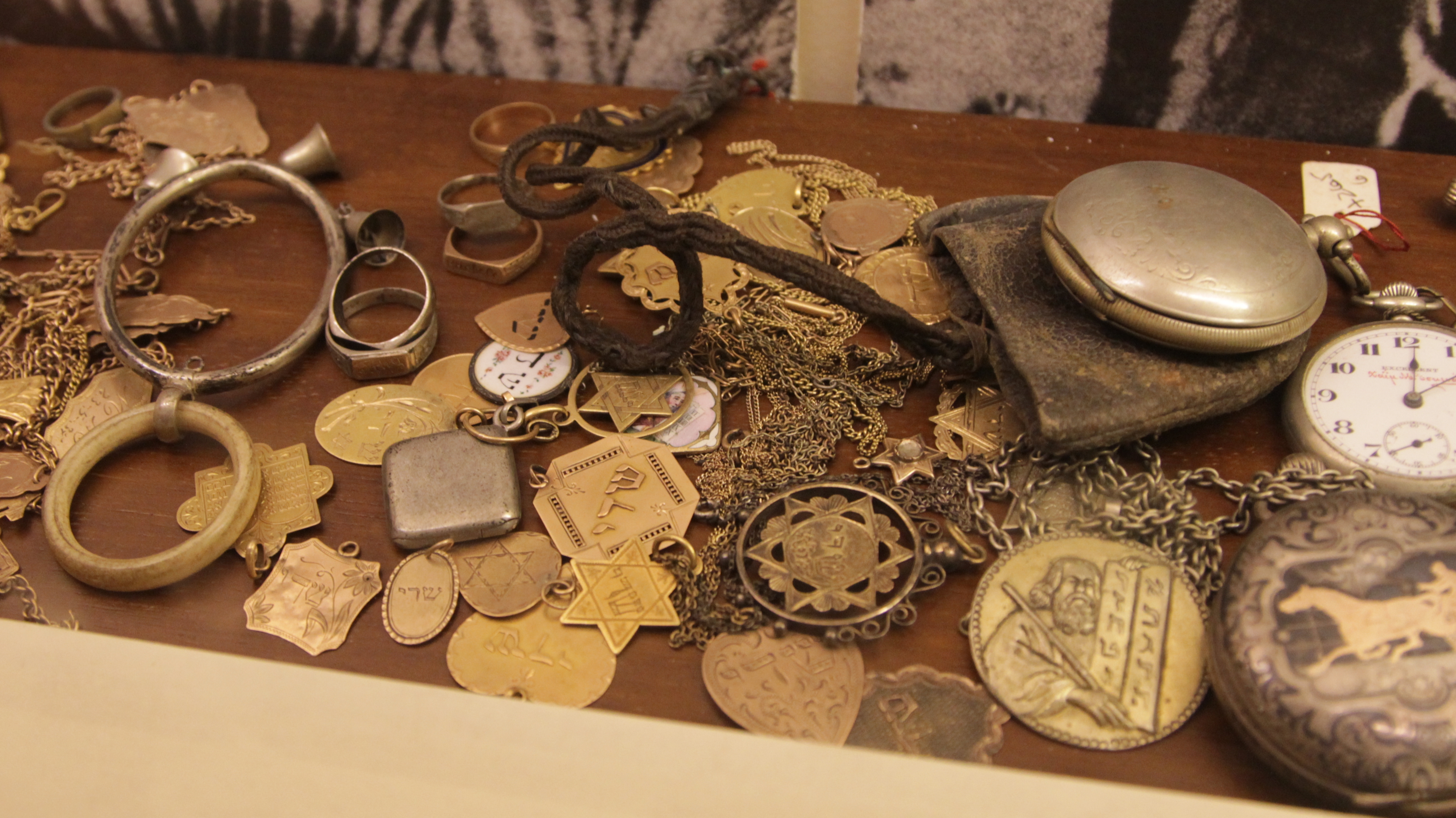 The Tillerson State Department’s statement last week that it will “return” to the Iraqi government the thousands of Jewish holy and secular objects, representing thousands of years of Iraqi-Jewish culture, that the Iraqi government stole from the persecuted, dispossessed Iraqi-Jewish community, makes the Tillerson State Department complicit in Iraq’s theft of Jewish property. (See “Despite Protests, State Department Says It Will Return Trove of Jewish Artifacts to Iraq,” by Josefin Dolsten, JTA, Sept. 8, 2017.) As a November 13, 2013 bipartisan Congressional letter to former Secretary of State John Kerry from Congresswoman Ileana Ros-Lehtinen (R-FL) and former Congressman Steve Israel (D-N.Y.) and 47 fellow Congress-members stated: “The Government of Iraq has no legitimate claim to these artifacts. . . . It would be criminal for the U.S. government to be complicit in denying the Jewish community what is rightfully theirs.”

ZOA urges Tillerson and the State Department to immediately reverse their immoral decision, and to return these Iraqi Jewish artifacts to their rightful Jewish owners: Iraqi Jewish families and their descendants, and the Iraqi Jewish community in America and Israel and elsewhere outside of Iraq.

ZOA urges Tillerson and the State Department to immediately reverse their immoral decision, and to return these Iraqi Jewish artifacts to their rightful Jewish owners: Iraqi Jewish families and their descendants, and the Iraqi Jewish community in America and Israel and elsewhere outside of Iraq. (Due to Iraq’s persecution, expulsions, hangings and other torments meted out against the 150,000 Jews who lived in Iraq in 1948, less than 10 Jews remain in Iraq today.) These stolen Jewish artifacts include Torahs, Haggadahs, ancient texts, manuscripts, school records, personal photographs, and Jewish community and family records. (See “Who Owns the Jewish Treasures that Were Hidden in Saddam Hussein’s Basement?,” by Sandi Fox, PBS News Hour, Apr. 29, 2014.)

If these items are sent to Iraq, Jewish Iraqis will not be able to even access their own precious property and records. The U.S. State Department warns all U.S. citizens against travel to Iraq. (U.S. State Dept. Iraq Travel Warning, June 14, 2017.) Pro-Israel Jews face even more mortal danger in Iraq. The U.S. State Department Iraq report notes: “Iraq’s criminal code 201 stipulates that any person promoting Zionist principles, or who associates himself with Zionist organizations or assists them by giving material or moral support, or works in any way towards the realization of Zionist objectives, is subject to punishment by death.”

There is also no guarantee that Iraq would preserve and protect these Jewish items.

Jews lived in Iraq for over 2,700 years, since 722 B.C.E., and contributed enormously to Iraqi society and culture: for instance nearly all of Baghdad’s symphony was Jewish prior to the 1948 expulsions.  Some of the world’s most prominent Jewish scholars produced the Babylonian Talmud in Iraq between 500 and 700 C.E.  Sadly, Iraq’s Muslims horribly persecuted the Iraqi Jewish community. Hitler collaborator Haj Amin al Husseini (the Palestinian Arab leader who also incited murderous anti-Jewish pogroms in Jerusalem, Sefat and Hebron during the 1920s and 1930s) inspired the infamous Farhud pogrom against Baghdad’s Jews in 1941: Iraqi mobs (with the complicity of the Iraqi police and government) murdered 180 Jews and wounded almost 1,000 Jews in just two days, during the Jewish holiday of Shavuot. As Jerusalem Post senior editor Caroline Glick notes, the Farhud pogrom was the Arab world’s Kristallnacht.  More persecution of Iraqi Jews (and Jews throughout other Muslim nations) followed, forcing the Iraqi Jewish community to flee for their lives and leave their billions of dollars of lands and possessions behind – including the important cultural artifacts that the State Department would once again deny to their rightful Jewish owners. (See, e.g., Jews in Islamic Countries: Iraq, Jewish Virtual Library; and Caroline Glick’s video about the Persecutions of the Iraqi Jewish Community and the Iraqi Jewish artifacts, Sept. 12, 2017.)

The bi-partisan Congressional letter briefly quoted above eloquently describes the history of the Iraqi Jewish artifacts and why they must be returned to Iraqi-Jewish families and the Iraqi-Jewish community, as follows:

The Jewish community in Iraq has roots that date back thousands of years.  Once the epicenter of Jewish cultural, religious and scholastic life, Baghdad is now estimated to have a Jewish population in the single digits. As the rise of the Nazis began in Germany, a rampant hatred for Jews became more prevalent in Iraq.  The Iraqi Jewish community faced increasing harassment, persecution, and pogroms that left hundreds dead, eventually forcing the majority to flee the anti-Semitic policies of the Iraqi government.

When the Jewish people were forced to uproot their centuries-old community, they left behind their sacred treasures in the last remaining Jewish temple in Baghdad for safe keeping. Then in the 1980s, Saddam Hussein ordered his men to confiscate almost all of their possessions.  Many communal, religious, and even personal items ended up warehoused in the basement of the Mukhabarat secret police headquarters, with no regard paid to their condition. Ancient texts, letters, books, and even personal photos were left to slowly disintegrate. It was not until U.S. and coalition forces entered Baghdad in 2003 that this cultural treasure trove was rediscovered. This set in motion a rescue operation that would eventually lead to these items finally being cared for in a professional and respectful manner here in the United States.

The State Department, along with the National Archives, has worked diligently to preserve these artifacts and to allow the public to get a glimpse of the rich life that was once the Iraqi Jewish community. However, we understand that the United States Government agreed with the Government of Iraq to send these looted items back to Iraq rather than to the Iraqi Jews, to whom they rightfully belong.

The Government of Iraq has no legitimate claim to these artifacts. We firmly believe that that these items should be returned to the descendants of the Iraqi Jewish community, who still mourn the loss of these priceless reminders of their former lives in Iraq.  Therefore we urge the Department of State to facilitate the return of these items to their rightful owners or their descendants, and not to the Government of Iraq. We are committed to ensuring justice for the Iraqi Jewish community and their descendants and to seeing that these important artifacts that were confiscated from them are rightfully returned to their community.

Signed by the following bipartisan Members of Congress (most of whom are still in Congress today):

We would love to hear from you! Please fill out this form and we will get in touch with you shortly.
Trending Z
News September 14, 2017
ZOA Deplores that Pres. Trump Dined with Jew-Haters Kanye West & Nick Fuentes, and Demands he Condemn Them
Uncategorized September 14, 2017
ZOA Honors Trump With Rarely Given Herzl Award for His Great Pro-Israel Work – Joins Ranks of Balfour, Truman, Begin, Meir, Ben-Gurion
News September 14, 2017
ZOA Responds to Questions About Pres. Trump, Kanye West, Fuentes, etc. Issue
Uncategorized September 14, 2017
Zionist Organization of America Honors Donald Trump for Support for Israel, Jewish Community
Center for Law & Justice
We work to educate the American public and Congress about legal issues in order to advance the interests of Israel and the Jewish people.
We assist American victims of terrorism in vindicating their rights under the law, and seek to hold terrorists and sponsors of terrorism accountable for their actions.
We fight anti-Semitism and anti-Israel bias in the media and on college campuses.
We strive to enforce existing law and also to create new law in order to safeguard the rights of the Jewish people in the United States and Israel.
Our Mission
ZOA STATEMENT
The ZOA speaks out for Israel – in reports, newsletters, and other publications. In speeches in synagogues, churches, and community events, in high schools and colleges from coast to coast. In e-mail action alerts. In op-eds and letters to the editor. In radio and television appearances by ZOA leaders. Always on the front lines of pro-Israel activism, ZOA has made its mark.
Related Articles
OP-ED BY: ZOA Staff J Street Poll Shows 72% of American Jews Support Building in Judea/Samaria