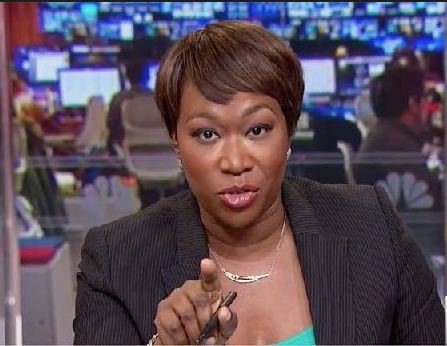 The Zionist Organization of America (ZOA) has called upon the TV broadcasting network MSNBC to fire Joy Reid, host of ‘MSNBC’s AM Joy’ program, for uttering outrageous anti-Semitic comments and for espousing bizarre conspiracy theories. The ZOA is appalled that someone espousing her views and making the comments she has made on air has a paid slot on a major TV network and calls upon MSNBC to fire her forthwith.

Reid has called Israel’s efforts to stop Hamas’s rocket attacks from Gaza and the Palestinian Arab deaths resulting from Hamas embedding their terrorists and rocket launchers amid the Gaza population as amounting to a killing of a “population equivalent of 100 9/11’s,” while actually remaining silent on the rocket assaults Israel was working to stop and defend its population against.

ZOA National President Morton A. Klein said, “It is truly remarkable and a sign of the sickness of our times that someone who espouses sinister anti-Semitic canards and gives voice to bizarre conspiracy theories hold a major broadcasting position on a TV network. More outrageous still is the fact that Joy Reid’s outrageous record, once discovered and publicized, has not led to her immediate firing, which the ZOA urges MSNBC to do without a moment’s delay.

We would love to hear from you! Please fill out this form and we will get in touch with you shortly.
Trending Z
Uncategorized June 11, 2018
ZOA Analysis: Most American Rabbis Who Are Boycotting Some Israeli Ministers Are From Extremist Left Wing Groups (J Street; T’ruah; JVP)
Uncategorized June 11, 2018
ZOA: Israel’s Reasonable Judicial Reform Proposals Are Good for Democracy, the Rule of Law and the Economy
Uncategorized June 11, 2018
Israel’s “Right of Return” Grandparent Clause is De-Judaizing the Jewish State – Eliminate It
News June 11, 2018
ZOA is Disappointed, Offended and Frightened by 211 U.S. House Votes Supporting Jew-Hating, Israel-Hating Rep. Ilhan Omar
Center for Law & Justice
We work to educate the American public and Congress about legal issues in order to advance the interests of Israel and the Jewish people.
We assist American victims of terrorism in vindicating their rights under the law, and seek to hold terrorists and sponsors of terrorism accountable for their actions.
We fight anti-Semitism and anti-Israel bias in the media and on college campuses.
We strive to enforce existing law and also to create new law in order to safeguard the rights of the Jewish people in the United States and Israel.
Our Mission
ZOA STATEMENT
The ZOA speaks out for Israel – in reports, newsletters, and other publications. In speeches in synagogues, churches, and community events, in high schools and colleges from coast to coast. In e-mail action alerts. In op-eds and letters to the editor. In radio and television appearances by ZOA leaders. Always on the front lines of pro-Israel activism, ZOA has made its mark.
Related Articles
OP-ED ZOA: Why Are We Funding a PA Terror Regime Which Is Also A Police State?