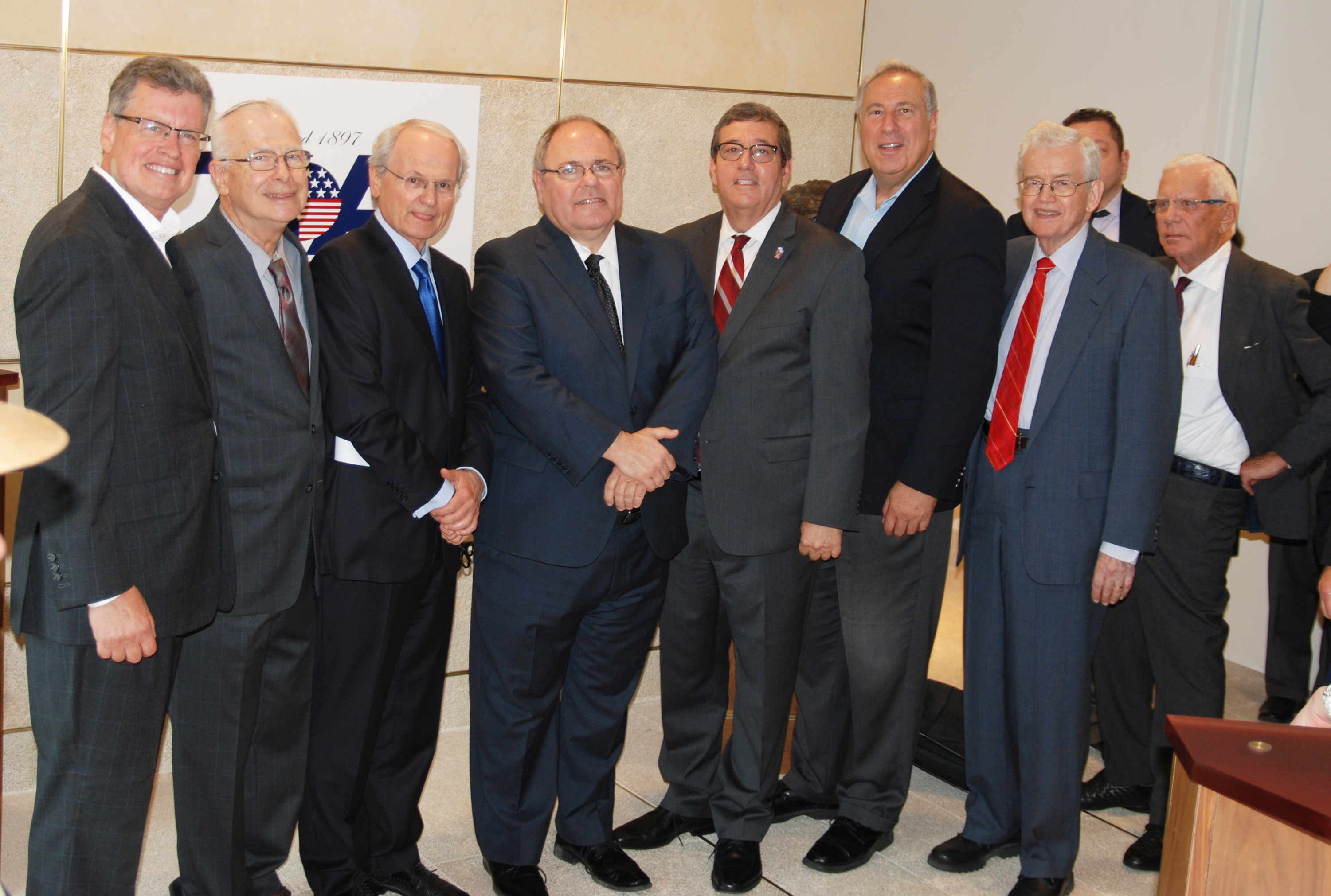 The Zionist Organization of America (ZOA) National Board has announced its new officers at its board installation in ZOA’s new offices last week at which over 100 people including Board Members, friends, family, and donors attended. All joined in a beautiful singing of Hatikvah.

Mark Levenson, Esq. is the new Chair of the Board, succeeding Dr. Michael Goldblatt. Mr. Levenson is Chair of the Real Estate Department at the New Jersey/New York law firm of Sills Cummis & Gross. He is a member of the Firm’s Management Committee. He has done extensive international work for clients in Israel, United Kingdom, India, Czech Republic, Eastern Europe, Latin America and France. He has served as an arbitrator for the NYC Civil Court system. He is a Fellow in the American College of Real Estate Lawyers. Mr. Levenson is the longstanding Chair of the New Jersey Israel Commission and immediate Past President of the New Jersey State Association of Jewish Federations.  He has held a variety of leadership positions in many non-profits—serving in the role of  Chair, President or an Executive Committee member—and has received numerous awards for his volunteer activities and has done significant professional and pro-bono work for various non-profits including The Joseph Kushner Hebrew Academy, the Jewish Federation of Clifton/Passaic, A Better Chance and the ZOA. Mr. Levenson played a critical leadership role in the drafting and enactment of New Jersey’s anti-BDS legislation. He is an honors graduate of Brandeis University and received his law degree from the New York University (NYU) School of Law.

Mark Levenson, Esq. is the new Chair of the Board…. He is Chairman of the New Jersey Israel Commission, and is immediate Past President of the New Jersey State Association of Jewish Federations…. He played a critical leadership role in the drafting and enactment of New Jersey’s anti-BDS legislation.

The Vice Chairs of ZOA are Dr. Alan Mazurek, a distinguished neurologist and Clinical Professor at Mount Sinai Medical School and long time pro-Israel activist, and Dr. Michael Goldblatt, a highly regarded clinical psychologist and professor at Temple Medical School and other medical schools, whose extraordinary work for the Jewish people began in his tireless fight to free the Jews of the Soviet Union.

The Treasurer is Mr. Henry Schwartz, a legendary businessman and philanthropist who is the CEO of Elmhurst Dairy, one of the largest dairy corporations in the country. Mr. Schwartz serves on other pro-Israel group boards and has also worked diligently to protect the security of America and Israel.

The Deputy Treasurer is Mr. Bart Blatstein, head of the Real Estate giant, the Tower group in Philadelphia, who has major property holdings throughout Philadelphia and Atlantic City, including the famed Showboat Hotel there which is located between the new Hard Rock Cafe Hotel and Casino and the new Ocean Resort Hotel and Casino. He is also on the Board of Temple University. He has served on the Board of the ADL and has been active in pro-Israel causes for decades.

The new Secretary is Mr. Jim Pollack, of Chicago, Minnesota and Bal Harbour, Florida. Mr. Pollack is a distinguished businessman who has served as Financial Director for a presidential candidate and served on the Executive Committee of AIPAC and many other pro-Israel groups.

The ZOA Executive Vice President is Mr. John Rosen, who was formerly a Regional Director for the American Jewish Committee and held posts in Jewish Federations in Boston, Nashville, TN and New Jersey.

Speaking at the invocation held in the beautiful new offices of ZOA in a high rise in Midtown Manhattan (overlooking the Empire State Building, the Chrysler Building and the East River next to the United Nations) were Cong. Michele Bachmann, a former presidential candidate and leading Evangelical Christian Zionist; Israeli Consul General to New York and surrounding areas, Amb. Dani Dayan; and Dr. Ran Baratz, a senior advisor to Israeli PM Benjamin Netanyahu. The ribbon cutting ceremony was performed in ZOA’s lobby between two beautiful busts of physicist and Zionist Albert Einstein and former president of ZOA Supreme Court Justice Louis Brandeis.

The ceremony of affixing a new Mezuzah on ZOA’s entranceway were performed by Board Members Michael Orbach, Dr. Stanley Benzel and Dr. Judy Rosen. Mr. Henry Schwartz led in the blessing over the champagne.

Dr. Michael Goldblatt welcomed the gathering and introduced the new Chair and spoke about the history of ZOA. National president Morton A. Klein spoke about the dramatic growth and change at ZOA over the last 25 years, including the establishment of a large national Campus Activism Program headed by Leore Ben David; a Center for Law and Justice headed by Susan Tuchman, Esq.; a Government Relations Division in Washington D.C. headed by Dan Pollak and Josh London; an activist millennial program called ZOA’s Fuel For Truth headed by Justin Ellis; the new Director of National Outreach and Engagement, Talya Messeri; the new Director of Special Projects, Elizabeth Berney, Esq.; a ZOA Report Magazine, an annual Mission to Washington and the very active publishing of opeds and letters in major secular and Jewish outlets in addition to appearances on TV, radio, and at campuses, synagogues, churches, and elsewhere, and the initiation of several ZOA sponsored student trips a year to Israel. Special appreciation was given to Dr. Miriam and Sheldon Adelson, Mr. Bernie Marcus, Mr. Ira Rennert, Mr. Myron Zimmerman, the Milken Family Foundation, Dr. Bob Shillman, and Dr. Irving and Cherna Moskowitz and to many others for helping to make ZOA’s phenomenal growth, increased influence and increasing ability to help Israel and the Jewish people possible.

We would love to hear from you! Please fill out this form and we will get in touch with you shortly.
Trending Z
News July 10, 2018
ZOA Condemns U.S. State Dept. & U.S. Amb. Nides For Siding with Antisemitic, Discriminatory Palestinian & Hamas Terrorists re: the Temple Mount, Violating Jews’ Religious Freedom
News July 10, 2018
ZOA’s Klein JPost Op-Ed: There is Nothing Extreme About Israel’s New Government
Uncategorized July 10, 2018
FLASH: ISRAEL-JORDAN PEACE TREATY (1994) GUARANTEES JEWS ACCESS TO THE TEMPLE MOUNT – LET MY PEOPLE PRAY
Uncategorized July 10, 2018
ZOA Analysis: Most American Rabbis Who Are Boycotting Some Israeli Ministers Are From Extremist Left Wing Groups (J Street; T’ruah; JVP)
Center for Law & Justice
We work to educate the American public and Congress about legal issues in order to advance the interests of Israel and the Jewish people.
We assist American victims of terrorism in vindicating their rights under the law, and seek to hold terrorists and sponsors of terrorism accountable for their actions.
We fight anti-Semitism and anti-Israel bias in the media and on college campuses.
We strive to enforce existing law and also to create new law in order to safeguard the rights of the Jewish people in the United States and Israel.
Our Mission
ZOA STATEMENT
The ZOA speaks out for Israel – in reports, newsletters, and other publications. In speeches in synagogues, churches, and community events, in high schools and colleges from coast to coast. In e-mail action alerts. In op-eds and letters to the editor. In radio and television appearances by ZOA leaders. Always on the front lines of pro-Israel activism, ZOA has made its mark.
Related Articles
OP-ED ZOA Mourns the Passing of Mayor Ed Koch