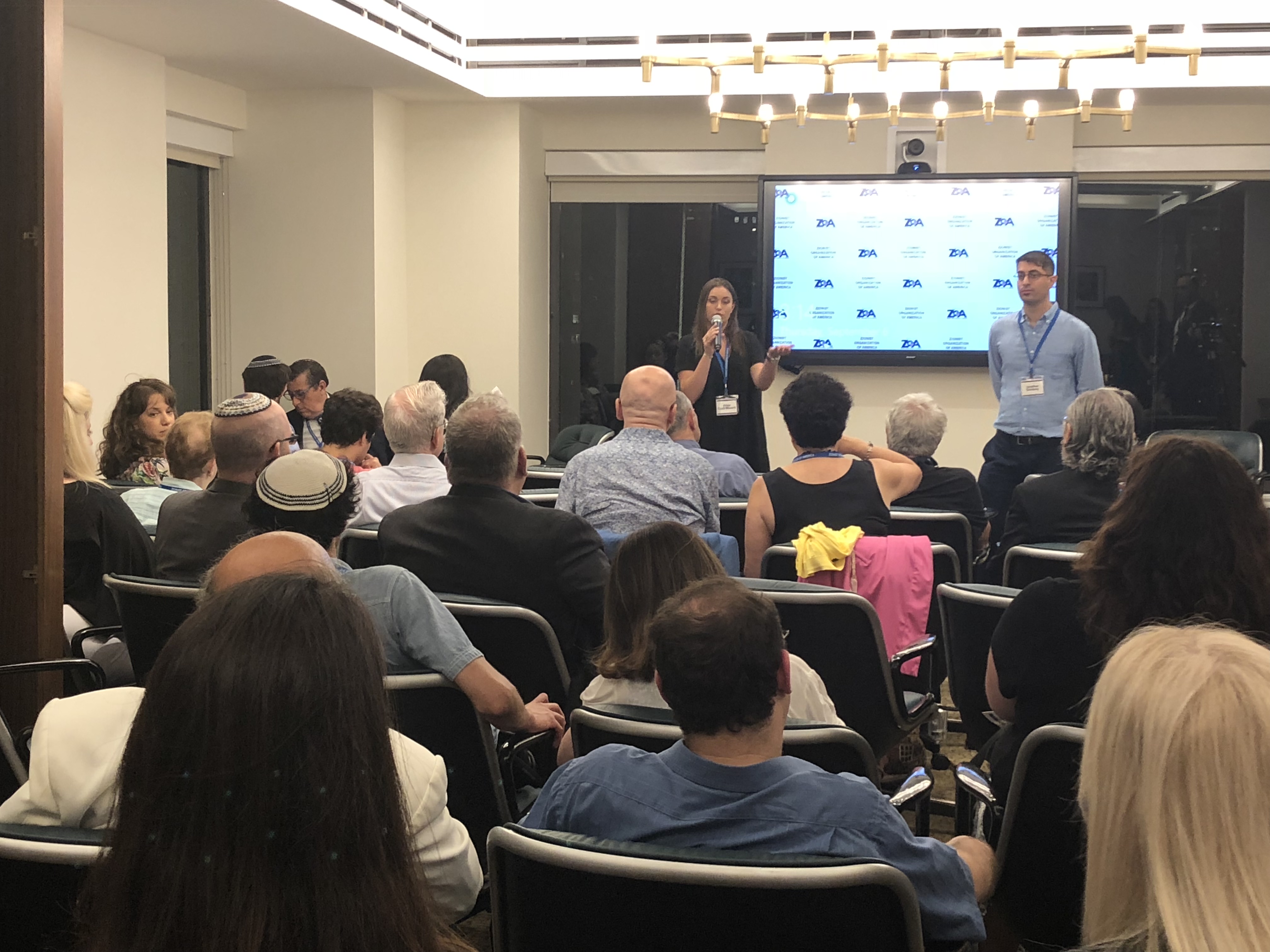 The energy in the room was palpable at the Zionist Organization of America NY Metro’s kickoff event on September 6th, a program entitled Jewish Students Under Siege: At A Campus Near You! ZOA Chooses Fight Not Flight. Led by the ZOA NY Metro Team, and ZOA Campus’ Associate Director and New England Campus Coordinator Jonathan Ginsburg, this introductory event brought in almost 50 attendees.

Throughout the country, the enemies of Israel are promoting and funding BDS (boycott, divestment, sanctions) and groups such as SJP (so-called Students for Justice in Palestine), and are encouraging anti-Semitism. It knows no bounds, as professors and administrators have either encouraged or tolerated this as well. Infringement upon pro-Israel free speech, staged die-ins and physical threats to Zionist students are common tactics.  This was made clear when we heard from two courageous young women.

Adela Cojab Moadeb, ZOA Campus Activist at NYU and a Jewish Week 2018 36 Under 36 Most Influential Jews, and Hendel Seif, ZOA Campus Fellow at CCNY, spoke about their experiences on their respective campuses, battling students and administration, and how ZOA provided the necessary resources, factual evidence, legal assistance and constant presence in order to help them feel supported and to safeguard their religious and personal freedoms.

We are witnessing the vitriol of hate speech and bullying on college campuses across the country, and it is imperative to be proactive in responding with an agenda for religious expression and freedom of speech.  From professors through the counseling student bodies, students have been met with anti-Zionist and anti-Semitic rhetoric and harassment at unprecedented levels in this country.  ZOA is proud to stand alongside and work with pro-Israel students!  ZOA Campus and our Center for Law and Justice mentor and empower students on the front lines, in the media, and if necessary in the courts.  ZOA will always stand strong and advocate unabashedly for Israel and students’ rights to express their Zionism.

In addition to hearing about ZOA’s indispensable role on college campuses, ZOA introduced a new engagement structure focused on donor appreciation efforts.  Details of the benefits and exclusive programming will be available shortly.

Eastern, Central and Western Europe, 2018:  70+ Years Post-Holocaust – is it safer to be a Jew and/or Zionist in Warsaw or in Paris?

We would love to hear from you! Please fill out this form and we will get in touch with you shortly.
Trending Z
News September 17, 2018
ZOA Condemns U.S. State Dept. & U.S. Amb. Nides For Siding with Antisemitic, Discriminatory Palestinian & Hamas Terrorists re: the Temple Mount, Violating Jews’ Religious Freedom
News September 17, 2018
ZOA’s Klein JPost Op-Ed: There is Nothing Extreme About Israel’s New Government
Uncategorized September 17, 2018
FLASH: ISRAEL-JORDAN PEACE TREATY (1994) GUARANTEES JEWS ACCESS TO THE TEMPLE MOUNT – LET MY PEOPLE PRAY
Uncategorized September 17, 2018
ZOA Analysis: Most American Rabbis Who Are Boycotting Some Israeli Ministers Are From Extremist Left Wing Groups (J Street; T’ruah; JVP)
Center for Law & Justice
We work to educate the American public and Congress about legal issues in order to advance the interests of Israel and the Jewish people.
We assist American victims of terrorism in vindicating their rights under the law, and seek to hold terrorists and sponsors of terrorism accountable for their actions.
We fight anti-Semitism and anti-Israel bias in the media and on college campuses.
We strive to enforce existing law and also to create new law in order to safeguard the rights of the Jewish people in the United States and Israel.
Our Mission
ZOA STATEMENT
The ZOA speaks out for Israel – in reports, newsletters, and other publications. In speeches in synagogues, churches, and community events, in high schools and colleges from coast to coast. In e-mail action alerts. In op-eds and letters to the editor. In radio and television appearances by ZOA leaders. Always on the front lines of pro-Israel activism, ZOA has made its mark.
Related Articles
OP-ED BY: ZOA Staff P.A.’s Abbas Confers Highest Award On Terrorist Leader Al-Wazir, Calling Him “Martyr,” “Model Of a True Fighter”