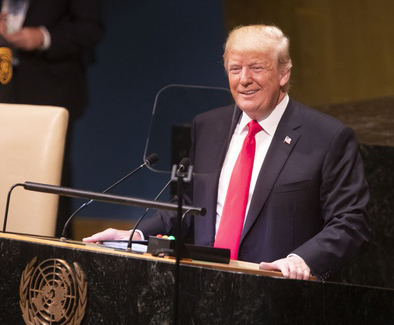 The ZOA strongly praises President Trump’s refreshingly honest superb speech at the United Nations yesterday.  The president pointed out that the Iranian Islamist regime “chants Death to America,” “threatens Israel with annihilation,” and “cannot allow them the means to deliver a nuclear warhead on any city on earth,” and that “Iran’s leaders plunder the nation’s resources to enrich themselves and to spread mayhem across the Middle East and far beyond.”  President Trump firmly called for all nations to isolate the Iranian regime as long as the regime’s aggression continues.  President Trump further eloquently described the need for sanctions on Iran, explaining:

The PA is clearly not a friend of America.  Notably, the Palestinian-Arab murderer of American-Israeli Ari Fuld – who was incited by the PA leadership Including dictator Abbas who called all Jews “filthy”– specifically targeted Americans to murder.  (“Witness Says Ari Fuld’s Killer Deliberately Targeted an American: Falafel shop worker tells Times of Israel that terrorist twice asked her and others in restaurant if they spoke English and stood behind Fuld for a full minute before stabbing him,” by Jacob Magid

“Iran’s neighbors have paid a heavy toll for the region’s [regime’s] agenda of aggression and expansion. That is why so many countries in the Middle East strongly supported my decision to withdraw the United States from the horrible 2015 Iran Nuclear Deal and re-impose nuclear sanctions.  The Iran deal was a windfall for Iran’s leaders. In the years since the deal was reached, Iran’s military budget grew nearly 40 percent. The dictatorship used the funds to build nuclear-capable missiles, increase internal repression, finance terrorism, and fund havoc and slaughter in Syria and Yemen.”  (“Remarks by President Trump to the 73rd Session of the United Nations General Assembly,” White House transcript, Sept. 25, 2018.)

ZOA further praises the president’s speech for affirming his administration’s continuing work with friends and allies to “deny radical Islamic terrorists any funding, territory or support, or any means of infiltrating our borders,” and careful parsing of foreign aid dollars. President Trump declared:

“The United States is the world’s largest giver by far, of foreign aid. But few give anything to us. That is why we are taking a hard look at U.S. foreign assistance. That will be headed up by Secretary of State Mike Pompeo. We will examine what is working, what is not working, and whether the countries who receive our dollars and our protection also have our interests at heart. Moving forward, we are only going to give foreign aid to those who respect us and, frankly, are our friends.”

The PA is clearly not a friend of America.  Notably, the Palestinian-Arab murderer of American-Israeli Ari Fuld – who was incited by the PA leadership Including dictator Abbas who called all Jews “filthy”– specifically targeted Americans to murder.  (“Witness Says Ari Fuld’s Killer Deliberately Targeted an American: Falafel shop worker tells Times of Israel that terrorist twice asked her and others in restaurant if they spoke English and stood behind Fuld for a full minute before stabbing him,” by Jacob Magid, Times of Israel, Sept. 21, 2018.)

ZOA is thus pleased that President Trump affirmed during his UN speech: “the United States took the only responsible course: We withdrew from the Human Rights Council, and we will not return until real reform is enacted.”

ZOA is also pleased that President Trump confirmed that “For similar reasons, the United States will provide no support in recognition to the International Criminal Court. As far as America is concerned, the ICC has no jurisdiction, no legitimacy, and no authority. The ICC claims near-universal jurisdiction over the citizens of every country, violating all principles of justice, fairness, and due process. We will never surrender America’s sovereignty to an unelected, unaccountable, global bureaucracy.”

It is significant and gratifying that President Trump will not countenance attempts to bring false charges, without due process protections, against the U.S. and Israel at the ICC.  (See “ZOA Praises Amb. Bolton (Adelson Award Recipient at Upcoming ZOA Gala) Condemning PLO/PA’s Attempts to Instigate Abusive, Baseless ICC Anti-Israel Investigation,” Sept. 12, 2018.)

ZOA also praises President Trump’s UN speech statements promoting energy independence.  Energy independence is critical to U.S. security.  Energy independent nations are also far less likely to be beholden to oil-rich Islamist regimes that seek to destroy Israel – the only democratic state in the Middle East.  We recall how, back in 1973, European nations were silent when then-Israeli Prime Minister Golda Meir’s asked why those nations refused to allow the refueling of U.S. planes, that were bringing desperately needed supplies to Israel during the Yom Kippur War.  A man said: “Of course they won’t talk. They can’t talk. Their throats are choked with oil.”  (“Their Throats Are Choked With Oil,” by Henry Oliner, May 4, 2012.)

It was also a pleasure to hear President Trump praise Israel among a “beautiful constellation of nations,” saying “There is Israel, proudly celebrating its 70th anniversary as a thriving democracy in the Holy Land” and “in recognition of every sovereign state to determine its own Capital. I moved the U.S. Embassy in Israel to Jerusalem.”

Thank you, President Trump, for a magnificent and refreshingly honest UN speech, and for all the outstanding policies that your speech affirmed.

We would love to hear from you! Please fill out this form and we will get in touch with you shortly.
Trending Z
Uncategorized September 26, 2018
FLASH: ISRAEL-JORDAN PEACE TREATY (1994) GUARANTEES JEWS ACCESS TO THE TEMPLE MOUNT – LET MY PEOPLE PRAY
Uncategorized September 26, 2018
ZOA Analysis: Most American Rabbis Who Are Boycotting Some Israeli Ministers Are From Extremist Left Wing Groups (J Street; T’ruah; JVP)
Uncategorized September 26, 2018
Israel’s “Right of Return” Grandparent Clause is De-Judaizing the Jewish State – Eliminate It
Uncategorized September 26, 2018
Exclusive: ZOA Accuses Ilhan Omar of Hating the U.S. ‘as Much as Israel,’ Lauds Kevin McCarthy for ‘Throwing Her Off the HFAC’
Center for Law & Justice
We work to educate the American public and Congress about legal issues in order to advance the interests of Israel and the Jewish people.
We assist American victims of terrorism in vindicating their rights under the law, and seek to hold terrorists and sponsors of terrorism accountable for their actions.
We fight anti-Semitism and anti-Israel bias in the media and on college campuses.
We strive to enforce existing law and also to create new law in order to safeguard the rights of the Jewish people in the United States and Israel.
Our Mission
ZOA STATEMENT
The ZOA speaks out for Israel – in reports, newsletters, and other publications. In speeches in synagogues, churches, and community events, in high schools and colleges from coast to coast. In e-mail action alerts. In op-eds and letters to the editor. In radio and television appearances by ZOA leaders. Always on the front lines of pro-Israel activism, ZOA has made its mark.
Related Articles
OP-ED ZOA Praises ADL, AJC Call For Further Review of Hagel’s Record – AIPAC & Others Silent