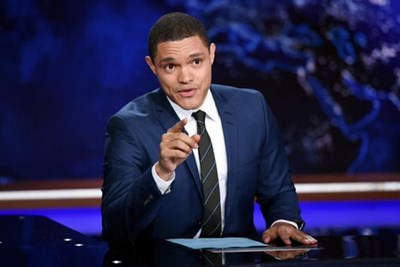 The ZOA urges the Anti-Defamation League (ADL) to cancel its plan to honor Trevor Noah as the headliner at the ADL’s upcoming “unity” event in Connecticut, due to Trevor Noah’s long history, continuing to the present time, of crude, antisemitic, anti-woman, hostile-to-Israel, intolerant, expletive-filled, vulgar, uncivil tweets and statements.  Ironically, ADL is advertising the event as a “gathering designed to bring people together, foster dialogue and build mutual respect.”  Noah’s crude, antisemitic, misogynistic, intolerant, mean-spirited statements and promotion of public incivility render Trevor Noah unfit to headline an ADL event or any event. ADL, whose stated mission is to fight antisemitism and bigotry, should never give a podium to Noah.  Such a podium legitimizes, mainstreams and gives credence to Trevor Noah’s hateful rhetoric.

Jewish organizations objected to Trevor Noah’s appointment as the Daily Show’s host in 2015, due to Noah’s antisemitic and other offensive statements.  For instance, B’nai B’rith International stated: “Trevor Noah, tapped to replace retiring Daily Show host Jon Stewart, has repeatedly tweeted comments that are deeply offensive and highly stereotypical, and his anti-Israel comments even border on incitement.  Why does he tweet about Jews so much?”

Some of Trevor Noah’s infamous antisemitic, anti-Israel and anti-women tweets include:

“South Africans know how to recycle like Israel knows how to be peaceful.”

“Behind every successful Rap Billionaire is a double as rich Jewish man,”

“A hot white woman with ass is like a unicorn. Even if you do see one, you’ll probably never get to ride it.”

ADL downplayed Trevor Noah’s statements in 2015, and was willing to give Trevor a chance to do better going forward from then on.  Yet former ADL head Abe Foxman still acknowledged:  “No doubt the comments [Noah Trevor] made on Twitter were inexcusable. There is no reasonable excuse for a comedian who tweets that, “Behind every successful Rap Billionaire is a double as rich Jewish man,” for cheap laughs. Regardless of the intent, the message plays into anti-Semitic notions of Jews and money and reinforces the notion that greedy Jews control the entertainment industry and take advantage of others for monetary gain.”

Oct. 2, 2018 video accompanying the above tweet: “And then [a drunk Trump is] like, ‘After studying the geopolitical situation in the Middle East, it’s clear to see that brute force is not adequate in suppressing Wahabism.’”  [Implication that the U.S. and/or Israel are suppressing Islam by brute force]

Sept. 6, 2018 video of his show, (Noah also tweeted the video): “Some people are worried that Kavanaugh may have made a deal with Trump’s personal lawyer, Mark Kasowitz. . . . As Trump would put it, you scratch my back, I’ll grab your pussy.”

August 10, 2018 video: Trevor Noah’s tribute to Aretha Franklin, praised her by praising Franklin’s support for Angela Davis, saying: “She was one of the first people who supported Angela Davis, you know from the Black Panthers.”

In her Black Panther days, Angela Davis purchased the weapons used in a courtroom hostage-taking incident that resulted in the deaths of a judge and others.  In recent years, Davis has been and continues to be a leading demonizer of Israel and promoter of the anti-Israel BDS (boycotts, divestment and sanctions) movement.

Trevor Noah’s comment about Aretha Franklin also included cursing:  “She only performed when she had her money in cash before the gig.  She was the original bitch about I better have my money.”

June 26, 2018 tweet: “Isn’t it Interesting [sic] how calls for civility tend to come from those in a position of privilege?”

June 26, 2018 video accompanying the above tweet, after Sarah Huckabee Sanders was forced to leave a restaurant:  “Do officials have right to be left alone when they’re off the clock?  Sarah Huckabee Sanders, mother of lies [accompanying picture shows Sanders’ face on a woman on the floor, next to a monster that it is implied she had given birth to].  Whatever happened to tolerance?  [The previous line was said in a mimic-y voice.] Tolerance got grabbed by the pussy, didn’t you hear?  It’s funny how these people are saying that administration officials shouldn’t be protested in their off hours, as if the administration’s policies only work from 9 to 5. . . Night dentist is the job that Steven Miller looks like he should have. . . . That restaurant owner didn’t ask Sarah Huckabee Sanders to leave because of her opinions. . . . She’s a senior official of the Trump administration . . . This person was protesting the government. . . . Some sh-t is going down. . . . Basically, people in power would like to be insulated from the effects of their actions. . . . Calls for civility always tend to come from people in a position of privilege.. . . Governments around the world called Mandela a terrorist. . . . Back when Martin Luther King was marching, people were complaining about him, the same way people are complaining about these protesters right now. . . . What happened to Sarah Huckabee Sanders isn’t nice, but as a government official, people protesting your policies is part of the job.”

Would Trevor Noah be advocating this if Barack Obama Administration officials were being hounded and forced out of restaurants by those opposing Obama’s policies?

June 25, 2018 video: “A Virginia restaurant tossed Sarah Huckabee Sanders out. . . Asking Sanders to leave was probably the nicest thing they could have done.  The waiter was probably, like, ‘Listen, if I’m being honest, all the chefs are jizzing [sic] in your food right now.  So if I were you, I’d go get a pizza at one of those places where you can watch them make it.’ . . . I don’t think this was so bad for Sarah Huckabee Sanders. . . . [Discusses how Sanders could go to restaurants and get free food before getting thrown out, and then say:] ‘I’ve got cheese, bitches.’ [Noah then mimics Indian immigrant restaurant owner who throws Sanders out and also insists that she has to pay for her food.  Then he discusses Trump’s tweet about the restaurant and mimics]: ‘I wouldn’t eat there with Mike Pence’s dick.’ . . .”

“In Florida, leftwing protestors chased a state attorney general, Pam Bondy, from a screening of a Mister Rogers documentary.  The weirdest part of that is that Mr. Rogers joined in.  He was like: ‘Everyone deserves love and compassion.  Is that Pam Bondy?  Get the f—k out of here.’” [Shows picture of Mr. Rogers making the “f–k U” sign with his middle finger]

[Trevor Noah then plays the infamous Maxine Waters clip telling people to create a crowd and push back on Trump administration officials wherever you see them.]  “Damn!  I love how Maxine Waters has gone from formal impeachment requests to we need to jump the fool and his boys, wherever we see them, gas stations, anywhere, they’re gonna come correct, we’re gonna jump them and tell them how we feel.  I feel bad for Sarah Sanders and her people.  You know, some restaurants won’t serve them.  People on dating sites pre-judge them before even giving them a chance. And every time they step outside, they’re made to feel like they really don’t belong here.  It’s really horrible.But on the plus side, now the Trump administration understands how it feels to be a minority.”

Trevor Noah’s use of his Daily Show platform to seemingly justify, and to gloat and laugh about incivility towards public officials is particularly dangerous at this time.  People have been seriously hurt.  In June 2017, a man attempted to murder congressmen while they were playing baseball.  Congressman Steven Scalise was shot, almost murdered and is still on crutches and suffering from serious lifelong injuries.  In November 2017, Congressman Rand Paul was physically attacked and injured. The attacker broke six of Paul’s ribs, and left Rand Paul with lung damage and multiple bouts of pneumonia.  Other officials are subjected to the same dangers.

Rand Paul’s wife – who must sleep with a gun by her side now – wrote an open letter to Cory Booker yesterday describing the attack last November and also explaining:  “In the last 18 months, our family has experienced violence and threats of violence at a horrifying level. . . . Earlier this week, Rand was besieged in the airport by activists “getting up in his face,” as you, Senator Booker, encouraged them to do a few months ago.  Preventing someone from moving forward, thrusting your middle finger in their face, screaming vitriol — is this the way to express concern or enact change?  Or does it only incite unstable people to violence, making them feel that assaulting a person is somehow politically justifiable?”  (“My Husband, Rand Paul, and Our Family Have Suffered Intimidation and Threats,” by Kelley Paul, CNN, Oct. 4, 2018.)

June 7, 2018 retweet of alligator head-butting a trapper story:  “That bald bitch got what he deserved.”

In other words, Trevor Noah is clearly not someone who should be headlining a unity event – or any event – of a Jewish or frankly any organization.  Dear Anti Defamation League (ADL) – Please don’t legitimize and give credibility to Trevor Noah, who promotes everything you’re against by relentlessly defaming, spewing antisemitism, hatred and intolerance with his vitriolic statements.

We would love to hear from you! Please fill out this form and we will get in touch with you shortly.
Trending Z
Uncategorized October 5, 2018
ZOA Analysis: Most American Rabbis Who Are Boycotting Some Israeli Ministers Are From Extremist Left Wing Groups (J Street; T’ruah; JVP)
Uncategorized October 5, 2018
ZOA: Israel’s Reasonable Judicial Reform Proposals Are Good for Democracy, the Rule of Law and the Economy
Uncategorized October 5, 2018
Israel’s “Right of Return” Grandparent Clause is De-Judaizing the Jewish State – Eliminate It
News October 5, 2018
ZOA is Disappointed, Offended and Frightened by 211 U.S. House Votes Supporting Jew-Hating, Israel-Hating Rep. Ilhan Omar
Center for Law & Justice
We work to educate the American public and Congress about legal issues in order to advance the interests of Israel and the Jewish people.
We assist American victims of terrorism in vindicating their rights under the law, and seek to hold terrorists and sponsors of terrorism accountable for their actions.
We fight anti-Semitism and anti-Israel bias in the media and on college campuses.
We strive to enforce existing law and also to create new law in order to safeguard the rights of the Jewish people in the United States and Israel.
Our Mission
ZOA STATEMENT
The ZOA speaks out for Israel – in reports, newsletters, and other publications. In speeches in synagogues, churches, and community events, in high schools and colleges from coast to coast. In e-mail action alerts. In op-eds and letters to the editor. In radio and television appearances by ZOA leaders. Always on the front lines of pro-Israel activism, ZOA has made its mark.
Related Articles
OP-ED BY: ZOA Staff ZOA Welcomes Release of Jonathan Pollard

The Zionist Organization of America (ZOA) today welcomed the release of Jonathan Pollard. Mr. Pollard is the only American citizen sentenced to life in prison for passing classified information to a US ally – in this case Israel. He has been behind bars since his arrest in 1985. After finally giving him official recognition as […]

OP-ED BY: ZOA Staff ZOA Retracts its 2011 Qualified Support of Daniel Shapiro to be US Ambassador to Israel

ZOA President Morton A. Klein released the following statement: We find Ambassador Shapiro’s statements at the Institute for National Security Studies to be false, hostile, and one sided against the United States most reliable ally, Israel which is surrounded by hostile Arab enemies, many devoted to its destruction. We also find Amb. Shapiro’s deafening silence […]