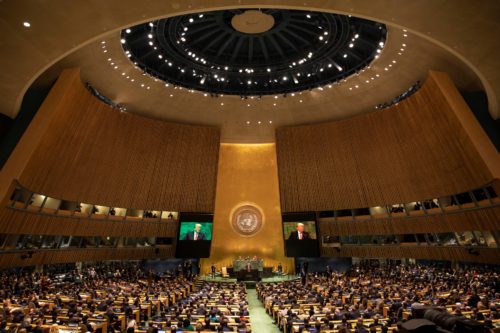 The Zionist Organization of America (ZOA) has condemned the failure of the United Nations to condemn the terrorist actions of Hamas, the Palestinian Arab terrorist organization that has not only murdered over 1,000 Israeli civilians in scores of suicide bombings and hundreds of other attacks, but also calls in its Covenant for the destruction of Israel (Article 15) and the global murder of Jews (Article 7).

“The fact that a clear two-thirds majority could not be mustered is a sign of the entrenched anti-Israel environment at the world body.” -Mort Klein

A recent US-sponsored resolution in the UN General Assembly (UNGA) mustered a clear majority in support of condemning the genocidally-inclined Hamas for “repeatedly firing rockets into Israel and for inciting violence, thereby putting civilians at risk” and for its use of resources in Gaza to construct military infrastructure “including tunnels to infiltrate Israel and equipment to launch rockets into civilian areas.

The majority vote was 87 in favor, 58 opposed and 32 abstentions, but a last-minute procedural change at the behest of Kuwait, added an additional requirement –– unique for an UNGA resolution –– of a two-thirds majority, which the resolution failed to obtain. Hamas and the other Palestinian Arab terrorist groups have interpreted the failure of the US-sponsored resolution as amounting to an internationally sanctioned license to continue killing Jews, with senior Hamas official Khalil al-Haya, describing the failure of the vote as a “big boost for the Palestinian resistance.”

In the words of Palestinian Arab scholar Bassam Tawil, “Besides the joy the terrorist groups have been expressing in recent days, they are now thanking and praising the countries that opposed the US resolution in particular, and the UN in general, for giving Palestinians a green light to continue the fight against Israel. In other words, Hamas is saying thank you to those countries that do not consider suicide bombings and rocket attacks as acts of terrorism … By failing to endorse the US-sponsored resolution, the UN has sent the following message to Palestinian terrorists: ‘You have nothing to worry about because the UN will not label you terrorists if you attack or kill Jews.’ This message has been fully absorbed by the terrorists in the Gaza Strip, who are now celebrating their “victory” at the UN …. Hours after the UN failed to endorse the resolution, the Hamas leadership announced that the ‘armed struggle’ against Israel will continue. The announcement came as Palestinians were also marking the 31st anniversary of the eruption of the First Intifada, also known as the ‘Rock Intifada.’ ‘The resistance is a legitimate right guaranteed by all international laws and conventions,’ Hamas said. ‘This includes the armed struggle, which constitutes a strategic choice for safeguarding the Palestinian cause and restoring Palestinian rights’” (Bassam Tawil, ‘UN Approves Terror, Torpedoes Peace,’ Gatestone Institute, December 10, 2018).

ZOA National President Morton A. Klein said, “The failure of the world’s nations to vote in the UNGA in sufficient numbers to condemn Hamas for its monstrous terrorist activities is a dismal and disgraceful failure.

“Even allowing for the remarkable and important fact that a clear majority of the world was prepared to back this, the first UNGA resolution seeking to condemn a terrorist group attacking Israel, the fact that a clear two-thirds majority could not be mustered is a sign of the entrenched anti-Israel environment at the world body.

“Indeed, immediately after this resolution had been voted on, the UNGA voted on yet another anti-Israel resolution which condemned Jewish communities in Judea/Samaria by a 156 – 5 vote, with only Israel, the United States, Australia, Liberia and the Marshall Islands voting against it.

“This should not prevent us from congratulating the Trump Administration, President Donald Trump and out-going UN Ambassador Nikki Haley for sponsoring the resolution and working for its passage. Even in failing, the US-sponsored resolution achieved a remarkable, clear majority in a body previously distinguished solely for passing biased anti-Israel resolutions with lop-sided majorities.

“This shows that a new US policy, resolutely adopted and pursued by Ambassador Haley towards the anti-Israel campaigning culture in the UN, rather than being accepted as a fact of life, can produce results, even if much work remains to be done.

“The Trump Administration deserve our thanks and recognition, even as the nations of the world deserve criticism for failing to support this resolution in sufficient numbers, including a number of US allies. The Trump Administration has said that it will pay close attention to how its allies vote and we trust it is doing so right now.”

We would love to hear from you! Please fill out this form and we will get in touch with you shortly.
Trending Z
News December 11, 2018
ZOA Condemns U.S. State Dept. & U.S. Amb. Nides For Siding with Antisemitic, Discriminatory Palestinian & Hamas Terrorists re: the Temple Mount, Violating Jews’ Religious Freedom
News December 11, 2018
ZOA’s Klein JPost Op-Ed: There is Nothing Extreme About Israel’s New Government
Uncategorized December 11, 2018
FLASH: ISRAEL-JORDAN PEACE TREATY (1994) GUARANTEES JEWS ACCESS TO THE TEMPLE MOUNT – LET MY PEOPLE PRAY
Uncategorized December 11, 2018
ZOA Analysis: Most American Rabbis Who Are Boycotting Some Israeli Ministers Are From Extremist Left Wing Groups (J Street; T’ruah; JVP)
Center for Law & Justice
We work to educate the American public and Congress about legal issues in order to advance the interests of Israel and the Jewish people.
We assist American victims of terrorism in vindicating their rights under the law, and seek to hold terrorists and sponsors of terrorism accountable for their actions.
We fight anti-Semitism and anti-Israel bias in the media and on college campuses.
We strive to enforce existing law and also to create new law in order to safeguard the rights of the Jewish people in the United States and Israel.
Our Mission
ZOA STATEMENT
The ZOA speaks out for Israel – in reports, newsletters, and other publications. In speeches in synagogues, churches, and community events, in high schools and colleges from coast to coast. In e-mail action alerts. In op-eds and letters to the editor. In radio and television appearances by ZOA leaders. Always on the front lines of pro-Israel activism, ZOA has made its mark.
Related Articles
OP-ED ZOA: Why Are We Funding a PA Terror Regime Which Is Also A Police State?