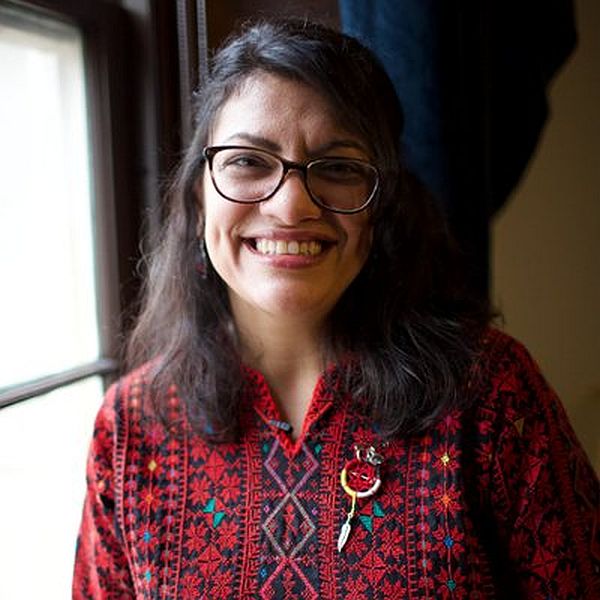 That didn’t take long. Rep. Rashida Tlaib (D-MI), newly elected to the U.S. Congress, has already posted a “correction” to the world map in her congressional office, marking Israel as “Palestine.” She has thus effectively indicated her support for the Palestinian Arab objective of eliminating the Jewish state of Israel on her first day in office.

Rep. Rashida Tlaib has already posted a “correction” to the world map in her congressional office, marking Israel as “Palestine.” She has thus effectively indicated her support for the Palestinian Arab objective of eliminating the Jewish state of Israel on her first day in office.

Tlaib has also already accused U.S. senators sponsoring a law against the BDS movement of looking out for the interests of Israel rather than those of America. Her comment is a bit ironic considering that she literally wore a Palestinian flag while pledging herself to the Palestinian Arab cause when she was sworn into office.

Present at her swearing-in, incidentally, was Linda Sarsour, a sharia-promoting, Jew-hating Islamist radical who denies for Jews the self-determination she demands for the terrorist dictatorship of Mahmoud Abbas. Sarsour has asserted that there is “nothing creepier than Zionism,” called the Palestinian Authority’s tactic of deploying children to throw rocks at IDF soldiers in combat situations the “definition of courage,” and seeks a single Arab-dominated state on the ruins of Israel.

In April 2017, Sarsour shared a platform with Palestinian terrorist Rasmeh Odeh, convicted for the murder of two Israelis in a 1969 terror attack, saying she was “honored” to be on the same stage as her. She has also unhesitatingly endorsed the Nation of Islam – led by the anti-Semitic, black supremacist hate-monger Louis Farrakhan – as “integral” to American Muslim life and even addressed a Farrakhan rally.

Rep. Tlaib has displayed her extreme anti-Israel, anti-Jewish animus before. Her record on Israel includes the following:

PA-controlled media, mosques, schools, and camps are suffused with the glorification of terrorism and incitement to hatred and murder as children are educated to aspire to murdering Jews as a national and religious duty. PA terrorism, meanwhile, has claimed the lives of U.S. citizens.

None of this, however, appears to bother Rep. Tlaib.

The truth is, there were no grounds to hope that Rashida Tlaib would abandon her extremist, anti-Israel views or her desire to see the elimination of the independent Jewish state of Israel. Her record of support for it is clear and unambiguous. It is nonetheless striking, though, that we didn’t need to wait even a day before her horrible extremism was on display – literally – on her office wall.

We would love to hear from you! Please fill out this form and we will get in touch with you shortly.
Trending Z
News January 21, 2019
ZOA Condemns U.S. State Dept. & U.S. Amb. Nides For Siding with Antisemitic, Discriminatory Palestinian & Hamas Terrorists re: the Temple Mount, Violating Jews’ Religious Freedom
News January 21, 2019
ZOA’s Klein JPost Op-Ed: There is Nothing Extreme About Israel’s New Government
Uncategorized January 21, 2019
FLASH: ISRAEL-JORDAN PEACE TREATY (1994) GUARANTEES JEWS ACCESS TO THE TEMPLE MOUNT – LET MY PEOPLE PRAY
Uncategorized January 21, 2019
ZOA Analysis: Most American Rabbis Who Are Boycotting Some Israeli Ministers Are From Extremist Left Wing Groups (J Street; T’ruah; JVP)
Center for Law & Justice
We work to educate the American public and Congress about legal issues in order to advance the interests of Israel and the Jewish people.
We assist American victims of terrorism in vindicating their rights under the law, and seek to hold terrorists and sponsors of terrorism accountable for their actions.
We fight anti-Semitism and anti-Israel bias in the media and on college campuses.
We strive to enforce existing law and also to create new law in order to safeguard the rights of the Jewish people in the United States and Israel.
Our Mission
ZOA STATEMENT
The ZOA speaks out for Israel – in reports, newsletters, and other publications. In speeches in synagogues, churches, and community events, in high schools and colleges from coast to coast. In e-mail action alerts. In op-eds and letters to the editor. In radio and television appearances by ZOA leaders. Always on the front lines of pro-Israel activism, ZOA has made its mark.
Related Articles
OP-ED BY: Morton A. Klein, ZOA Jerusalem is Holy to Jews, Not to Muslims