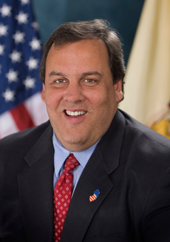 Last week, potential presidential candidate, Governor Chris Christie of New Jersey, spoke to hundreds of  Jews at the pro-Israel Republican Jewish Coalition meeting  at the Las Vegas’ Palazzo hotel. Surprisingly, Christie didn’t mention Israel in his prepared remarks but during the Q &A, he inaccurately referred to Judea and Samaria as “occupied territories.”  This is the language of those hostile to Israel, designed solely to delegitimize the Jewish state’s claims to that land. Gov. Christie later claimed that he “misspoke.”  But I don’t believe him.   Here’s why.

The audience noticeably gasped and murmurs quickly spread throughout the room when Christie used this term.   This audience understands that Israel captured this land from Jordan in a defensive war. More importantly, Jordan had no legal sovereignty there, but had illegally controlled this territory from 1948 to 1967, only being recognized by 2 countries.  And Jordan’s King Hussein publicly relinquished all claims to that territory in 1988. These activist Zionists know that Israel has a greater political, religious, legal, and historic right to that land than do the Palestinians.  For G-d’s sake, even the term Jew comes from the fact that we Jews come from Judea.

Having been in the room and as someone who has delivered many public speeches, the audience reaction was so pronounced that Gov. Christie should have realized he upset many in the room, giving him his first opportunity to say that he was wrong and misspoke.  But he didn’t.   Despite that , I still wanted to give him another opportunity to do so.

It’s important to note that I wanted to like Gov. Christie.   As the head of the Zionist Organization of America, I, like anyone – Republican or Democrat- who supports the Jewish State want to find reasons that important politicians also want to maintain and strengthen U.S. support for our most important ally.  When I approached Christie after his talk, I respectfully explained why he should use one of the more accurate terms – either “Judea and Samaria,”  “West Bank,” or “disputed territories.” Then I asked him if he would do so.  Christie responded brusquely and dismissively with a scowl and a non-answer.  “I saw you shaking your head,” he proclaimed.  I asked him again if he would use one of the more appropriate terms.  He again responded with the same non-answer refusing to say he misspoke saying, “Yeah, I saw you shaking your head in the first row when I used that term.” Now I was concerned and thoroughly frustrated.

It was only after I then spoke to the many journalists covering this event, which triggered over a hundred twitters and after Gov. Christie met with important donors Sheldon and Miriam Adelson that Christie stated that he “misspoke.”  What the Governor didn’t say is that he sincerely apologizes, or that he now understands Israel has a legitimate claim to this land, or that Jews have every right to live there.  And remember – he only said that he “misspoke” after speaking to a major donor whose support he was seeking.  He never said it to me who he didn’t know and whose support he was not seeking.  Clearly to non-donor Mort Klein he would likely express his true feelings while to donor Adelson he would more likely say whatever was necessary to gain his support.

It pains me to say that Gov. Christie either has a woeful lack of knowledge and understanding of the reality of the issues facing Israel or that he is simply hostile to the Jewish State and sympathetic to the Arabs.

After my encounter with Gov. Christie, several conference attendees told me to look into his record with respect to how he approaches radical Islam.  So I did.  And it’s not encouraging.

Christie shockingly kissed, embraced, and praised New Jersey radical  Iman Mohammed Qatanani-a man who  openly calls for  U.S. funding of Hamas, a U.S. designated terrorist group, whose charter calls for the murder of Jews and the destruction of Israel.  Qatanani has also proclaimed “On the 15th of May, 1948 was the greatest disaster which occurred on the face of the earth…the State of Israel was established on the land of Palestine.”  Christie even designated a top aide Assistant U.S. Attorney Charles McKenna to testify as a character witness for Qatanani. Furthermore, in his Vegas speech, Christie  mischaracterized the controversy over his appointing Sohail Mohammed as a judge to the New Jersey Superior Court as “Muslim Bigotry” then went on to profusely praise Mohammed. The truth is that people were concerned about the fact that he was general counsel for the American Muslim Union which has blamed Israeli commandos for the 9-11 terrorist attack and that Mohammed defended Palestinian Isamist  Jihadist Operative Sami Al Arian whose indictment Mohammed said was “nothing but  a witch hunt.”  As terrorism experts Dr. Daniel Pipes and Steven Emerson wrote “Mohammed is not only a lawyer for Islamists but is one of them.”

Christie also turned a blind eye to the deeply troubling record of the people who were trying to build the Ground Zero Mosque, deriding anyone concerned about their radical statements and questionable motives as “crazies.”  He blasted the New York Police Department’s surveillance of Muslim communities – which has been responsible for stopping multiple attempted terror attacks – as possibly “born out of arrogance, or out of paranoia, or out of both.”

All this and more is why Daniel Pipes and Steven Emerson wrote “time and again Christie has sided with Islamist forces against those safeguarding American security and civilization.”

I’m deeply troubled by Gov. Christie not just as a supporter of Israel, but as an American.

We would love to hear from you! Please fill out this form and we will get in touch with you shortly.
Trending Z
Uncategorized April 4, 2014
FLASH: ISRAEL-JORDAN PEACE TREATY (1994) GUARANTEES JEWS ACCESS TO THE TEMPLE MOUNT – LET MY PEOPLE PRAY
Uncategorized April 4, 2014
ZOA Analysis: Most American Rabbis Who Are Boycotting Some Israeli Ministers Are From Extremist Left Wing Groups (J Street; T’ruah; JVP)
Uncategorized April 4, 2014
Israel’s “Right of Return” Grandparent Clause is De-Judaizing the Jewish State – Eliminate It
Uncategorized April 4, 2014
Exclusive: ZOA Accuses Ilhan Omar of Hating the U.S. ‘as Much as Israel,’ Lauds Kevin McCarthy for ‘Throwing Her Off the HFAC’
Center for Law & Justice
We work to educate the American public and Congress about legal issues in order to advance the interests of Israel and the Jewish people.
We assist American victims of terrorism in vindicating their rights under the law, and seek to hold terrorists and sponsors of terrorism accountable for their actions.
We fight anti-Semitism and anti-Israel bias in the media and on college campuses.
We strive to enforce existing law and also to create new law in order to safeguard the rights of the Jewish people in the United States and Israel.
Our Mission
ZOA STATEMENT
The ZOA speaks out for Israel – in reports, newsletters, and other publications. In speeches in synagogues, churches, and community events, in high schools and colleges from coast to coast. In e-mail action alerts. In op-eds and letters to the editor. In radio and television appearances by ZOA leaders. Always on the front lines of pro-Israel activism, ZOA has made its mark.
Related Articles
OP-ED BY: By Morton A. Klein, ZOA National President Op-Ed: Seven Reasons Showing Obama Not Serious About Stopping Iran Nukes