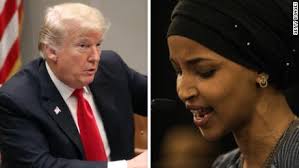 The Zionist Organization of America (ZOA) has applauded President Donald Trump’s call for Rep. Ihlan Omar (D–MN) to resign over anti-Semitic tweets. Rep. Omar, a freshman legislator voted into office in the 2018 midterm elections, has an astonishing and disturbing record of anti-Semitic and extreme anti-Israel words and deeds.

When running for Congress, Rep. Omar misled her constituents regarding her support for the Boycott, Divestment and Sanctions (BDS) campaign which, as admitted by its originators, seeks to delegitimize, economically harm and ultimately eliminate the Jewish State of Israel by criminalizing business relations with Israeli Jews. Once elected, Rep. Omar admitted to her support for BDS.

In a November 2012 tweet, Rep. Omar made a statement invoking time-honored anti-Semitic images of enormous and malign Jewish power, tweeting, “Israel has hypnotized the world, may Allah awaken the people and see the evil doings of Israel.” Rep. Omar purports to have apologized for this tweet’s anti-Semitic trope, but she neither withdrew her criticism of Israel nor, to this day, has she deleted this tweet.

In 2017, as a Minnesota state legislator, Omar was one of only two legislators who voted against a bill aimed at denying life insurance payments to any person convicted of aiding or committing terror acts. And in a May 2018 tweet, she labelled Israel an “apartheid … regime.”

Despite this vicious record, Rep. Omar, who has no previous experience of foreign affairs, was appointed to the House Foreign Relations Committee.

President Trump has said, “Anti-Semitism has no place in the United States Congress … I think she should either resign from Congress or she should certainly resign from the House Foreign Affairs Committee.”

ZOA National President Morton A. Klein said, “We applaud President Donald Trump’s call for Rep. Omar to resign and to be removed from the House Foreign Relations Committee, to which she was unwarrantedly appointed.”

ZOA National President Morton A. Klein said, “We applaud President Donald Trump’s call for Rep. Omar to resign and to be removed from the House Foreign Relations Committee, to which she was unwarrantedly appointed.

“There is no doubt that the her words cross the line into anti-Semitism as defined by the State Department’s definition of anti-Semitism.

“Rep Omar’s gutter criticism of Israel as an ‘apartheid regime,’ renders her clearly guilty, in the words of the State Department definition, of ‘denying the Jewish people their right to self-determination, e.g., by claiming that the existence of a State of Israel is a racist endeavor.’ Also, in viciously defaming legitimate Israeli defense of its citizens from Hamas rocket barrages, she is guilty of ‘applying double standards by requiring of [Israel] a behavior not expected or demanded of any other democratic nation.’

“We dare not tolerate anti-Semitism, especially at a time in which there has been a frightening and disturbing rise in anti-Semitic activity and hate crimes across the world, including in the United States. President Trump is right to call out an egregious case of anti-Semitism and to call for the resignation of the legislator responsible.”

We would love to hear from you! Please fill out this form and we will get in touch with you shortly.
Trending Z
News February 15, 2019
ZOA Condemns U.S. State Dept. & U.S. Amb. Nides For Siding with Antisemitic, Discriminatory Palestinian & Hamas Terrorists re: the Temple Mount, Violating Jews’ Religious Freedom
Uncategorized February 15, 2019
FLASH: ISRAEL-JORDAN PEACE TREATY (1994) GUARANTEES JEWS ACCESS TO THE TEMPLE MOUNT – LET MY PEOPLE PRAY
Uncategorized February 15, 2019
ZOA Analysis: Most American Rabbis Who Are Boycotting Some Israeli Ministers Are From Extremist Left Wing Groups (J Street; T’ruah; JVP)
Uncategorized February 15, 2019
Israel’s “Right of Return” Grandparent Clause is De-Judaizing the Jewish State – Eliminate It
Center for Law & Justice
We work to educate the American public and Congress about legal issues in order to advance the interests of Israel and the Jewish people.
We assist American victims of terrorism in vindicating their rights under the law, and seek to hold terrorists and sponsors of terrorism accountable for their actions.
We fight anti-Semitism and anti-Israel bias in the media and on college campuses.
We strive to enforce existing law and also to create new law in order to safeguard the rights of the Jewish people in the United States and Israel.
Our Mission
ZOA STATEMENT
The ZOA speaks out for Israel – in reports, newsletters, and other publications. In speeches in synagogues, churches, and community events, in high schools and colleges from coast to coast. In e-mail action alerts. In op-eds and letters to the editor. In radio and television appearances by ZOA leaders. Always on the front lines of pro-Israel activism, ZOA has made its mark.
Related Articles
OP-ED ZOA Criticizes StandWithUs for Again Stating Falsehood That Israel Supports a Palestinian State When it Doesn’t

Zionist Organization of America (ZOA) President Morton A. Klein and ZOA Chair Mark Levenson, Esq. released the following statement: ZOA is compelled to again urge StandWithUs (SWU) to correct a serious falsehood, which they’ve now repeated on their website, in a suggested sample letter.  The StandWithUs letter falsely states that “Israel does not oppose the notion […]

The Zionist Organization of America (ZOA) commended Congress for passing the Anti-Terrorism Clarification Act of 2018 (ATC Act), and praised President Trump for signing it into law yesterday. The ZOA strongly advocated for this much-needed legislation, which will close loopholes in the Anti-Terrorism Act of 1992, and help American victims of terrorism abroad to hold […]