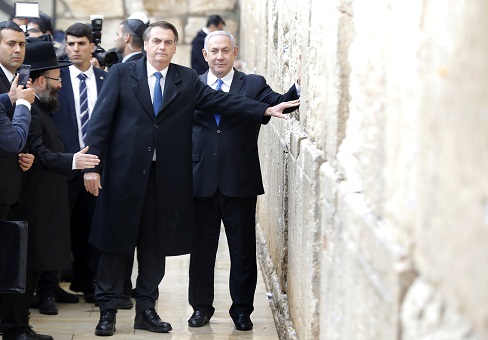 President Bolsonaro, prior to his election as president, promised to recognize Jerusalem as Israel’s capital and relocate the Brazilian Embassy from Tel Aviv to Jerusalem but has for the moment opted for the more modest move of opening a trade office in Jerusalem. The Brazil Foreign Ministry said that “Brazil decided to create an office in Jerusalem to promote trade, investment, technology and innovation as a part of its embassy in Israel,” while President Bolsonaro said at a joint press conference with Prime Minister Netanyahu that “the wedding [between our two countries that] we are celebrating today is going to bring many benefits to both our peoples” (Daniel Uria, ‘Brazil to open diplomatic office in Jerusalem,’ United Press International, March 31, 2019).

However, at the same time, Brazilian presidential spokesman Otavio Rego Barros said that, “There is no recognition of Jerusalem as the capital … Our president continues to evaluate this possibility (of moving the embassy), but that is not what we decided at this time.” Although Brazil noted that the new trade office is not a diplomatic office, the move was still harshly criticized by Mahmoud Abbas’ Palestinian Authority (PA), which was additionally angered by President Bolsonaro’s failure to visit the PA as well as to coordinate his visit with the PA (‘Brazilian President Visits Western Wall, Palestinians Angry Over Jerusalem Mission,’ The Algemeiner, April 1, 2019).

“We praise President Bolsonaro and his government for their decision to establish a trade office in Jerusalem and look forward to the day, which hopefully will come soon, that Brazil relocates its embassy Jerusalem as well.”

“Although we are disappointed that initial expectations of Brazil relocating its embassy to Jerusalem, based on President Bolsonaro’s past statements, has not as yet been realized, we are nonetheless pleased that the new Brazilian trade office will be located in the same city as Israel’s seat of government.

“This is especially so, in view of the tremendous pressure Mahmoud Abbas’ PA and other Arab governments have reportedly been placing on Brasilia to avoid any enhancement of Jerusalem’s status as Israel’s capital through opening a Brazilian government offices there.

“Mahmoud Abbas’ PA is opposed to anything that rolls back its ambition to see Israel isolated and ostracized as a prelude to its event elimination. The Brazilian government’s decision to establish a trade office in Jerusalem represents a flat reversal of its desires.

“It is, therefore, no surprise that the PA ambassador to Brazil, Alzeben Ibrahim ––  who, in 2011, stated that “Israel should disappear” –– has been so outspoken about the Brazilian decision, which he says may yet result in the PA recalling him from Brasilia.

“We praise President Bolsonaro and his government for their decision to establish a trade office in Jerusalem and look forward to the day, which hopefully will come soon, that Brazil relocates its embassy Jerusalem as well.”

We would love to hear from you! Please fill out this form and we will get in touch with you shortly.
Trending Z
Uncategorized April 4, 2019
FLASH: ISRAEL-JORDAN PEACE TREATY (1994) GUARANTEES JEWS ACCESS TO THE TEMPLE MOUNT – LET MY PEOPLE PRAY
Uncategorized April 4, 2019
ZOA Analysis: Most American Rabbis Who Are Boycotting Some Israeli Ministers Are From Extremist Left Wing Groups (J Street; T’ruah; JVP)
Uncategorized April 4, 2019
Israel’s “Right of Return” Grandparent Clause is De-Judaizing the Jewish State – Eliminate It
Uncategorized April 4, 2019
Exclusive: ZOA Accuses Ilhan Omar of Hating the U.S. ‘as Much as Israel,’ Lauds Kevin McCarthy for ‘Throwing Her Off the HFAC’
Center for Law & Justice
We work to educate the American public and Congress about legal issues in order to advance the interests of Israel and the Jewish people.
We assist American victims of terrorism in vindicating their rights under the law, and seek to hold terrorists and sponsors of terrorism accountable for their actions.
We fight anti-Semitism and anti-Israel bias in the media and on college campuses.
We strive to enforce existing law and also to create new law in order to safeguard the rights of the Jewish people in the United States and Israel.
Our Mission
ZOA STATEMENT
The ZOA speaks out for Israel – in reports, newsletters, and other publications. In speeches in synagogues, churches, and community events, in high schools and colleges from coast to coast. In e-mail action alerts. In op-eds and letters to the editor. In radio and television appearances by ZOA leaders. Always on the front lines of pro-Israel activism, ZOA has made its mark.
Related Articles
OP-ED BY: ZOA Staff J Street Poll Shows 72% of American Jews Support Building in Judea/Samaria