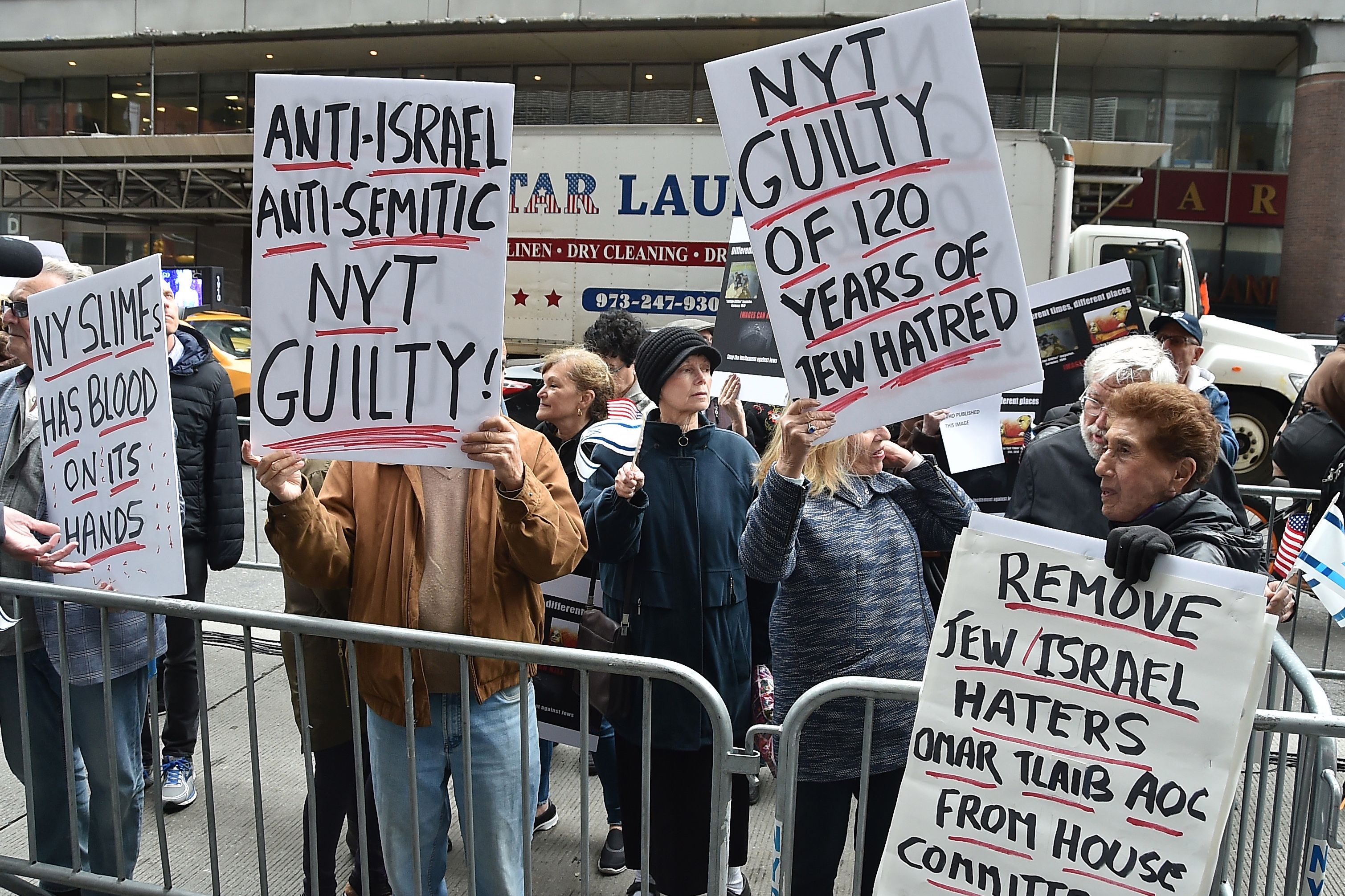 Enough is enough! ZOA condemns the relentless continuous Jew hatred The New York Times has displayed in its articles, editorials, choices of op-eds and letters, mindlessly and unfairly and negligently attacking the Jewish State.

There needs to be a wholesale overhaul of the New York Times’ long and continuing history of bias, inaccuracies, distortions, downright dishonesty, and propaganda warfare against the Jewish people and the Jewish State of Israel.

And those editors involved in allowing these Jew-Hating cartoons to be published must be fired immediately. If this was an anti-Muslim or anti-Black or anti-Gay cartoon, we’re sure heads would roll!

ZOA would like to thank our members and friends and the 500 people who showed up on short notice to protest in front of the New York Times building on Monday evening. The protest highlighted that the Times’ recent horrendous antisemitic cartoons are endemic of the Times’ longstanding anti-Jewish bias and propaganda warfare against the Jewish nation.

There needs to be a wholesale overhaul of the New York Times’ long and continuing history of bias, inaccuracies, distortions, downright dishonesty, and propaganda warfare against the Jewish people and the Jewish State of Israel.

During Monday’s protest, co-organizer and ZOA honoree Jeff Weisenfeld called ZOA’s Director of Special Projects Liz Berney, Esq. to the podium to speak about and show the crowd a book Ms. Berney brought along, The Media’s War Against Israel – written in 1986! Ms. Berney told the crowd that the major portion of the book “The New York Times Propaganda War Against Israel,” documented that over three decades ago, The New York Times was doing the exact same thing it is still doing today – dehumanizing Israelis, humanizing Jew-haters with puff piece “human interest” stories, and consistently downplaying and mislabeling violent Palestinian Arab aggression and Islamic terrorism against Jews. Decades ago, and still today, the Times calls Arabs who knife, murder and throw rocks, pipe bombs and burning torches at Jews, mere “protesters.”

It should be a wake-up call that just two days before the antisemitic murderous attack on the Poway Chabad synagogue, The New York Times international edition printed its despicable Der Stürmer-style antisemitic cartoon depicting Jews/Israel’s leader as a guide dog pulling along owner America, represented by a blind, yarmulke-wearing President Trump. And despite the outcry, the Times then published another antisemitic cartoon of Israel’s prime minister, with an exaggerated nose, coming down from a mountain holding tombstone-shaped tablets emblazoned with a Jewish star and a selfie-stick – falsely implying that Judaism and Israel’s leaders are ugly and arrogant with a Moses G-D like complex.

But The New York Times has not woken up or changed. Its apology and attempt to excuse its shameful antisemitic cartoon, as the result of a “faulty process,” was woefully insufficient. And the Times editorial yesterday, entitled “A Rising Tide of Anti-Semitism,” falsely portrayed the Times’ decades of anti-Israel propaganda as “good-faith criticism” of Israel. The Times editorial also tried to deflect attention from its own propaganda warfare against the Jewish people by falsely maligning President Trump as failing to speak out against antisemitic groups. In fact, as Morton Klein’s recent Congressional testimony documented (see pp. 20-24), the president has spoken out and acted against antisemitic groups numerous times, including at Charlottesville. The New York Times misleadingly fails to report this.

The New York Times must finally change! The New York Times is notorious for burying news about the ongoing Holocaust in the 1940s, thereby likely contributing to the allies’ failure to take needed actions to stop the murder of millions of Jews.

And the Times coverage is stoking the fires of antisemitism today.

Let’s look at a recent typical New York Times article entitled “Protest at Gaza Fence Is Mostly Peaceful as Both Sides Urge Restraint” (Mar. 30, 2019). The article once again uses the labels “protests” and “protestors” to refer to violent Arab riots and rioters; and uses the non-descript, nameless emotionless label “several Israelis” to refer to the Jewish families – seven innocent people including two infants, who were injured by a recent Hamas attack on their home in central Israel. By contrast, the article names and humanizes “a Palestinian medic, Rouzan al-Najjar” as “one of some 196 people killed in the protests” last June. The Times article thus misleadingly leaves the impression that 196 Arab mere protestors were killed. In fact, Hamas’ and Palestinian Islamic Jihad’s statements last May admitted that 85% of those killed were their gunmen/operatives. The Times also never mentions the IDF video of Rouzan al-Najjar throwing a grenade at the IDF, or the fact that the IDF investigation showed that no one aimed at al-Najjar, and al-Najjar was likely killed by ricocheting bullet. (Instead, the article claims that Israel admitted the killing was “unintentional.”)  And, the Times never mentions the thousands of innocent Jews maimed and murdered by violent Palestinian-Arab attacks.

The March 30 New York Times article continues its anti-Israel propaganda by ignoring the prime, stated purpose of the Gazan riots – to breach the border to murder Jews and “eat the Jews’ livers.” Instead the article misleadingly claimed that the Gazan “protests” were aimed at “ending the years-old Israeli-led blockade of Gaza, which has restricted the movement of people and goods in and out of the territory and blockaded its access to the Mediterranean.” That statement dishonestly ignores that the Israeli blockade merely prevents Hamas from importing weapons and more rockets, and that Israel sends hundreds of truckloads of goods into Gaza. The Times article also cites “Palestinians’ demands to return to their ancestral lands in what is now Israel” – a propaganda statement that ignores that Israel is the Jewish people’s ancestral land.

And that’s just one of a drumbeat of dishonest anti-Israel New York Times articles. Many of its articles are worse. Notably, The New York Times spent enormous resources last year “investigating” al-Najjar’s death, including producing lengthy videos, still on YouTube, maligning Israel, and an article falsely accusing Israel of a “possible war crime.”

We would love to hear from you! Please fill out this form and we will get in touch with you shortly.
Trending Z
News May 2, 2019
New Biden Nominees Opposed Abraham Accords & Involved in Israeli Election Interference
Uncategorized May 2, 2019
ZOA Letter to DOJ & FBI on New “Mapping Project” Antisemitic Threat by ZOA Pres. Morton Klein, Dir. of Research/Special Projects Liz Berney, Esq., Dir. Center for Law & Justice Susan Tuchman, Esq.
News May 2, 2019
ZOA’s Condemnation of Black Lives Matter Defended by JNS’ Tobin: Jews Supporting BLM Empowered Antisemitism
Op-Ed May 2, 2019
ZOA’s Mort Klein JPost Op-Ed: BDS Mapping Project Targets Every Jew, Including Left Wing, Israelophobic Jews
Center for Law & Justice
We work to educate the American public and Congress about legal issues in order to advance the interests of Israel and the Jewish people.
We assist American victims of terrorism in vindicating their rights under the law, and seek to hold terrorists and sponsors of terrorism accountable for their actions.
We fight anti-Semitism and anti-Israel bias in the media and on college campuses.
We strive to enforce existing law and also to create new law in order to safeguard the rights of the Jewish people in the United States and Israel.
Our Mission
ZOA STATEMENT
The ZOA speaks out for Israel – in reports, newsletters, and other publications. In speeches in synagogues, churches, and community events, in high schools and colleges from coast to coast. In e-mail action alerts. In op-eds and letters to the editor. In radio and television appearances by ZOA leaders. Always on the front lines of pro-Israel activism, ZOA has made its mark.
Related Articles
OP-ED ZOA: Why Are We Funding a PA Terror Regime Which Is Also A Police State?