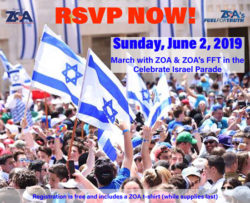 The Zionist Organization of America (ZOA) marks Israel’s 71st anniversary of modern statehood, celebrating the miracle of a nation reborn after losing national independence in antiquity, and having risen, amidst seven decades of unrelenting hostility, war and siege, into thriving nationhood, a beacon of pride to the Jewish people, an in-gatherer of the exiles and a stunning over-achiever in the modern world economy.

“With heartfelt joy, we celebrate the rebirth of the Jewish people as a sovereign Jewish nation, inhabiting the same land, upholding the same faith and speaking the same language that our ancestors did more than two thousand years ago.

“What other nation has had such a miraculous record of survival and continuity?

“After 2000 years of exile, homelessness and sometimes unimaginable persecution, culminating in the most horrific genocide of all, the Shoah in Europe, the rebirth of Jewish statehood is an unparalleled event.

“We are immensely privileged to be part of a special generation in Jewish history, the first generation in 2000 years, which can truly give thanks that the Jewish nation is independent, flourishing and in command of her own destiny.

“None of this looked probable in 1948 when independence was declared upon the ending of British rule under a League of Nations mandate. Israel was immediately invaded by the armed forces of six neighboring Arab states, as well as by internal Palestinian Arab militias. The survival of the country was secured only after months of grueling struggle in which Jordan seized and illegally occupied the Jewish heartlands of Judea/Samaria and eastern Jerusalem, and 6,000 Jews, one percent of the new nation’s population, were killed.

“No one who lived through those first few years of Israel’s modern sovereign existence would ever have imagined that, today, Israel would be the economic and military powerhouse, and hub of medical and scientific discovery, innovation and research that she is today.

“It is difficult to believe that a country of fewer than nine million people has produced so many successes in the domains of science and medicine, as well as in commerce, agriculture, architecture, art, music and literature.

“Israel ranks today eighth in the world in the Power category of the Best Countries Index, which measures countries’ global influence. Only the large and populous U.S., Russia, China, Germany, Britain, France and Japan come ahead of Israel. Israel’s population stands at just under 9 million, compared to the country of a mere 600,000 Jews who fended off the combined assault of the Arab states in 1948.

“Today, Israel’s gross domestic product stands at $355 billion, 700% higher than it was thirty years ago. Per capita GDP is $38,000, nearly four times what it was just a generation ago. Inflation today is a mere 1%, compared to 16% thirty years ago, a figure that itself was a huge triumph after the triple-digit inflation of the early 1980s.

“Israel is ranked third in the world for number of people who are university-educated per capita, behind only Canada and Japan. Israel’s credit rating is AA-, putting it in an elite club of only 17 nations. The average wage has risen by 34% in the past decade, while Israel is a world leader in start-ups, patents, and extraordinary medical discoveries and developments. Despite wars and military flares ups, Israel is ranked 11th on the World Happiness Report –– telling evidence of Israel’s resilience and the psychological strength of its society.

“Israel is also making extraordinary strides on the world stage, cementing closer ties with major powers like India and Brazil and many African nations, while U.S.-Israel ties are closer, warmer and stronger than at any time in the history of Israel. Israel is fighting back against the entrenched bias and hostility of international organizations like the United Nations and UNESCO. And the U.S. recognition of Jerusalem as Israel’s capital and of Israeli sovereignty over the Golan Heights are major historical developments that will be of long-term advantage to Israel, as well as being acts of justice and truth.

“Today, Jews pray at the Western Wall, something we were denied during Jordan’s illegal occupation of eastern Jerusalem from 1948-1967. Judea/Samaria today are witness to the flourishing of Jewish cities, towns, farms and hamlets. This land, promised to the Jewish people by G-d in the Bible and by the League of Nations and the United Nations is an integral part of the Jewish state today.

“Israel did not seek the wars that led to the reunification of historic Jerusalem and Judea/Samaria with the state of Israel, but these lands have been miraculously restored to Jewish control. At the same time, new convergences unimaginable only a few short years ago, such as the behind-the-scenes rapprochement and strategic cooperation between Israel and several Sunni states, including most notably Saudi Arabia, have resulted from the looming threats of Iranian hegemony and nuclear weaponry.

“Under normal circumstances, Israel’s achievements would be extraordinary. But as a nation that re-established herself in the teeth of enormous hostility, and that has so many disadvantages in key areas, such as having limited territory, wealth and resources, Israel’s accomplishments are truly remarkable even miraculous.

“The looming Iranian nuclear threat will soon be dealt with, one way or another. Israel has been preparing to meet this threat for years, and she will do so if and when all other avenues have failed.

“For all the problems that afflict Israel, on this, the 71st anniversary of Israel’s sovereign independence, we can all take tremendous pride in the vibrancy, resilience, innovation, morality and enterprise of the modern Jewish state of Israel.”

To march with ZOA at the Celebrate Israel Parade in June, click here!

We would love to hear from you! Please fill out this form and we will get in touch with you shortly.
Trending Z
News May 10, 2019
ZOA Deplores that Pres. Trump Dined with Jew-Haters Kanye West & Nick Fuentes, and Demands he Condemn Them
Uncategorized May 10, 2019
ZOA Honors Trump With Rarely Given Herzl Award for His Great Pro-Israel Work – Joins Ranks of Balfour, Truman, Begin, Meir, Ben-Gurion
News May 10, 2019
ZOA Responds to Questions About Pres. Trump, Kanye West, Fuentes, etc. Issue
Uncategorized May 10, 2019
Zionist Organization of America Honors Donald Trump for Support for Israel, Jewish Community
Center for Law & Justice
We work to educate the American public and Congress about legal issues in order to advance the interests of Israel and the Jewish people.
We assist American victims of terrorism in vindicating their rights under the law, and seek to hold terrorists and sponsors of terrorism accountable for their actions.
We fight anti-Semitism and anti-Israel bias in the media and on college campuses.
We strive to enforce existing law and also to create new law in order to safeguard the rights of the Jewish people in the United States and Israel.
Our Mission
ZOA STATEMENT
The ZOA speaks out for Israel – in reports, newsletters, and other publications. In speeches in synagogues, churches, and community events, in high schools and colleges from coast to coast. In e-mail action alerts. In op-eds and letters to the editor. In radio and television appearances by ZOA leaders. Always on the front lines of pro-Israel activism, ZOA has made its mark.
Related Articles
OP-ED BY: Morton A. Klein ZOA: Iran Pres. Rouhani’s Boasting of Deceiving West on Iran’s Nuclear Weapons Program Underscores the Fraudulence of his Moderate Image