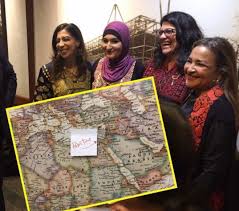 Rep. Tlaib’s Despicable Holocaust Comments and Other Actions Show Tlaib Must Be Thrown Out of Congress
News Press Release

Congresswoman Rashida Tlaib (D-MI)’s despicable, false, insensitive Holocaust comments on Friday, and Tlaib’s other activities in recent weeks once again vividly demonstrate that Tlaib must be removed from Congress or removed from her Congressional Committees.

Incredibly, Tlaib stated that thinking about the Holocaust always gives Tlaib a “calming feeling.” Only the most cold-blooded person, a person who wishes evil to innocent Jewish people, can feel “calmed” by the murder of six million innocent Jewish men, women and children!  When we – and any caring person – think of the Holocaust, we feel horror and deep, unspeakable pain.

Tlaib also went on and claimed that her “Palestinian” ancestors were “wiped out in many ways” and some lost their lives and human dignity “in the name of trying to provide a safe haven for the Jews.” In fact, long before the Holocaust, the Jewish people had the international legal right (and historical and religious right) to reestablish the Jewish nation in Israel.

Nonetheless, while Israel’s Jews sought to live in peace with the Arabs, “Palestinian” Arabs worked to destroy the Jewish people. “Palestinian” Arabs helped persuade the British to slam shut the doors of the Jewish homeland prior to World War II, thereby assuring the deaths of 6 million innocent Jews at the hands of the Nazis. “Palestinian” Arabs brutally murdered hundreds of Jews in pogroms in Hebron, Jerusalem and Zfat in 1929 and 1936-1939. Jerusalem Grand Mufti Hajj Amin al-Husseini collaborated with Hitler in the murder of eastern European Jewry, plotted and incited the murder of Israel’s Jews, and helped develop anti-Jewish Muslim propaganda concepts that are still used today.  And after Israel declared her independence on May 14, 1948, local Arabs joined the six Arab nations who immediately went to war to annihilate the Jewish nation, murdering one percent of Israel’s Jewish population.The Jews are the indigenous people of Israel. So-called “Palestinian” Arabs moved into the area from North Africa and surrounding Arab countries after large numbers of Jews returned to the Jewish homeland in the late 1800s and early 1900s, due to the jobs and better economy that Jewish pioneers developed.

Yet, on the Yahoo News “Skullduggery” podcast on Friday, Tlaib stated: “There’s always kind of a calming feeling, I tell folks, when I think of the Holocaust, and the tragedy of the Holocaust, and the fact that it was my ancestors — Palestinians — who lost their land and some lost their lives, their livelihood, their human dignity, their existence in many ways, have been wiped out, and some people’s passports,” and “And, just all of it was in the name of trying to create a safe haven for Jews, post-the Holocaust, post-the tragedy and the horrific persecution of Jews across the world at that time. And, I love the fact that it was my ancestors that provided that, right, in many ways, but they did it in a way that took their human dignity away and it was forced on them.”  (“Rashida Tlaib Slammed by House GOP Over Comments on Holocaust, Palestinians,” Fox News, May 12, 2019.)

Imam Suleiman calls for deadly intifadas against Israel (meaning the murder and maiming of thousands of Jews); falsely compares Israel to the KKK and to the Nazis; falsely calls Israel an “illegal occupation”;  falsely calls the U.S. Embassy in Jerusalem “an illegal embassy”; falsely accuses Israel of committing massacres, apartheid, genocide and ethnic cleansing; demonizes pro-Israel Jews and others by stating that “The Zionists are the enemies of God, His Messengers, sincere followers of all religions, and humanity as a whole”; calls Jews “apes and pigs,” “deceitful” and “people who incurred God’s wrath”; calls Christians “misguided”; and threatened “promiscuous” Muslim women that their fathers will kill them (so-called honor killings) – to name a few  (See “KKK, Apartheid, Ethnic Cleansing: The Anti-Israel Fury of Imam Chosen by Democrats to Give Congress Prayer,” by John Gage, Washington Examiner, May 10, 2019; “Why Did Democrats Invite a Hate Preacher into Congress?,” by Dominic Green, Spectator, May 10, 2019; and “Imam Who Gave Congressional Invocation: “Deceitful” Jews, Per Koran, Are Apes and Pigs,” by Dr. Andrew Bostom, May 13, 2019.)

Tlaib’s Own Anti-Israel Statements and Actions: It is unfortunately hardly surprising that Tlaib is supporting Omar Suleiman, in light of Tlaib’s own vicious anti-Israel statements and actions. Rep. Tlaib calls Israel a “racist country” and falsely claims that Israel discriminates against those “darker skinned”; supports Israel’s destruction in favor of an Arab-dominated state (“It has to be one state”), and “absolutely” backs withholding U.S. aid from Israel and supports BDS. On her first day in office in January, Rep. Tlaib “corrected” the world map in her Congressional office by placing a post-it with the word “Palestine” over Israel, thereby indicating that she supports eliminating the Jewish state of Israel, and replacing Israel with a 23rd Arab state. Tlaib also wrapped herself in the flag of the hostile Palestinian Authority regime, to celebrate her election victory. (See also “ZOA: Why Are Democrats Not Condemning Anti-Israel Reps. Tlaib, Omar & Ocasio-Cortez?,” Jan. 16, 2019; and “ZOA Condemns Newly-Elected Rashida Tlaib (D-MI) For Wrapping Herself in P.A. Flag, Lies About Israel,” Nov. 13, 2018.)

Tlaib’s Abusive Congressional Delegation Invite: Tlaib is also now abusing her position (and apparently Congressional funds) to recruit a “Congressional delegation” to join her on an anti-Israel trip to “the Occupied Territories in Palestine” – the false name that Tlaib’s formal written invitation gives to Israel/Judea and Samaria.

Jewish Insider explained: “Rep. Tlaib’s use of the phrase “Congressional delegation” is notable. If accurate, a CODEL [Congressional Delegation] would imply that the trip is officially supported by Congress, and paid for with congressional funds. According to a congressional source, that would mean that the funding was approved by the Speaker of the House and the relevant Chair and Ranking Member of a committee.” ZOA calls on Speaker Pelosi to immediately disapprove any such funding.

Tlaib’s Support for Anti-Israel BDS:  Tlaib also openly supports the antisemitic, hateful, discriminatory “Boycott, Divestment and Sanctions” (BDS) movement – which demonizes Jews and Israel, aims to completely destroy Israel, and is affiliated with terror groups Hamas, and Palestinian Islamic Jihad, and the Popular Front for the Liberation of Palestine, as well as Fatah.  BDS targets the Israeli people, Jews around the world, universities and academic exchanges with Israel, and American and worldwide companies that do business with Israel.

Tlaib’s Association With Fervid Hezbollah Supporter and Anti-Israel Terrorists: Tlaib also invited anti-Israel extremist, fervid Hezbollah supporter, and anti-Israel Al Awda head Abbas Hamideh to her Congressional swearing in, reception and dinner party, and posed for a photo with him, holding a poster in which Tlaib is wearing a Palestinian scarf. Hamideh advocates for millions of Arabs to overrun Israel, equates Zionism to Nazism, and called Israel a “terrorist entity.” (“Rashida Tlaib Poses With Hezbollah-Backing Anti-Israel Activist,” Fox News, Jan. 15, 2019.)

“As a child of Holocaust survivors, who lost many members of my family in this tragedy, and as the president of an organization that was involved over 100 years ago in assuring the Jewish people’s international legal rights to our ancestral land, I am horrified and appalled at Rep. Tlaib’s false and grossly insensitive Holocaust comments, which followed her long string of other antisemitic, anti-Israel comments and actions, all made without any consequence to her. It is long past time for Congress to remove Tlaib from Congress or at least her committee posts.”

We would love to hear from you! Please fill out this form and we will get in touch with you shortly.
Trending Z
Uncategorized May 13, 2019
FLASH: ISRAEL-JORDAN PEACE TREATY (1994) GUARANTEES JEWS ACCESS TO THE TEMPLE MOUNT – LET MY PEOPLE PRAY
Uncategorized May 13, 2019
ZOA Analysis: Most American Rabbis Who Are Boycotting Some Israeli Ministers Are From Extremist Left Wing Groups (J Street; T’ruah; JVP)
Uncategorized May 13, 2019
Israel’s “Right of Return” Grandparent Clause is De-Judaizing the Jewish State – Eliminate It
Uncategorized May 13, 2019
Exclusive: ZOA Accuses Ilhan Omar of Hating the U.S. ‘as Much as Israel,’ Lauds Kevin McCarthy for ‘Throwing Her Off the HFAC’
Center for Law & Justice
We work to educate the American public and Congress about legal issues in order to advance the interests of Israel and the Jewish people.
We assist American victims of terrorism in vindicating their rights under the law, and seek to hold terrorists and sponsors of terrorism accountable for their actions.
We fight anti-Semitism and anti-Israel bias in the media and on college campuses.
We strive to enforce existing law and also to create new law in order to safeguard the rights of the Jewish people in the United States and Israel.
Our Mission
ZOA STATEMENT
The ZOA speaks out for Israel – in reports, newsletters, and other publications. In speeches in synagogues, churches, and community events, in high schools and colleges from coast to coast. In e-mail action alerts. In op-eds and letters to the editor. In radio and television appearances by ZOA leaders. Always on the front lines of pro-Israel activism, ZOA has made its mark.
Related Articles
OP-ED BY: Morton A. Klein, ZOA Jerusalem is Holy to Jews, Not to Muslims