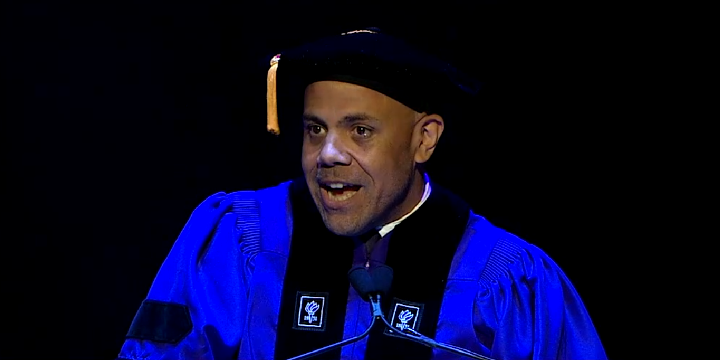 The Zionist Organization of America is deeply dismayed that Northwestern University President Morton Schapiro and Provost Jonathan Holloway stated that antisemitic, Israelophobic pro-BDS-propagandist Steven William Thrasher will still be joining the faculty of Northwestern’s Medill School of Journalism, Media, Integrated Marketing Communications on June 1, 2019. Thrasher hijacked his NYU graduation ceremony and speech last week to defame Israel, and to praise and promote Jew-hating terror-linked Boycott, Divestment and Sanctions (BDS) and virulent BDS groups, including Students for Justice in Palestine (SJP), which intimidate, harass, assault and torment American Jewish college students. Thrasher also called on everyone else to do the same as he did.

Notably, Thrasher insisted during his NYU speech that it is everyone’s “duty” and is “what we are called to do” “on every campus where we serve” and “every place where we work” to attack Israel, and support anti-Jewish BDS and BDS groups. Thrasher thus clearly revealed that he will likely also abuse his about-to-begin Northwestern professorship to defame Israel and promote virulent Jew-hating groups.

It is also notable that Thrasher engaged in deceit in order to use his NYU graduation speech to defame Israel and promote anti-Jewish BDS groups. NYU President Andrew Hamilton revealed that Thrasher excluded his offensive anti-Israel pro-BDS rant “from the version of the speech he had submitted before the ceremony.” (“Statement from NYU President Andrew Hamilton Decrying Student Remarks at GSAS Graduation,” NYU News Release, May 23, 2019.) Thrasher thus proved that he is untrustworthy, and that he will likely “do whatever it takes” to continue promoting his hate-mongering views at every opportunity.

The advertisement for Thrasher’s position noted that the faculty member “will contribute within the school, university and community.” Thrasher’s position will thus enable him to spread his anti-Jewish and anti-Israel bile throughout the community, as well as in the classroom.

Simply put, Northwestern should not hire an Israelophobic professor who calls for supporting the reprehensible, violent antisemitic groups who are dedicated to Israel’s destruction and the demonization of Israel and the Jewish people.

Thrasher’s appointment also does a disservice to the LGBT community, which his professorship is supposed to focus on. Any sensible, unbiased LGBT member should support Israel over the violently anti-gay Palestinian-Arab territories. Gay Palestinians are tortured and at risk of being murdered in Gaza and the Palestinian-Authority (as well as Middle-East Muslim countries), and routinely flee to Israel for safety.

Yet, despite all the damage to Northwestern and Jewish students that will likely result from Thrasher’s impending professorship, Northwestern’s president and provost absurdly defended Thrasher’s appointment as a matter of “academic freedom” and “inclusivity,” and because other Northwestern professors also support BDS. This ignores the fact that BDS opposes academic freedom and inclusivity. BDS aims to exclude the pro-Israel community from campus life, demands that Jewish students be ousted from universities, and attempts to destroy relationships with Jewish and Israeli academic and other institutions. SJP and BDS promote “anti-normalization” – meaning opposing even normal conversations with Jewish and pro-Israel students, and opposing any normal contact with Israel.

At NYU, the organizations Thrasher praised, including SJP and JVP, amassed a coalition of over 50 student groups who pledged to boycott Israeli goods, academic institutions, off-campus pro-Israel groups including the ZOA, and NYU’s pro-Israel student clubs. This pledge included refusing to co-sponsor any events with pro-Israel NYU student clubs.

And this past December, threats caused the temporary closure of NYU’s Jewish Student Center.  The threats allegedly came from an SJP member who also wrote: ““thanks to whoever got my [Twitter] account suspended just cuz i expressed my desire for zionists to die.”

Thus, when a university countenances those who promote BDS and groups such as SJP, the university is harming academic freedom and inclusivity, and enabling a hostile environment that impedes the safety and academic freedom of Jewish students and others on campus.

Northwestern’s statement read, in pertinent part:  “Many were understandably offended by some of the comments made by Dr. Thrasher during his commencement speech at New York University earlier this week. We do not share all of his views, nor do we feel commencement was the appropriate venue to express them. However, academic freedom assures his right to hold them.  While Dr. Thrasher will not be the first Northwestern faculty member who supports the Boycott, Divestment, Sanctions (BDS) movement, Northwestern as an institution unequivocally rejects BDS. To the contrary, we value our many relationships with a variety of universities and research centers in Israel.”  (“Statement regarding Steven Thrasher by President, Provost,” Northwestern Announcement, May 24, 2019.)

It is also appalling that Steven Thrasher will occupy the new Daniel H. Renberg endowed Chair in Journalism at Northwestern. The chair is supposed to honor Daniel H. Renberg (1930-2014), a philanthropist who supported the US Holocaust Museum in Washington, D.C., and the Los Angeles Museum of the Holocaust. The first “official” act that began the Holocaust was Nazi Germany’s anti-Jewish boycott (April 1, 1933). Mr. Renberg must be rolling over in his grave knowing that the first occupant of the chair named for him propagates the same anti-Jewish hatred that Mr. Renberg opposed. At an absolute minimum, Northwestern must rescind Thrasher’s appointment to the Daniel H. Renberg Chair.

Thrasher stated during his anti-Israel NYU graduation speech:  “I am so proud, so proud, of NYU’s chapters of Students for Justice in Palestine [SJP] and Jewish Voices for Peace [JVP], and of GSOC [the Graduate Student Organizing Committee labor union representing NYU’s graduate teaching and research assistants], and of the Student Government, and of my colleagues in the Department of Social and Cultural Analysis, for supporting the Boycott, Divestment, and Sanctions movement against the apartheid state government in Israel.  Because this is what we are called to do. This is our NYU legacy, that we are connected in radical love.  And we have a duty and a privilege in this position to protect not the most popular amongst us, but the most vulnerable amongst us on every campus where we serve, and every community where we live, and every place where we work.  This is our duty.”

Simply put, Northwestern should not hire an Israelophobic professor who calls for supporting the reprehensible, violent antisemitic groups who are dedicated to Israel’s destruction and the demonization of Israel and the Jewish people.

We would love to hear from you! Please fill out this form and we will get in touch with you shortly.
Trending Z
Uncategorized May 29, 2019
FLASH: ISRAEL-JORDAN PEACE TREATY (1994) GUARANTEES JEWS ACCESS TO THE TEMPLE MOUNT – LET MY PEOPLE PRAY
Uncategorized May 29, 2019
ZOA Analysis: Most American Rabbis Who Are Boycotting Some Israeli Ministers Are From Extremist Left Wing Groups (J Street; T’ruah; JVP)
Uncategorized May 29, 2019
Israel’s “Right of Return” Grandparent Clause is De-Judaizing the Jewish State – Eliminate It
Uncategorized May 29, 2019
Exclusive: ZOA Accuses Ilhan Omar of Hating the U.S. ‘as Much as Israel,’ Lauds Kevin McCarthy for ‘Throwing Her Off the HFAC’
Center for Law & Justice
We work to educate the American public and Congress about legal issues in order to advance the interests of Israel and the Jewish people.
We assist American victims of terrorism in vindicating their rights under the law, and seek to hold terrorists and sponsors of terrorism accountable for their actions.
We fight anti-Semitism and anti-Israel bias in the media and on college campuses.
We strive to enforce existing law and also to create new law in order to safeguard the rights of the Jewish people in the United States and Israel.
Our Mission
ZOA STATEMENT
The ZOA speaks out for Israel – in reports, newsletters, and other publications. In speeches in synagogues, churches, and community events, in high schools and colleges from coast to coast. In e-mail action alerts. In op-eds and letters to the editor. In radio and television appearances by ZOA leaders. Always on the front lines of pro-Israel activism, ZOA has made its mark.
Related Articles
OP-ED BY: Morton A. Klein, ZOA Jerusalem is Holy to Jews, Not to Muslims