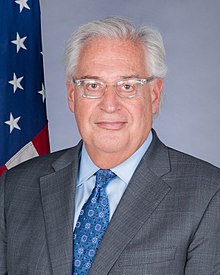 ZOA Praises Amb. Friedman for Stating Israel Has Right to Annex Some of the “West Bank” (Judea/Samaria)
News Press Release

The Zionist Organization of America praises U.S. Ambassador to Israel David Friedman for stating in an interview with the New York Times that Israel has the right to annex some of the West Bank (the Jordanian name for Judea/Samaria). (See “U.S. Ambassador Says Israel Has Right to Annex Parts of West Bank,” NY Times, June 8, 2019.) Israel surely has this right – and more: Under binding international law and treaties – which have never been lawfully abrogated – Israel has the right to all of Judea/Samaria. Moreover, Israel’s retention and formal annexation of the Jewish communities in Judea/Samaria is long overdue, will improve life for all of Israel’s citizens, and will enhance Israel’s security and peace in the region.

The leftwing critics of Ambassador Friedman’s statement are ignoring the lessons of Gaza. When Israel uprooted 10,000 Jews from the beautiful Jewish communities in Gaza, in the name of “peace,” the outcome was that Gaza’s former Jewish communities became the launching pad for tens of thousands of Hamas rocket attacks and other terror attacks on Israeli civilians. It would be an unthinkable nightmare for Israel to remove the 400,000 Jews from their homes in the Jewish heartland in Judea/Samaria. Formal annexation of, at a minimum, the Jewish communities in Judea/Samaria, would merely recognize longstanding reality.

Ambassador Friedman’s recognition of this reality is nothing new. Previous U.S. presidents recognized that at least part of Judea/Samaria would remain part of Israel.

After the Six-Day War, then-President Lyndon Johnson stated: “There are some who have urged, as a single simple solution, an immediate return to the situation as it was on June 4 [1967] [when Jordan unlawfully occupied Judea/Samaria and eastern Jerusalem] . . . [T]his is not a prescription for peace but for renewed hostilities. . . The main responsibility for the peace of the region depends upon its own peoples and its own leaders of that region.”

In 2004, when Israel set forth its ill-fated plan to withdraw from Gaza, then-President George W. Bush’s letter to then-Israeli Prime Minister Ariel Sharon assured Israel regarding its other territories (i.e., Jewish settlements in Judea/Samaria): “it is unrealistic to expect that the outcome of final status negotiations will be a full and complete return to the armistice lines of 1949.”

And significantly, in 1925, then-President Calvin Coolidge signed the 1924 Anglo-American Convention [Treaty], which entrusted to the British Mandatory administration the area that is now Israel including Jerusalem and Judea/Samaria, with the responsibility to “secure the establishment of the Jewish national home” there, and “to facilitate. . . in cooperation with the Jewish Agency . . . close settlement by Jews on the land.” The Convention was ratified by the U.S. Senate in 1925, making it a binding U.S. treaty obligation – a binding treaty guaranteeing the Jewish people’s right to Judea/Samaria that was never lawfully overturned.

The Anglo-American Convention also tracks the terms of the Mandate for Palestine – another internationally binding treaty guaranteeing the Jewish people’s rights to settle and reestablish the Jewish homeland in the land of Israel comprising the full mandatory area.

Fundamental international law principles (uti juris possidetis) also give Israel the right to the full mandatory area (including Judea/Samaria) as the successor to the mandate.

Furthermore, the United States was a party to the United Nations Charter – which also has the status of a treaty and international law. UN Charter Article 80 (referred to as “the Jewish people’s clause”) confirmed and continued in effect the rights of the Jewish people under the British Mandate.

The critics who predict catastrophe if Israel annexes what is rightfully hers are the same critics who have been wrong time and again. For instance, these same groups, such as the leftwing Israel Policy Forum, predicted disastrous consequences if the U.S. Embassy moved to Jerusalem – and they were wrong.

The New York Times report on its interview with Ambassador Friedman was inappropriate in tone and misleading. For instance, the Times wrote “Mr. Friedman has seldom been accused of being evenhanded as ambassador.” It is not a virtue to be “evenhanded” towards our democratic ally Israel and the terrorist, murder-inciting Palestinian Authority regime. The U.S. should favor our ally.

The Times also misleadingly asserted: “Most countries view Israeli settlements in the West Bank, territory captured in the 1967 Arab-Israeli war, as illegal. Israel disputes this, citing historical, political and religious ties as well as security needs.” The Times statement left out that in 1948-1949, Jordan captured and illegally occupied Judea/Samaria and eastern Jerusalem, and murdered or expelled all the Jews living there, and that Israel recaptured this area in the 1967, after Jordan attacked Israel again – despite Israel begging Jordan not to do so. The Times also omitted Israel’s right to Judea/Samaria, under binding international law.

We would love to hear from you! Please fill out this form and we will get in touch with you shortly.
Trending Z
Uncategorized June 18, 2019
ZOA Analysis: Most American Rabbis Who Are Boycotting Some Israeli Ministers Are From Extremist Left Wing Groups (J Street; T’ruah; JVP)
Uncategorized June 18, 2019
ZOA: Israel’s Reasonable Judicial Reform Proposals Are Good for Democracy, the Rule of Law and the Economy
News June 18, 2019
ZOA is Disappointed, Offended and Frightened by 211 U.S. House Votes Supporting Jew-Hating, Israel-Hating Rep. Ilhan Omar
Uncategorized June 18, 2019
Israel’s “Right of Return” Grandparent Clause is De-Judaizing the Jewish State – Eliminate It
Center for Law & Justice
We work to educate the American public and Congress about legal issues in order to advance the interests of Israel and the Jewish people.
We assist American victims of terrorism in vindicating their rights under the law, and seek to hold terrorists and sponsors of terrorism accountable for their actions.
We fight anti-Semitism and anti-Israel bias in the media and on college campuses.
We strive to enforce existing law and also to create new law in order to safeguard the rights of the Jewish people in the United States and Israel.
Our Mission
ZOA STATEMENT
The ZOA speaks out for Israel – in reports, newsletters, and other publications. In speeches in synagogues, churches, and community events, in high schools and colleges from coast to coast. In e-mail action alerts. In op-eds and letters to the editor. In radio and television appearances by ZOA leaders. Always on the front lines of pro-Israel activism, ZOA has made its mark.
Related Articles
OP-ED BY: ZOA Staff J Street Poll Shows 72% of American Jews Support Building in Judea/Samaria