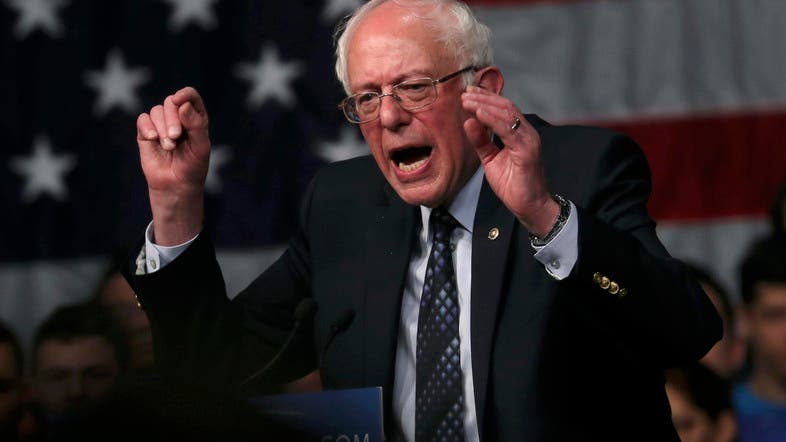 ZOA is appalled and deeply pained that Senator Bernie Sanders recently hired yet another vicious, radical-Islamic Jew-hating, Israel-hating, promoter of anti-Semitic boycotts, Amer Zahr, as a Sanders’ campaign surrogate, and then accepted the endorsement of the anti-Semitic, Israel-hating, anti-Israel boycott-promoting “squad” of AOC, Rashida Tlaib and Ilhan Omar.

Apparently, Yom Kippur and Sanders’ recent heart surgery, which used Israeli-developed medical technology to save his life, did not soften Sanders’ heart towards the innocent, beleaguered Jewish and Israeli people.

ZOA calls on all other Jewish leaders and organizations to join ZOA in demanding that Bernie Sanders fire his entourage of anti-Semitic surrogates and staffers, and disassociate himself from his hateful anti-Semitic endorsers.

ZOA calls on all other Jewish leaders and organizations to join ZOA in demanding that Bernie Sanders fire his entourage of anti-Semitic surrogates and staffers, and disassociate himself from his hateful anti-Semitic endorsers.

New Bernie Sanders surrogate Amer Zahr repeatedly demonizes Israel with outrageous false accusations, such as comparing Israel to ISIS and Nazis. Zahr falsely claimed that Israel engaged in “Jewish jihad,” and that Israel has “policies of extrajudicial killing, house demolitions, massacres, land confiscations,” and that “essentially everything Israel has done since 1948, are recast [sic] as some sort of ‘revenge’ for the Holocaust.” Amer Zahr also falsely describes Jewish residents of the thousands-of-years-old Jewish homeland of Judea and Samaria as “illegal settlers (let’s call them ‘visitors’) [that] are fully armed, both with guns and the authority to assault Palestinians without accountability.” Amer also falsely and absurdly wrote: “There are a bunch of non-prisoners roaming throughout the [Palestinian] prison, living on the prison grounds, using a disproportionate amount of prison resources, and assaulting the prisoners with impunity. These people are called ‘settlers.’” And these comments are just tip the tip of the iceberg. For much more see “New Sanders Surrogate is a BDS Supporter Who Compared Israel to ISIS,” by Daniel Greenfield, FrontPage Mag., Oct. 10, 2019, and the Canary Mission’s collection of Amer Zahr’s hateful articles and statements.

Sadly, Bernie Sanders has a longstanding pattern of hiring anti-Semitic Israel-haters. In addition to the most recent group:

ZOA is frequently asked, especially by our non-Jewish friends: How can someone, such as Bernie Sanders, turn so horribly against his own people? Harvard psychiatrist Kenneth Levin offered this general explanation of this phenomenon in Dr. Levin’s brilliant book, “The Oslo Syndrome: Delusions of a People Under Siege,”: “Significant numbers of Jews have repeatedly responded to the noxious fumes of chronic assault in the Diaspora and in Israel by deluding themselves into believing they could win peace through embracing the indictments of their enemies and seeking to appease them.”

Psychiatric explanations aside, there is no legitimate excuse for Bernie Sanders to repeatedly embrace leading enemies of Israel and the Jewish people.

ZOA accordingly calls on all Jewish leaders to join ZOA in demanding that Bernie Sanders fire and disassociate himself from his anti-Semitic public endorsers, surrogates and staffers.

We would love to hear from you! Please fill out this form and we will get in touch with you shortly.
Trending Z
Uncategorized October 25, 2019
ZOA Analysis: Most American Rabbis Who Are Boycotting Some Israeli Ministers Are From Extremist Left Wing Groups (J Street; T’ruah; JVP)
Uncategorized October 25, 2019
ZOA: Israel’s Reasonable Judicial Reform Proposals Are Good for Democracy, the Rule of Law and the Economy
Uncategorized October 25, 2019
Israel’s “Right of Return” Grandparent Clause is De-Judaizing the Jewish State – Eliminate It
News October 25, 2019
ZOA is Disappointed, Offended and Frightened by 211 U.S. House Votes Supporting Jew-Hating, Israel-Hating Rep. Ilhan Omar
Center for Law & Justice
We work to educate the American public and Congress about legal issues in order to advance the interests of Israel and the Jewish people.
We assist American victims of terrorism in vindicating their rights under the law, and seek to hold terrorists and sponsors of terrorism accountable for their actions.
We fight anti-Semitism and anti-Israel bias in the media and on college campuses.
We strive to enforce existing law and also to create new law in order to safeguard the rights of the Jewish people in the United States and Israel.
Our Mission
ZOA STATEMENT
The ZOA speaks out for Israel – in reports, newsletters, and other publications. In speeches in synagogues, churches, and community events, in high schools and colleges from coast to coast. In e-mail action alerts. In op-eds and letters to the editor. In radio and television appearances by ZOA leaders. Always on the front lines of pro-Israel activism, ZOA has made its mark.
Related Articles
OP-ED BY: Morton A. Klein, ZOA Jerusalem is Holy to Jews, Not to Muslims