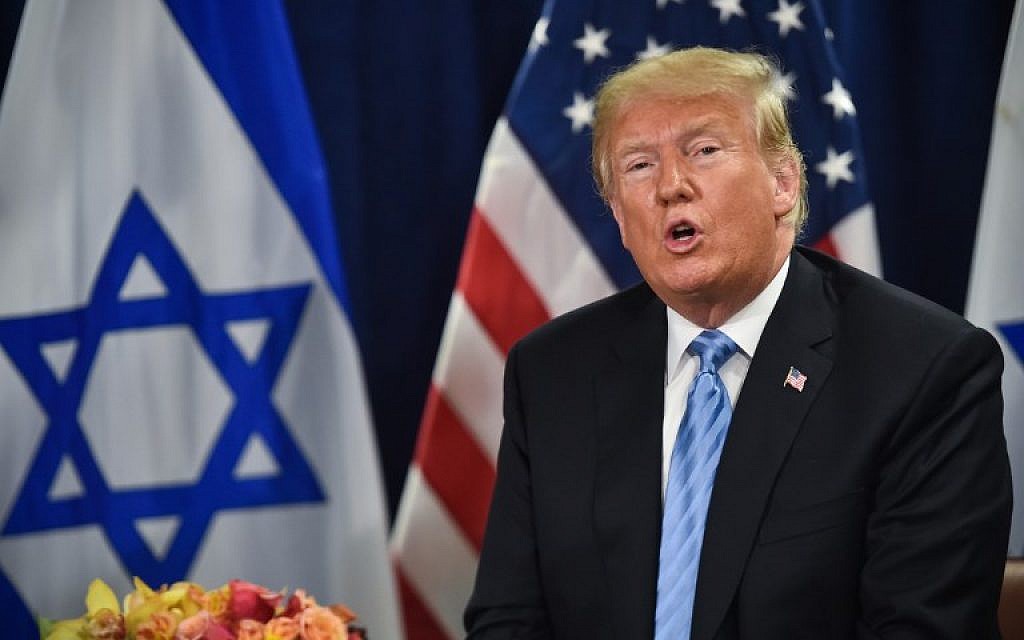 President Donald Trump and Secretary of State Mike Pompeo displayed tremendous courage, integrity and moral and legal clarity yesterday when the administration issued its historic, landmark decision acknowledging the truth that Jewish communities, homes and businesses in Judea/Samaria are not illegal under international law.  If fact, Jewish communities, etc. in Judea/Samaria are unequivocally legal under international law. It is an occasion for Jews and people everywhere who love justice to rejoice and celebrate that the Trump administration reversed the hateful, baseless, Orwellian, Israelophobic, antisemitic policies of the Obama and Carter administrations towards Jews living in the heart of the Jewish homeland.

In fact, U.S. treaty obligations and binding international law, including the Anglo-American Convention of 1924 and the Jewish people’s clause of the UN Charter, confirm the Jewish people’s rights to settle these lands. Jimmy Carter’s and Barrack Hussein Obama’s policies thus violated international law, and it was absolutely correct to end the Carter/Obama positions.

Today, 700,000 Jews live in the heart of the Jewish homeland in Judea/Samaria.

The Trump decision also strikes a blow at the hateful anti-Israel BDS (boycott, divestment and sanctions) movement, which relies on false claims that Jews are “illegal occupiers” of the Jewish homeland.

ZOA is overjoyed by the President’s action.  Also, the two leading parties in Israel – Likud (Netanyahu) and Blue and White (Gantz) both praised the U.S. decision.

But our joy is diminished by the dangerous statements made by some of our co-religionists, including the Union of Reform Judaism and AIPAC leadership:

The URJ was also woefully wrong to assert that “any unilateral move [on settlements] would place serious and critical obstacles to a viable two-state solution, damaging the prospect of renewing the negotiations between Israel and the Palestinian Authority and causing a long-term threat to Israel’s status as a Jewish and democratic state.”

The real “obstacles to peace” are that the Palestinian Authority (PA) continues to pay people to murder Jews; and promotes hatred and violence against Jews in its schools, textbooks, government-controlled media and mosques, and names schools streets, sports teams and children’s camps after Jew killers.  The Palestinian Arabs were offered a state 3 times in the past 19 years, and 7 times in the last 80 years.  Each time, the Palestinian Arabs rejected a state that would end all hostilities and further demands on Israel – because the PA’s real goal is Israel’s destruction.  When the Arabs illegally occupied Judea/Samaria from 1948-1967, they formed no Palestinian state and there was no peace – because the Arabs’ real goal was and still is Israel’s elimination.  Moreover Palestine was never an Arab State. In fact Palestine is a Roman word.

In fact, a so-called “two-state solution” (meaning, the creation of a terrorist Palestinian-Arab-Hamas-Hezbollah-Fatah-Iranian proxy state in Israel’s heartland) is not a “solution.”  It is an existential threat to Israel’s existence.

AIPAC’s statement refusing to support Trumps historic pro-Israel decision yesterday belies AIPAC’s repeated claim that AIPAC supports the policies of Israel’s democratically elected government—since the Israeli government and the major Blue and White Party under Gantz both lauded Trumps decision. In addition, AIPAC supports a so-called “two-state solution” – which the Israeli government does not support.  AIPAC also recently criticized Israel for refusing to admit two antisemitic Congresspersons into Israel. AIPAC also refused to support the Taylor-Force Act for a year until the Act was weakened (The Act cut aid to the Palestinians until they stopped paying Arabs to murder Jews). Why is AIPAC not supporting Israel’s positions as they claim they would?  Has AIPAC become just another leftwing Jewish group?

ZOA accordingly urges all our co-religionists to join us in celebrating the moral and legal landmark position advanced by the Trump administration yesterday.

We would love to hear from you! Please fill out this form and we will get in touch with you shortly.
Trending Z
Uncategorized November 19, 2019
FLASH: ISRAEL-JORDAN PEACE TREATY (1994) GUARANTEES JEWS ACCESS TO THE TEMPLE MOUNT – LET MY PEOPLE PRAY
Uncategorized November 19, 2019
ZOA Analysis: Most American Rabbis Who Are Boycotting Some Israeli Ministers Are From Extremist Left Wing Groups (J Street; T’ruah; JVP)
Uncategorized November 19, 2019
Israel’s “Right of Return” Grandparent Clause is De-Judaizing the Jewish State – Eliminate It
Uncategorized November 19, 2019
Exclusive: ZOA Accuses Ilhan Omar of Hating the U.S. ‘as Much as Israel,’ Lauds Kevin McCarthy for ‘Throwing Her Off the HFAC’
Center for Law & Justice
We work to educate the American public and Congress about legal issues in order to advance the interests of Israel and the Jewish people.
We assist American victims of terrorism in vindicating their rights under the law, and seek to hold terrorists and sponsors of terrorism accountable for their actions.
We fight anti-Semitism and anti-Israel bias in the media and on college campuses.
We strive to enforce existing law and also to create new law in order to safeguard the rights of the Jewish people in the United States and Israel.
Our Mission
ZOA STATEMENT
The ZOA speaks out for Israel – in reports, newsletters, and other publications. In speeches in synagogues, churches, and community events, in high schools and colleges from coast to coast. In e-mail action alerts. In op-eds and letters to the editor. In radio and television appearances by ZOA leaders. Always on the front lines of pro-Israel activism, ZOA has made its mark.
Related Articles
OP-ED BY: ZOA Staff ADL/Foxman’s Proclamation “Case Closed” and AIPAC’s Silence on “Chickens–t” Insult Are Troubling