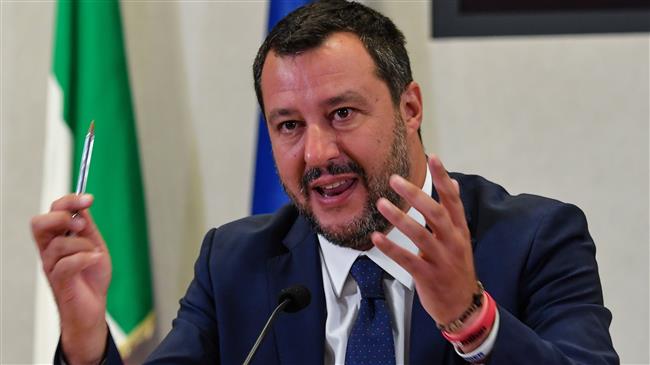 The Zionist Organization of America (ZOA) agrees with former Italian Deputy Prime Minister and Interior Minister (2018-19) and current Italian Senator and Federal Secretary of the Northern League Party, Matteo Salvini, who has observed that astonishingly high levels of anti-Semitism in Muslim societies means that Muslim immigration to Western countries results in increased anti-Semitism in those countries.

In an interview this week, Mr. Salvini said that “some academics and media are mobilized against Israel and they create hate of Israel to justify anti-Semitism.… There is, of course, anti-Semitism of small political minority groups –– Nazis and communists.… But, now the massive presence in Europe of migrants coming from Muslim countries, among whom are many fanatics who are getting the full support of certain intellectuals, is spreading anti-Semitism in Italy as well.”

Repudiating the Left’s argument that the rise of far-right parties explains the spike in anti-Semitism, Mr. Salvini observed, “There is far-right anti-Semitism, and there is a far-left anti-Semitism, which is institutionalized.… Think of Jeremy Corbin, or the left activists in Germany, who didn’t want to be like the Nazis and ended up boycotting Israeli products. I am sure, however, that the high number of Muslims in Europe is the main cause for the current anti-Semitism.”

Senator Salvini noted that his party has shunned the far Right, with whom it has “no relations whatsoever.… Those who believe in Neo-Nazi and Neo-fascist anti-Semitism are our enemies as those who believe in the anti-Semitism of the radical left and radical Islam.… It’s an obligation to fight all those, who claim that the Jews are the Nazis of our time.… I spent nine years at the European Parliament and I can say that the European institutions –– let alone the institutions [of] the UN –– are no friends of Israel.… The European Parliament has today a majority that is not friendly to Israel,” (Thomas D. Williams, ‘Matteo Salvini: Muslim Immigration Is ‘Main Cause’ of Resurgent Anti-Semitism,’ Breitbart, January 19, 2020).

Thus, a 2011 Pew survey found that, in seven predominantly Muslim nations, less than 10% of people had a positive opinion of Jews; indeed, fewer than 5% had positive views in all these countries other than Indonesia. (The only major exception to this state of affairs are the views of Israeli Arabs, where 48% express a positive opinion of Jews, while 49% offer a negative opinion). Whereas 82% of Americans have a favorable view of Jews and 76% of Britons have a positive view of Jews, only 2% of Jordanians and Egyptians, 3% of Lebanese, and 4% of Palestinian Arabs have a favorable view of Jews.

“The tragic but undeniable fact is that, while anti-Semitic attitudes are a minority or fringe position in Western societies, they are the mainstream, dominant view in any Muslim society anyone cares to name.

“For this reason, it is a tragic error to assume that immigrants from all countries are basically the same. The fact is that an immigrant from Pakistan, Turkey, Iraq or Egypt is much more likely to be anti-Semitic than not, something which is simply not the case if one speaks of immigrants from European or South American countries.

“Vetting immigrants for anti-Semitic attitudes should be an integral part of the process of determining whether someone is permitted to be admitted to the U.S. as an immigrant.”

We would love to hear from you! Please fill out this form and we will get in touch with you shortly.
Trending Z
News January 27, 2020
New Biden Nominees Opposed Abraham Accords & Involved in Israeli Election Interference
Uncategorized January 27, 2020
ZOA Letter to DOJ & FBI on New “Mapping Project” Antisemitic Threat by ZOA Pres. Morton Klein, Dir. of Research/Special Projects Liz Berney, Esq., Dir. Center for Law & Justice Susan Tuchman, Esq.
News January 27, 2020
ZOA’s Condemnation of Black Lives Matter Defended by JNS’ Tobin: Jews Supporting BLM Empowered Antisemitism
Op-Ed January 27, 2020
ZOA’s Mort Klein JPost Op-Ed: BDS Mapping Project Targets Every Jew, Including Left Wing, Israelophobic Jews
Center for Law & Justice
We work to educate the American public and Congress about legal issues in order to advance the interests of Israel and the Jewish people.
We assist American victims of terrorism in vindicating their rights under the law, and seek to hold terrorists and sponsors of terrorism accountable for their actions.
We fight anti-Semitism and anti-Israel bias in the media and on college campuses.
We strive to enforce existing law and also to create new law in order to safeguard the rights of the Jewish people in the United States and Israel.
Our Mission
ZOA STATEMENT
The ZOA speaks out for Israel – in reports, newsletters, and other publications. In speeches in synagogues, churches, and community events, in high schools and colleges from coast to coast. In e-mail action alerts. In op-eds and letters to the editor. In radio and television appearances by ZOA leaders. Always on the front lines of pro-Israel activism, ZOA has made its mark.
Related Articles
OP-ED ZOA: Natl. Jewish Democratic Council Should Oppose Hagel Nomination As It Did In 2009