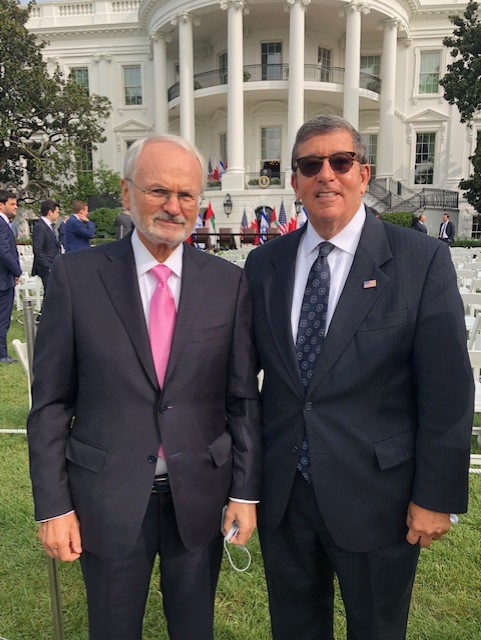 ZOA President Morton A. Klein, ZOA Chair Mark Levenson, Esq., and other ZOA Coalition delegates (including Rabbi Aryeh Spero, Assemblyman Dov Hikind, Nachman Mostofsky, Rabbi Yitzchok Tendler, and Professor Mark Goldfeder) were all honored to attend the signing of the momentous Israel-UAE and Israel-Bahrain peace agreements, at the White House lawn today. The agreements were largely brought about by the efforts of the Trump administration.

These agreements are an important step for bringing peace to the people of Israel, the UAE, Bahrain, and the entire region; will help diminish the impact of the Palestinian Authority and Hamas’ propaganda lies against Israel; will help diminish the impact of the BDS (boycott, divestment & sanctions) movement’s ability to delegitimize Israel; will help establish a united Middle East front against Iranian terrorism and hegemony; and will encourage other nations, such as Oman, Sudan, Morocco, Chad, and possibly even Saudi Arabia, to make peace deals with Israel. President Trump surely deserves a Nobel Peace Prize for brokering these deals.

ZOA is concerned, however, that the UAE Foreign Minister spoke of taking off the table Israeli sovereignty over Jewish communities in historic Jewish lands of Judea/Samaria. We are also concerned that Bahrain’s foreign minister claimed that a Palestinian Arab state is needed. ZOA hopes that the UAE and Bahraini foreign ministers made these statements solely to appease radical elements in Arab world.

The purpose of today’s peace agreements is supposed to be “peace for peace” – to benefit the signing nations’ people and regional stability. A Palestinian Arab state on historic Jewish land would be an Iranian-Hamas proxy terrorist state that undermines peace in the region, and undermines the battle by Israel and moderate Arab nations against Iranian hegemony.

Notably, at the virtual World Likud convention which also took place today, 250 Jewish activists from around the world, including 39 activists from the ZOA Coalition, sent a strong message about the need and right for Israel’s implementation of her sovereignty. Following a pre-recorded video by ZOA Chair Mark Levenson, Esq., emphasizing Israel’s legal, historic, and religious rights to apply sovereignty, the World Likud convention overwhelmingly passed resolutions calling for:  (1) Immediate application of Israel’s lawful, religious, historic sovereignty rights over Judea and Samaria, and opposing the establishment of a Palestinian Arab state – which would be an Iranian-proxy terror state; (2) Ending the use of the misleading term “annexation” because the term “annexation” falsely implies that Judea and Samaria are not our land; and (3) worldwide education regarding Israel’s legal, historic, and religious sovereign rights to Judea and Samaria and all of Israel’s land.

Sending this message was so important that ZOA Coalition members who were on the White House lawn took out their cell phones to vote at the World Likud convention!

We would love to hear from you! Please fill out this form and we will get in touch with you shortly.
Trending Z
News September 15, 2020
ZOA Condemns U.S. State Dept. & U.S. Amb. Nides For Siding with Antisemitic, Discriminatory Palestinian & Hamas Terrorists re: the Temple Mount, Violating Jews’ Religious Freedom
Uncategorized September 15, 2020
FLASH: ISRAEL-JORDAN PEACE TREATY (1994) GUARANTEES JEWS ACCESS TO THE TEMPLE MOUNT – LET MY PEOPLE PRAY
Uncategorized September 15, 2020
ZOA Analysis: Most American Rabbis Who Are Boycotting Some Israeli Ministers Are From Extremist Left Wing Groups (J Street; T’ruah; JVP)
Uncategorized September 15, 2020
Israel’s “Right of Return” Grandparent Clause is De-Judaizing the Jewish State – Eliminate It
Center for Law & Justice
We work to educate the American public and Congress about legal issues in order to advance the interests of Israel and the Jewish people.
We assist American victims of terrorism in vindicating their rights under the law, and seek to hold terrorists and sponsors of terrorism accountable for their actions.
We fight anti-Semitism and anti-Israel bias in the media and on college campuses.
We strive to enforce existing law and also to create new law in order to safeguard the rights of the Jewish people in the United States and Israel.
Our Mission
ZOA STATEMENT
The ZOA speaks out for Israel – in reports, newsletters, and other publications. In speeches in synagogues, churches, and community events, in high schools and colleges from coast to coast. In e-mail action alerts. In op-eds and letters to the editor. In radio and television appearances by ZOA leaders. Always on the front lines of pro-Israel activism, ZOA has made its mark.
Related Articles
OP-ED BY: ZOA Staff ZOA Statement on Proposed Funding Cuts to CUNY