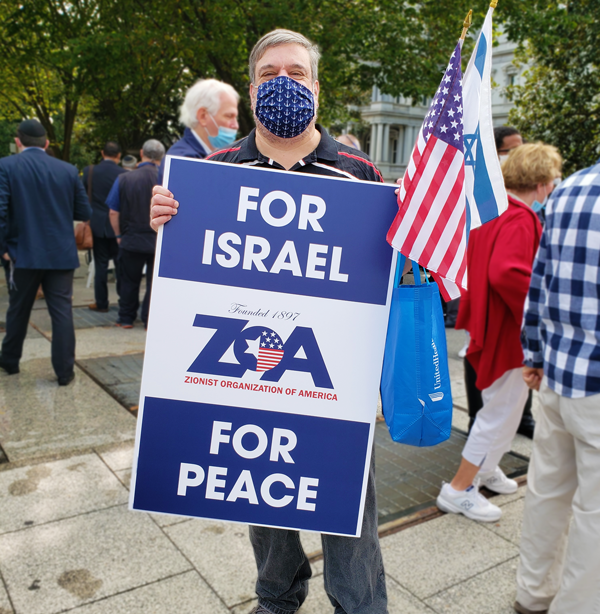 ZOA is proud to have quickly organized a counter-demonstration after it became clear that several groups were targeting the signing ceremony and PM Netanyahu at the White House yesterday for demonstrations opposed to the agreements, to Israel’s existence in general, and in some cases, simply opposing the democratically elected leader of the State of Israel Netanyahu. About 50 people came together on very short notice to wave Israeli and American flags, as well as signs that read “FOR ISRAEL, FOR PEACE” and prominently displayed ZOA’s logo. ZOA President Morton Klein and Chair Mark Levenson were attending the ceremony in person on the White House grounds (see our Press Release), while ZOA Director of Government Relations Dan Pollak helped coordinate the pro-peace ZOA demonstration outside of the White House grounds.

Dan Pollak said: “It was exciting and meaningful to be a witness, even from outside the White House, to this momentous day of peacemaking. The future of diplomacy in the region will forever be informed by what happened today and ZOA is proud to be present to stand up for Israel and for true peace in the region, despite our concerns that sovereignty over 30% of Judea/Samaria was postponed. There were some interesting contrasts in evidence today — Some Israeli citizens traveled from Israel to make clear their opposition to Benjamin Netanyahu, the elected leader of the democratic country, while pro-Palestinian Arab demonstrators displayed hatred towards Israel and Jews in a vicious way, spewing threats and antisemitic propaganda nonsense and lies. When the anti-agreement protesters saw our signs and Israeli flags near the entrance to the White House, it infuriated them and some of them tried to attack us physically. We were grateful for the Secret Service and D.C. police, who kept them away from the ZOA group.”

ZOA National President Morton Klein said: “These agreements are an important step for bringing peace to the people of Israel, the UAE, Bahrain, and the entire region; will help diminish the impact of the Palestinian Authority and Hamas’ propaganda lies against Israel; will help diminish the impact of the BDS (boycott, divestment & sanctions) movement’s ability to delegitimize Israel; will help establish a united Middle East front against Iranian terrorism and hegemony; and will encourage other nations, such as Oman, Sudan, Morocco, Chad, and possibly even Saudi Arabia, to make peace deals with Israel. President Trump surely deserves a Nobel Peace Prize for brokering these deals.

“This is not the time, though to end the ZOA’s advocacy for sovereignty over Judea and Samaria and the Jordan Valley. We are concerned that the comments of the Arab participants in the ceremony reflected so much of the old paradigm, which allowed Palestinian Arab unbridled Jew hatred to be used as an excuse for not moving forward with peace.”

We would love to hear from you! Please fill out this form and we will get in touch with you shortly.
Trending Z
Uncategorized September 16, 2020
FLASH: ISRAEL-JORDAN PEACE TREATY (1994) GUARANTEES JEWS ACCESS TO THE TEMPLE MOUNT – LET MY PEOPLE PRAY
Uncategorized September 16, 2020
ZOA Analysis: Most American Rabbis Who Are Boycotting Some Israeli Ministers Are From Extremist Left Wing Groups (J Street; T’ruah; JVP)
Uncategorized September 16, 2020
Israel’s “Right of Return” Grandparent Clause is De-Judaizing the Jewish State – Eliminate It
Uncategorized September 16, 2020
Exclusive: ZOA Accuses Ilhan Omar of Hating the U.S. ‘as Much as Israel,’ Lauds Kevin McCarthy for ‘Throwing Her Off the HFAC’
Center for Law & Justice
We work to educate the American public and Congress about legal issues in order to advance the interests of Israel and the Jewish people.
We assist American victims of terrorism in vindicating their rights under the law, and seek to hold terrorists and sponsors of terrorism accountable for their actions.
We fight anti-Semitism and anti-Israel bias in the media and on college campuses.
We strive to enforce existing law and also to create new law in order to safeguard the rights of the Jewish people in the United States and Israel.
Our Mission
ZOA STATEMENT
The ZOA speaks out for Israel – in reports, newsletters, and other publications. In speeches in synagogues, churches, and community events, in high schools and colleges from coast to coast. In e-mail action alerts. In op-eds and letters to the editor. In radio and television appearances by ZOA leaders. Always on the front lines of pro-Israel activism, ZOA has made its mark.
Related Articles
OP-ED Fmr. PLO Spokesman Khalidi Repeats Shop-Worn Palestinian Lies In New York Times