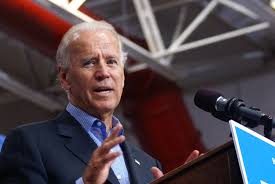 As a Child of Holocaust Survivors born in a displaced persons camp in Germany, I am appalled and deeply offended by former VP Joe Biden again misusing a Nazi analogy on Saturday (September 26): Biden absurdly stated that President Trump is “sort of like [Nazi PR Master] Goebbels. You say the lie long enough, keep repeating it, repeating it, repeating it, it becomes common knowledge.” Biden thus attempted to liken Nobel Peace Prize nominee President Donald Trump to a chief instigator of the mass murder of six million innocent Jews and millions of other innocents. Biden’s offensive, ludicrous analogy diminishes the Nazis’ immorality and the horrors that the Nazis perpetrated. Biden should retract his false analogy and profusely apologize.

Nazi leader Joseph Goebbels led Nazi campaigns to exterminate and persecute Jews, Roma, and others supposed “untermenschen” (racial inferiors), and the Nazis’ “total war” campaign. Goebbels was the “Reich Plenipotentiary for Total War,” “Reich Minister of Propaganda,” and Hitler’s appointed successor: Goebbels served as the Nazi German Chancellor after Hitler committed suicide, until the evil monster Goebbels committed suicide a day later and poisoned his own six children with cyanide.

“It was there [in Charlottesville] on August of 2017 that we saw Klansman and white supremacists and neo-Nazis come out in the open. Their crazed faces, illuminated by torches, veins bulging, and bearing the fangs of racism, chanting the same antisemitic bile heard across Europe in the thirties. And they were met by a courageous group of Americans, and a violent clash ensued, and a brave young woman lost her life. That’s when we heard the words of the president of the United States that stunned the world and shocked the conscience of this nation. He said there were, quote, “Some very fine people on both sides.” Very fine people on both sides? Those words, the president of the United States assigned a moral equivalence between those spreading hate and those with the courage to stand against it. And in that moment, I knew the threat to this nation was unlike any I had ever seen in my lifetime. . . . We are in the battle for the soul of this nation.”

In the very same breath as his “very fine people” statement, President Trump said: “I’m not talking about the neo-Nazis and the white nationalists, because they should be condemned totally.” (See “Breitbart News’ Joel Pollak: The Definitive Takedown of the Charlottesville ‘Very Fine People’ Hoax,” by Robert Kraychik, Breitbart, March 19, 2019, and video link therein to the president’s press conference.)

President Trump also promptly ordered the opening of a top-priority civil rights investigation regarding the murder of Heather Heyer in Charlottesville; vowed to hold those involved fully accountable; made good on that vow; and promptly signed and announced his support of S.J. Res. 49, the Charlottesville Joint Resolution, which specifically “reject[ed] white nationalists, white supremacists, the Ku Klux Klan, neo-Nazis, and other hate groups.” President Trump also again specifically denounced neo-Nazis and other hate groups at Charlottesville, saying:

“Racism is evil. And those who cause violence in its name are criminals and thugs, including the KKK, neo-Nazis, white supremacists, and other hate groups that are repugnant to everything we hold dear as Americans. . . . We will spare no resource in fighting so that every American child can grow up free from violence and fear.”  (“Statement by President Trump,” Aug. 14, 2017.)

President Trump has also repeatedly, specifically condemned and denounced neo-Nazism, the KKK, white supremacists, and antisemitism, as “vile poison” and in other strongest possible terms, on numerous other occasions. See list of President Trump’s strong statements opposing Nazism and white supremacists, at pages 23-24 of my, Morton Klein’s, Written Testimony to Congress’ Judiciary Committee on Hate Crimes and White Nationalism, April 9, 2019.

President Trump also deported the last known Nazi war criminal living in the United States. Previous administrations (including Obama-Biden) failed to act, despite knowing that this Nazi concentration camp guard had been living here for decades.

The Biden campaign’s utterly false attempts to tar and analogize President Trump to Nazis was also copied by the Jewish Democratic Council of America (JDCA)’s just-released vile video ad, which falsely and absurdly and recklessly portrays President Trump as a “hater” endangering the Jews’ future, next to Nazi swastikas and Charlottesville and Holocaust imagery. The ad was retweeted by Democratic operatives such as Halie Soifer (JDCA Exec. Director and Kamala Harris’ former national security adviser). The JDCA also retweeted a post accusing President Trump’s campaign of “similarities to the uprising of Hitler.” Unbelievable!

My father Rabbi Herman Klein, a survivor of the Auschwitz Murder Camp, is surely rolling over in his grave. And my 98-year-old mother, a survivor who is still living, would surely be horrified if I informed her.

Moreover, like the “Boy Who Cried Wolf,” alarmist false accusations of support for Nazis makes it harder to combat real neo-Nazis and other Jew-haters.

ZOA accordingly calls on Joe Biden and the Jewish Democratic Council of America to retract their false statements and ads, and apologize to the President and to the American people and to all holocaust survivors and the Jewish people.

ZOA further urges the Anti-Defamation League (ADL) and American Jewish Committee (AJC) and the Conference of Presidents of Major American Jewish Organizations and Rabbis and Jewish and Christian and Muslim leaders to join ZOA in condemning Biden’s and the JDCA’s horrific, false Nazi analogies and demanding a retraction and apology.

As University of Pennsylvania medical ethicist Arthur Caplan wrote in 2005: “The Nazi analogy is equivalent to dropping a nuclear bomb in ethical battles . . . [T]he cavalier use of the Nazi analogy in an attempt to bolster an argument is unethical. . . . [W]e owe it to those who suffered and died at the hands of the Nazis to insist that those who invoke the Nazi analogy do so with care.” My dear parents from Czechoslovakia and Poland would fervently agree.

We would love to hear from you! Please fill out this form and we will get in touch with you shortly.
Trending Z
News September 29, 2020
ZOA Condemns U.S. State Dept. & U.S. Amb. Nides For Siding with Antisemitic, Discriminatory Palestinian & Hamas Terrorists re: the Temple Mount, Violating Jews’ Religious Freedom
News September 29, 2020
ZOA’s Klein JPost Op-Ed: There is Nothing Extreme About Israel’s New Government
Uncategorized September 29, 2020
FLASH: ISRAEL-JORDAN PEACE TREATY (1994) GUARANTEES JEWS ACCESS TO THE TEMPLE MOUNT – LET MY PEOPLE PRAY
Uncategorized September 29, 2020
ZOA Analysis: Most American Rabbis Who Are Boycotting Some Israeli Ministers Are From Extremist Left Wing Groups (J Street; T’ruah; JVP)
Center for Law & Justice
We work to educate the American public and Congress about legal issues in order to advance the interests of Israel and the Jewish people.
We assist American victims of terrorism in vindicating their rights under the law, and seek to hold terrorists and sponsors of terrorism accountable for their actions.
We fight anti-Semitism and anti-Israel bias in the media and on college campuses.
We strive to enforce existing law and also to create new law in order to safeguard the rights of the Jewish people in the United States and Israel.
Our Mission
ZOA STATEMENT
The ZOA speaks out for Israel – in reports, newsletters, and other publications. In speeches in synagogues, churches, and community events, in high schools and colleges from coast to coast. In e-mail action alerts. In op-eds and letters to the editor. In radio and television appearances by ZOA leaders. Always on the front lines of pro-Israel activism, ZOA has made its mark.
Related Articles
OP-ED Fmr. PLO Spokesman Khalidi Repeats Shop-Worn Palestinian Lies In New York Times