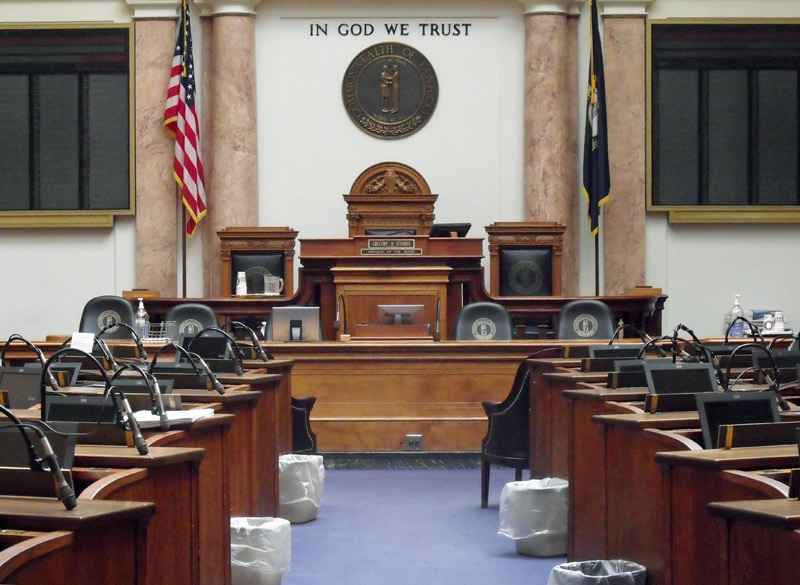 Zionist Organization of America President Morton A. Klein and Chair Mark Levenson, Esq. praise the Kentucky House of Representatives and Senate for passing strong resolutions against antisemitism. We deeply appreciate that they incorporated in the resolutions the International Holocaust Remembrance Alliance’s working definition of antisemitism, as well as language condemning those who attack Jews for supporting Israel or question an American Jew’s patriotism if they also support Israel.

We are especially gratified that the Kentucky lawmakers chose to note in the “Be It Resolved” portion of the resolution that:

“This body rejects the perpetuation of antisemitic stereotypes in the United  States  and  around  the  world,  including  the  pernicious  myth  of  dual  loyalty  and foreign  allegiance,  especially  in  the  context  of  support  for  the  United  States-Israel alliance.”

“This  body  rejects  attempts  to  justify  hatred  or  violent  attacks  as  an acceptable  expression  of  disapproval  or  frustration  over  political  events  in  the  Middle East or elsewhere.”

We are also especially grateful that among the Whereas clauses, there is this language:

“WHEREAS,   accusing   Jews   of   being   more loyal   to   Israel   or   to   the   Jewish community  than  to  the  United  States  constitutes  antisemitism  because  it  suggests  that Jewish  citizens  cannot  be  patriotic  Americans  and  trusted  neighbors,  when  Jews  have loyally  served  our  nation  every  day  since  its  founding,  whether  in  public  or  community life or military service.”

ZOA calls on the legislatures of the 49 other states to adopt similar resolutions that include the IHRA working definition of antisemitism as well as language that affirms that Jewish Americans who are pro-Israel are loyal Americans, and we encourage residents of those states to ask their lawmakers to introduce such legislation.

We would love to hear from you! Please fill out this form and we will get in touch with you shortly.
Trending Z
News March 2, 2021
ZOA Condemns U.S. State Dept. & U.S. Amb. Nides For Siding with Antisemitic, Discriminatory Palestinian & Hamas Terrorists re: the Temple Mount, Violating Jews’ Religious Freedom
Uncategorized March 2, 2021
FLASH: ISRAEL-JORDAN PEACE TREATY (1994) GUARANTEES JEWS ACCESS TO THE TEMPLE MOUNT – LET MY PEOPLE PRAY
Uncategorized March 2, 2021
ZOA Analysis: Most American Rabbis Who Are Boycotting Some Israeli Ministers Are From Extremist Left Wing Groups (J Street; T’ruah; JVP)
Uncategorized March 2, 2021
Israel’s “Right of Return” Grandparent Clause is De-Judaizing the Jewish State – Eliminate It
Center for Law & Justice
We work to educate the American public and Congress about legal issues in order to advance the interests of Israel and the Jewish people.
We assist American victims of terrorism in vindicating their rights under the law, and seek to hold terrorists and sponsors of terrorism accountable for their actions.
We fight anti-Semitism and anti-Israel bias in the media and on college campuses.
We strive to enforce existing law and also to create new law in order to safeguard the rights of the Jewish people in the United States and Israel.
Our Mission
ZOA STATEMENT
The ZOA speaks out for Israel – in reports, newsletters, and other publications. In speeches in synagogues, churches, and community events, in high schools and colleges from coast to coast. In e-mail action alerts. In op-eds and letters to the editor. In radio and television appearances by ZOA leaders. Always on the front lines of pro-Israel activism, ZOA has made its mark.
Related Articles
OP-ED BY: ZOA Staff ZOA Statement on Proposed Funding Cuts to CUNY