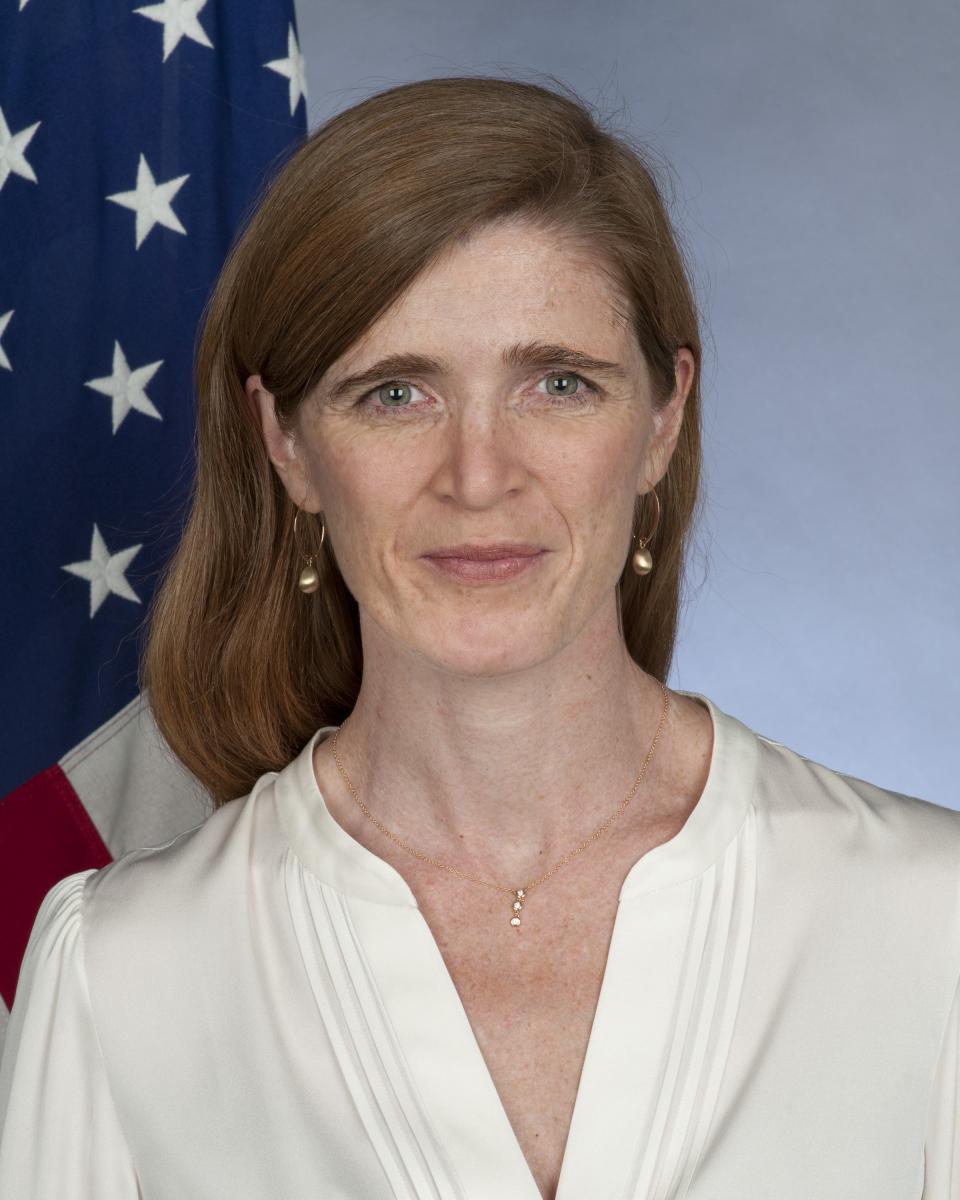 The ZOA strongly opposes the nomination of Samantha Power to head the United States Agency for International Development (USAID) – a position that President Biden elevated to include a seat on the National Security Council (NSC). In 2013 when Power was nominated for U.S. Ambassador to the UN (a position in which Power helped adopt the worst anti-Israel UN Security Council resolution in history), distinguished British journalist and frequent Jerusalem Post contributor Melanie Phillips wrote, “we should all be frightened by Samantha Power. She is the living embodiment of the way in which ‘human rights’ have morphed into their absolute opposite, and instead of providing a protection against tyranny have been turned into the anvil upon which freedom and justice are being smashed.” Power indeed uses the mantra of “human rights” to condemn and damage human rights-loving countries, especially the U.S. and Israel, and to instead support murderous hateful regimes. Confirming Power to head USAID would enable her to spend billions of American tax dollars to put her harmful, hypocritical agenda into effect. ZOA urges the Senate to not confirm Power.

(i)       equated Palestinian Arab terrorists’ stabbing murders of a mother of 6 children, another young woman, and hundreds of other innocent Jews to virtually non-existent “settler violence” – a false and despicable “moral equivalence”;

(iii)     launched into a tirade against Jews living in the Jewish homeland, and demanded a Palestinian Arab state (sure to be an Iran/Hamas terror state); and

(iv)    complained about and falsely blamed Israel for humanitarian conditions in Gaza – and never mentioned that the designated terrorist organization Hamas is solely responsible for these conditions. Power demanded that Israel “open Gaza border crossing points,” while omitting mentioning the hundreds of truckloads of goods that Israel transports to Gaza every single day. In 2015, 139,364 trucks of goods entered Gaza carrying construction materials (‪over 3.7 tons), medical equipment, and other good for the benefit of Gaza’s civilian population.

II. Power Sought to Remove Terror Organization From U.S. Terrorist Lists Which Could Then Receive USAID Funds (This Group Was Linked to Bin Laden & Hamas: Emails obtained by Senator Chuck Grassley (R-IA) show that in 2015, while Power was serving as U.S. Ambassador to the UN, Power tried to delist (remove terror designations of) a terrorist group called the Islamic Relief Agency (“ISRA”), a.k.a. Islamic African Relief Agency (“IARA”), a.k.a Islamic American Relief Agency. ISRA/IARA is tied to Osama Bin Laden, Al-Qaida, Hamas, and related groups. Delisting ISRA/IARA would enable it to obtain U.S. taxpayer money through USAID money and international donor funds. The fact that Power was involved in these efforts to delist a terrorist group raises grave concerns that USAID funds will go to terrorist and terror-tied organizations.

Senator Grassley appropriately demanded that Power provide him with further information about the 2015 emails regarding ISRA’s status and explain “why you would take an interest in advocating on behalf of a foreign sanctioned entity.” The senator asked for this information by March 4. The Washington Beacon reported Power has yet to respond, according to sources familiar with the matter. (“Grassley Grills Biden Nominee Over Push to Lift Sanctions on Group Tied to Terror,” by Adam Kredo, Washington Free Beacon, March 8, 2021; “Obama Administration’s UN Team Sought to Overturn Designation of Bin Laden Charity,” by Clifford Smith, JNS, Mar. 3, 2020.)

The U.S. Treasury’s terrorist designation of ISRA/IARA explains that:

(i)       ISRA/IARA was formerly affiliated with a group co-founded by Osama Bin Laden, involved in discussions to help relocate and find safe harbor for Bin Laden. The group was the precursor to Al-Qaida.

(ii)      “Evidence also shows that as of early 2003, IARA was responsible for moving funds to the Palestinian territories for use in terrorist activities, notably serving as a conduit to Hamas in one Western European country. In part, funds were raised through IARA collection boxes marked “Allah” and “Israel,” signaling the funds would be directed towards attacks against Israelis.”

(iii)     ISRA/IARA was “reportedly linked to the Belgium office of the Al-Aqsa Foundation.” (The U.S. Treasury Department designated Al-Aqsa Int’l Foundation as an additional terror organization linked to funding Hamas.)

III. Power Downplayed Dangerous Iranian Regime & Nuclear Weaponization as a Phony Threat: In a 2008 Time Magazine op-ed, Power condemned Bush administration warnings about dangers from Iran; condemned warnings that military options were on the table regarding Iran; and blamed the U.S., including by calling for high-level negotiations to “diminish perceptions of U.S. arrogance.” (“Rethinking Iran,” by Samantha Power, Time, Jan. 17, 2008).

In the same article, Power also misleadingly wrote that “the [Bush] Administration’s allegations about the advanced state of Iran’s weapons program [were] refuted in December by the National Intelligence Estimate.” (If fact, as IAEA reports and Israel’s trove of Iranian nuclear documents seized from the Tehran confirmed, the National Intelligence Estimate was proven to be wrong; Iran in fact had a robust nuclear weapons program.)

IV. Power Accused U.S. of Crimes and Wrongly Criticized U.S. for Not Subjecting Itself to Politicized ICC Jurisdiction:  In her 2003 New Republic article, Power: (i) accused the U.S. of “an overreliance on power”; (ii) accusingly stated that “the question today is whether the United States is structurally capable of using its tremendous power for the good of others”; (iii) claimed that as a result of U.S. actions, “the United States came to be seen less as it sees itself (the cop protecting the world from rogue nations) than as the very runaway state international law needs to contain”; (iv) complained that “The United States will not subject itself to the jurisdiction of the ICC, so only it will decide whether it has violated the Geneva Conventions”; (v) alleged that “much anti-Americanism derives from the role U.S. political, economic, and military power has played in denying such freedoms to others”; (vi) demanded “overhauling” U.S. foreign policy with “a historical reckoning with crimes committed, sponsored, or permitted by the United States” and by “instituting a doctrine of mea culpa” in which the U.S. emulates Willy Brandt by going down on one knee to ask forgiveness for the Nazis’ crimes; and absurdly argued that the U.S. could turn the ICC into a force for good if the U.S. joins the ICC (and subjects U.S. service members to ICC criminal charges), and that the U.S. should be willing to “giv[e] up a pinch of sovereignty.” (“Force Full,” by Samantha Power, The New Republic, Mar. 3, 2003.)

It is frightening to think that someone with such anti-American views will be in charge of sending billions of U.S. taxpayer dollars to foreign entities.

V. Power Engaged in Massive Unmasking: Another deeply concerning Samantha Power scandal is her innumerable requests to unmask U.S. citizens and Trump campaign workers – despite the fact that she had no business doing this as U.S. Ambassador to the United Nations. (See, e.g., “Samantha Power Unmasked: Why would a diplomat need to know the names of Trump officials?,” Wall Street Journal, May 31, 2017; “Samantha Power appears on Flynn unmasking list seven times, despite testifying she had ‘no recollection’ of doing so,” by Gregg Re, Fox News, May 14, 2020.) “Fox News reported in 2017 that Power was “unmasking” at such a rapid pace . . . that she averaged more than one request for every working day in 2016 – and even sought information in the days leading up to President Trump’s inauguration, according to multiple sources close to the matter.” (Id.)

It is extremely concerning that someone who so egregiously violated the Constitutional privacy rights of American citizens may be elevated to a post on the National Security Council.

VI. Power Lobbied for the Disastrous Libya Intervention: Power also lobbied for the U.S. intervention in Libya, which led to the deaths of four Americans and resulted in Libya becoming a “destabilizing hotbed for terrorists.”

In sum, Samantha Power’s abominable, anti-American, anti-Israel, pro-Iran record clearly disqualifies her from being confirmed to head USAID and to serve on the National Security Council.

We would love to hear from you! Please fill out this form and we will get in touch with you shortly.
Trending Z
News March 19, 2021
New Biden Nominees Opposed Abraham Accords & Involved in Israeli Election Interference
Uncategorized March 19, 2021
ZOA Letter to DOJ & FBI on New “Mapping Project” Antisemitic Threat by ZOA Pres. Morton Klein, Dir. of Research/Special Projects Liz Berney, Esq., Dir. Center for Law & Justice Susan Tuchman, Esq.
News March 19, 2021
ZOA’s Condemnation of Black Lives Matter Defended by JNS’ Tobin: Jews Supporting BLM Empowered Antisemitism
Op-Ed March 19, 2021
ZOA’s Mort Klein JPost Op-Ed: BDS Mapping Project Targets Every Jew, Including Left Wing, Israelophobic Jews
Center for Law & Justice
We work to educate the American public and Congress about legal issues in order to advance the interests of Israel and the Jewish people.
We assist American victims of terrorism in vindicating their rights under the law, and seek to hold terrorists and sponsors of terrorism accountable for their actions.
We fight anti-Semitism and anti-Israel bias in the media and on college campuses.
We strive to enforce existing law and also to create new law in order to safeguard the rights of the Jewish people in the United States and Israel.
Our Mission
ZOA STATEMENT
The ZOA speaks out for Israel – in reports, newsletters, and other publications. In speeches in synagogues, churches, and community events, in high schools and colleges from coast to coast. In e-mail action alerts. In op-eds and letters to the editor. In radio and television appearances by ZOA leaders. Always on the front lines of pro-Israel activism, ZOA has made its mark.
Related Articles
OP-ED BY: ZOA Staff ZOA Statement on Proposed Funding Cuts to CUNY