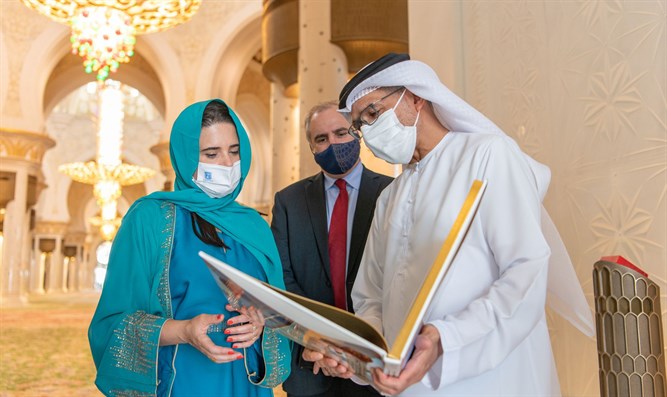 Speaking with the UAE-based news outlet The National, Shaked ruled out talks on Palestinian statehood, both during Prime Minister Naftali Bennett’s term, as well as after Yair Lapid rotates in as premier.

“The Israeli government won’t deliberate on the establishment of a Palestinian state under the present government of Bennett or Lapid when he comes into office under the rotational agreement,” said Shaked.

“There is a consensus among the parties [in the government] not to get involved in the issue, which could cause an internal rift.

“We believe in economic peace as a means of improving Palestinians lives and to create cooperative industrial zones. But not a state with an army, absolutely not.”

Shaked pushed back on the description of Israeli towns in Judea and Samaria as being “illegal settlements,” calling the area “disputed territory”.

“They’re antisemitic by opposing Israel’s right to exist. BDS is the new form of antisemitism.”

This article was originally published in Israel National News and can be viewed here.

We would love to hear from you! Please fill out this form and we will get in touch with you shortly.
Trending Z
News October 6, 2021
New Biden Nominees Opposed Abraham Accords & Involved in Israeli Election Interference
Uncategorized October 6, 2021
ZOA Letter to DOJ & FBI on New “Mapping Project” Antisemitic Threat by ZOA Pres. Morton Klein, Dir. of Research/Special Projects Liz Berney, Esq., Dir. Center for Law & Justice Susan Tuchman, Esq.
Op-Ed October 6, 2021
ZOA’s Mort Klein JPost Op-Ed: BDS Mapping Project Targets Every Jew, Including Left Wing, Israelophobic Jews
News October 6, 2021
U.S. Senators Criticize Tamara Wittes, Biden Nominee’s Anti-Israel Bias ― Jewish Groups are Deafeningly Silent
Center for Law & Justice
We work to educate the American public and Congress about legal issues in order to advance the interests of Israel and the Jewish people.
We assist American victims of terrorism in vindicating their rights under the law, and seek to hold terrorists and sponsors of terrorism accountable for their actions.
We fight anti-Semitism and anti-Israel bias in the media and on college campuses.
We strive to enforce existing law and also to create new law in order to safeguard the rights of the Jewish people in the United States and Israel.
Our Mission
ZOA STATEMENT
The ZOA speaks out for Israel – in reports, newsletters, and other publications. In speeches in synagogues, churches, and community events, in high schools and colleges from coast to coast. In e-mail action alerts. In op-eds and letters to the editor. In radio and television appearances by ZOA leaders. Always on the front lines of pro-Israel activism, ZOA has made its mark.
Related Articles
OP-ED BY: ZOA Staff ZOA Statement on Proposed Funding Cuts to CUNY