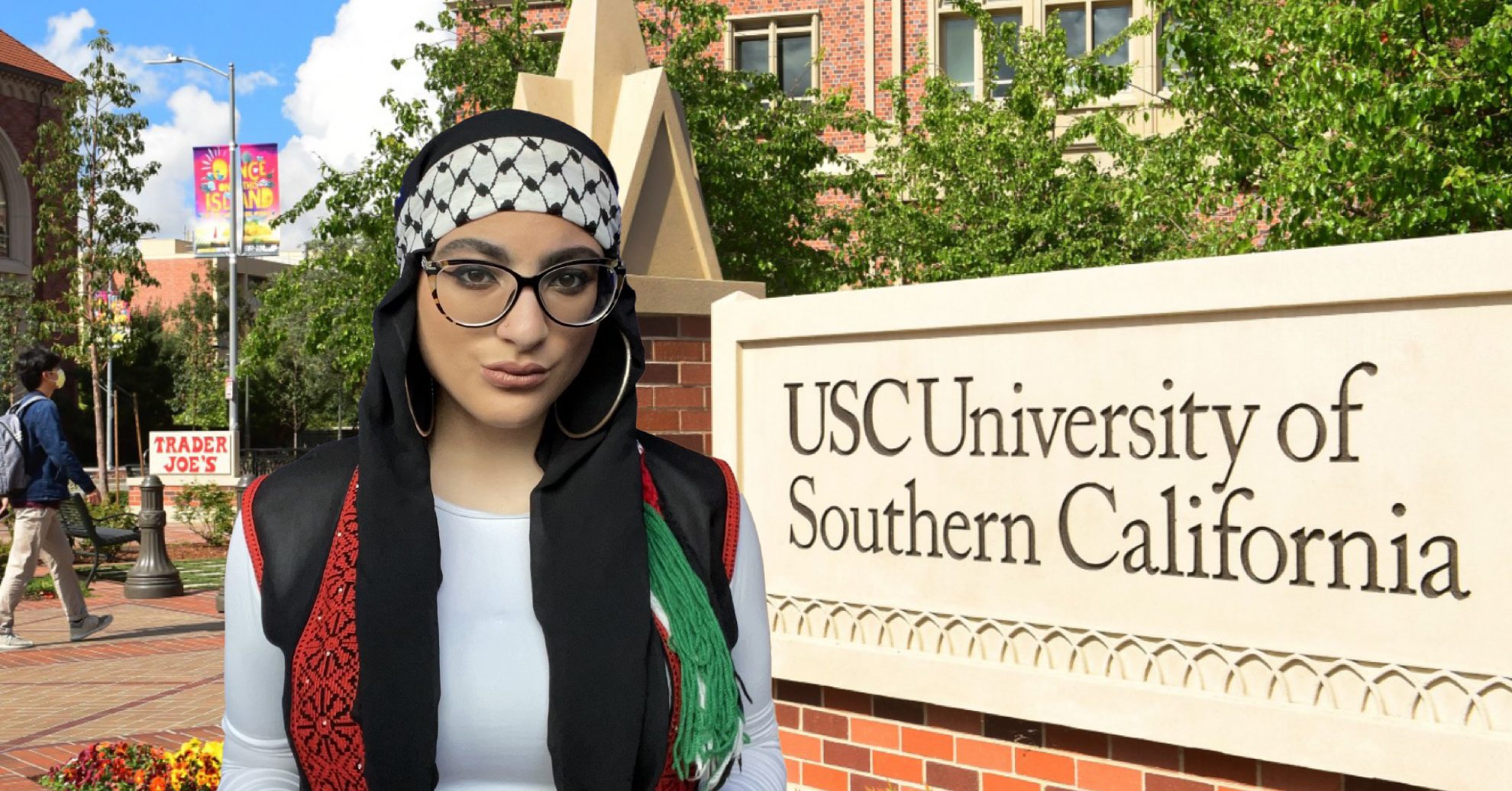 Dear Distinguished Members of the USC Board of Trustees, President Folt and Provost Zukoski:

We write on behalf of the Zionist Organization of America (ZOA), the oldest pro-Israel organization in the U.S., dedicated to fighting antisemitism and anti-Israelism on college campuses. We are horrified that a dangerous, antisemitic student is still enrolled at the University of Southern California (USC), even though she has openly and repeatedly expressed her Jew-hatred in a way that is not only vile but also life-threatening. This student has personally threatened to murder Jews and anyone who supports the Jewish state of Israel. She has publicly praised the murder of Jews. And she has publicly praised Hamas, a U.S.-designated terrorist group whose charter calls for Israel’s destruction and the murder of every Jew.

USC’s leadership admits that it has known about her life-endangering conduct since last summer, yet its response has been slow and virtually meaningless. You must do more to ensure that USC lives up to its legal obligation under Title VI of the Civil Rights Act to provide Jewish and Israeli students with a campus environment that is physically and psychologically safe. If you do not, and students or other members of the USC community are harmed or worse, USC bears responsibility.

Yasmeen Mashayekh is the USC student who has posted many antisemitic statements on social media. They are nothing short of frightening and dangerous to Jews, Israelis and anyone who supports Israel.  They include but are not limited to the following:

It is our understanding that the only concrete “step” that USC has taken in response to the danger that Yasmeen Mashayekh poses is to have her removed from a paid mentoring position in the Viterbi School of Engineering. If that is the case, then the “step” is of virtually no significance. It would be unfathomable for any institution to allow a bigot who threatens and encourages violence to serve as a mentor to others.

USC Should Have Expelled Yasmeen Mashayekh Right Away

For example, at the University of Oklahoma, members of a fraternity were caught on video chanting the “n” word and referring to lynching. The university’s president wasted no time in expelling two leaders of the fraternity, disciplining over 20 other students and shutting down the entire fraternity – even though the entire fraternity had not been involved in the incident – because the “racist and exclusionary chant . . . created a hostile learning environment for others.” The president said, “Our purpose is to learn lessons and be held accountable and then move forward with our lives.”

Also, when a fraternity at UC San Diego held an off-campus party and invited students to dress consistent with Black stereotypes, the chancellor immediately publicly condemned the fraternity’s actions – even though the offending actions occurred off campus. Then, when a noose was found hanging in the library at UC San Diego, the university suspended the student responsible – even though she herself was a minority, she publicly apologized, she explained that the act was a mindless mistake and not racially motivated, and the act was not aimed at individual students or other members of the campus community. Even those steps were not enough for the U.S. Departments of Justice and Education. They investigated complaints of racial harassment at UC San Diego, which resulted in the university entering into a voluntary agreement to undertake systemic changes.

In contrast, USC’s response to Yasmeen Mashayekh’s threats to murder Jews, Israelis and Israel supporters has been slow and virtually meaningless. It was only recently that the USC leadership issued any statements at all, even though they knew about Yasmeen Mashayekh’s conduct for months.

USC Should Have Publicly Condemned Yasmeen Mashayekh and Her Dangerous Antisemitic Threats Immediately, and Committed to a Forceful and Effective Response

On December 13, President Folt tweeted, “I have stated publicly and repeatedly that USC emphatically denounces all forms of antisemitism and anti-Jewish hatred.” She referred readers to USC’s December 3 response to a letter from more than 60 faculty members who expressed their “dismay” over USC leadership’s silence in response to Yasmeen Mashayekh’s conduct. President Folt also tweeted, “I understand the hurtful impact of recent anti-Jewish social media statements to those who are Jewish and to those of us who know how harmful antisemitism is when left unchecked.” Neither of the statements named or condemned the perpetrator of the antisemitism at USC, or informed the USC community about the steps that USC was taking to hold her accountable and safeguard the rights and physical safety of the Jewish, Israeli and pro-Israel community at USC. Indeed, neither of the statements even made it clear that the antisemitism USC was denouncing had occurred on President Folt’s own campus.

The statement that the Chairman of USC’s Board of Trustees finally issued on December 14 was just as weak. Rick J. Caruso stated, in part: “The antisemitic behavior we are witnessing is deeply troubling and runs contrary to the values and safe environment the President and Board of Trustees are sworn to uphold. The Board of Trustees, together with President Folt, unequivocally rejects antisemitism or religious discrimination in any form.” What antisemitism? What happened and where, who perpetrated it, and what was USC going to do about it? Mr. Caruso’s vague statement failed even to acknowledge that the antisemitism occurred on his own campus and that it was shockingly and disgracefully perpetrated by a USC student. He also neglected to say what steps USC was taking in response to punish the perpetrator and protect its Jewish, Israeli and pro-Israel community from physical and emotional harm.

USC’s slow and ineffectual response is particularly troubling because antisemitism at USC is not a new problem. For example, in 2020, a USC student felt compelled – in order to protect her physical safety and her mental health – to resign from her student government position, because she was targeted and harassed for months simply because she was Jewish and proudly expressed her Jewish identity by supporting Israel – as was her right. Other USC students falsely accused her of being racist because she supported Israel. They launched a hostile and destructive social media campaign to “impeach her Zionist a**.” When President Folt issued a statement, she did not even condemn the students who purposefully tormented a student based solely on the student’s expression of her Jewish identity. And President Folt gave no indication that the harassers would be punished for their deplorable conduct.

We urge you to take the following steps without further delay:

In your response to the letter from USC faculty, you described antisemitism as “a global phenomenon which is beyond the control of any one institution.” That is true. But all of us – including USC – must do everything we can to fight this ugly and dangerous bigotry. We urge you to start doing exactly that. If you don’t, and a single member of the USC community is harmed – or worse – the responsibility will be on your shoulders.

View the letter as a pdf here.

We would love to hear from you! Please fill out this form and we will get in touch with you shortly.
Trending Z
News January 3, 2022
At ZOA Gala Secy Pompeo Gave the Greatest, Most Pro-Israel Speech Ever Delivered by a Public Official
News January 3, 2022
Dershowitz in Arutz 7: NYC’s Temple Emanu-El Silences a Pro-Israel Voice & Promotes an Anti-Israel Voice
Uncategorized January 3, 2022
Jewish Press: Has Deborah Lipstadt Undercut Both Herself and Future Antisemitism Envoys?
CLJ January 3, 2022
ZOA Letter to Jason Wingard, President, Temple U, Concerning an Antisemitic Incident
Center for Law & Justice
We work to educate the American public and Congress about legal issues in order to advance the interests of Israel and the Jewish people.
We assist American victims of terrorism in vindicating their rights under the law, and seek to hold terrorists and sponsors of terrorism accountable for their actions.
We fight anti-Semitism and anti-Israel bias in the media and on college campuses.
We strive to enforce existing law and also to create new law in order to safeguard the rights of the Jewish people in the United States and Israel.
Our Mission
ZOA STATEMENT
The ZOA speaks out for Israel – in reports, newsletters, and other publications. In speeches in synagogues, churches, and community events, in high schools and colleges from coast to coast. In e-mail action alerts. In op-eds and letters to the editor. In radio and television appearances by ZOA leaders. Always on the front lines of pro-Israel activism, ZOA has made its mark.
Related Articles
OP-ED Action Alert: Call Your Representative and Urge Them To Remove Anti-Semitic Omar from the House Foreign Affairs Committee