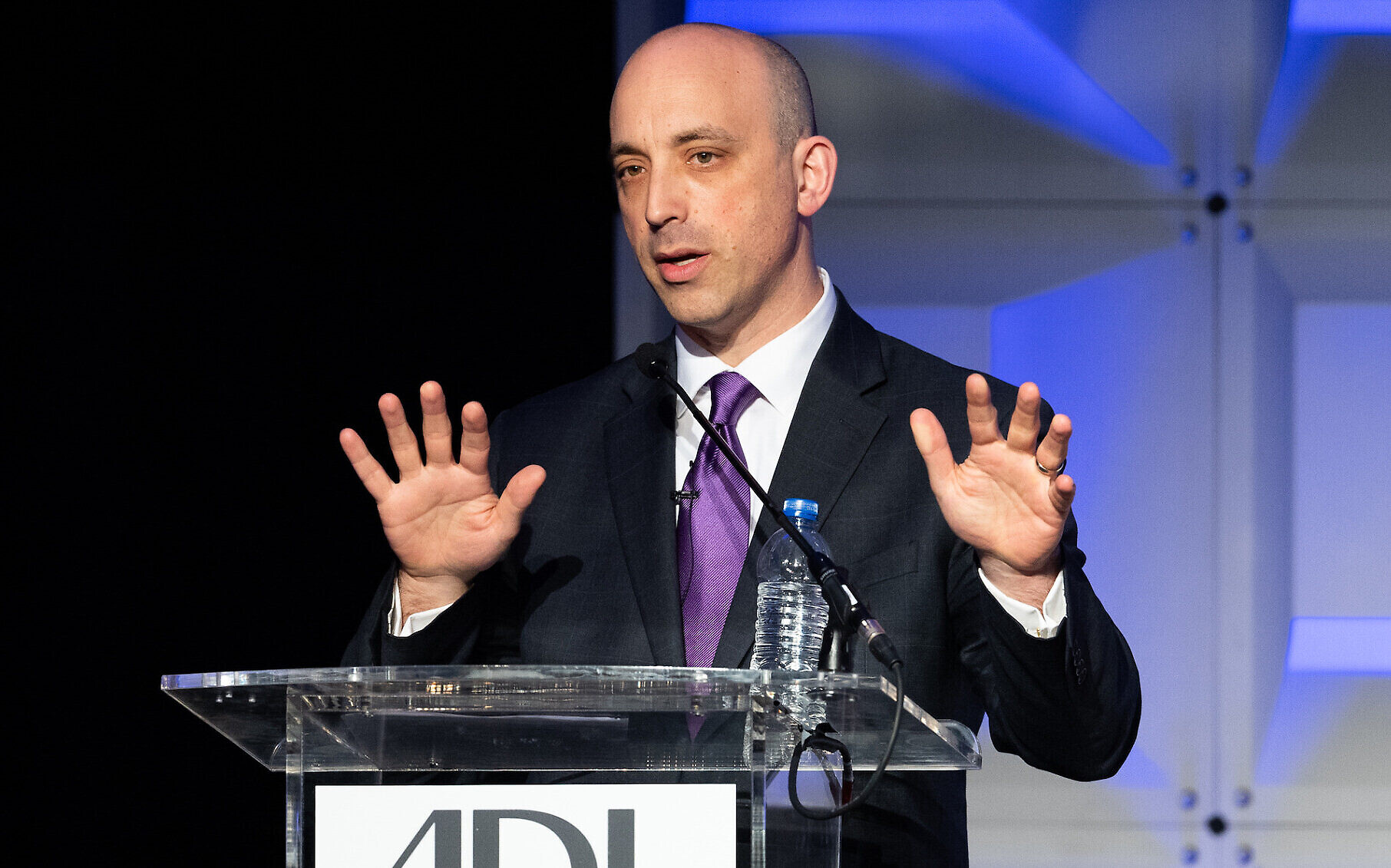 During a recent CNN segment discussing Whoopi Goldberg’s temporary suspension from The View, Anti-Defamation League (ADL) CEO Jonathan Greenblatt said that Whoopi should not be canceled, and falsely and hypocritically stated, “I don’t believe in cancel culture.” In fact, when it serves his left wing agenda, Jonathan Greenblatt avidly, though selectively, promotes the fascism of the “cancel culture.” Greenblatt frequently calls for canceling people and groups that he opposes. We at ZOA, other pro-Israel groups, conservatives, media personalities and politicians, as well as many others, are victims of ADL’s and Greenblatt’s attempts to cancel them. For instance:

Also, in October 2021, Greenblatt sent a letter to Fox News insisting that Fox has a “moral responsibility” to not air (cancel) Tucker Carlson’s program about January 6th, and emphasized: “Freedom of speech is not freedom of reach.”

In January 2021, ADL and ADL CEO Greenblatt called for Republic/Conservative President Trump to be removed from office, and “called on all social media platforms to #BanTrumpSaveDemocracy and permanently remove him from their services . . . Brands and companies should pull back on advertising on these social media networks, like Facebook and Twitter, until Trump is entirely removed from these platforms.”

ZOA (and others) have correctly criticized some of ADL’s and Jonathan Greenblatt’s many harmful positions, including ADL’s lobbying against anti-BDS laws; falsely saying that BDS is not always antisemitic (despite the fact that BDS boycotts and targets Jews); defending Israel-bashing phony “human rights” organizations including Amnesty International; opposing and smearing pro-Israel government appointments including Mike Pompeo, Fred Fleitz and others; falsely blaming “Jewish nationalists” for “exacerbating tensions” when Arabs attacked hundreds of innocent Jews in Israel and burned down Jewish homes and synagogues; praising antisemite Ilhan Omar as having “commitment to a more just world”; and much, much more.

Greenblatt responded to our valid criticisms by attempting to silence us.

In May 2016, during a recess at a United Nations program at which Jonathan Greenblatt and ZOA official Liz Berney, Esq. were both speakers, Greenblatt suddenly grabbed and restrained Ms. Berney, and kept pushing Ms. Berney down a long hallway, while continually screaming at her that the “real enemies” were various Arab governments, and that ZOA should never criticize ADL. (That’s legally an assault.) ZOA promptly demanded that Greenblatt apologize to Ms. Berney, which Greenblatt still has never done.

Also, certain prominent supporters of ZOA informed us that Greenblatt called them, made false disparaging statements about ZOA, and urged them to cancel their relationship with ZOA and support ADL instead.

ADL’s report entitled, “Mainstreaming Hate: The Anti-Immigrant Movement in the U.S.,” calls for canceling the speech of groups and individuals concerned about unvetted and open immigration (e.g., the Federation for Immigrant Reform (FAIR) and the Center for Immigration Studies (CIS)). ADL paints these Conservative groups as extremists and bigots, and condemns their use of social media to speak about gang members entering the U.S., etc. ADL’s report then insists that tech companies must “creat[e] strong and robust prohibitions on such extremist content.”

More Hypocrisy: It was thus hypocritical for Greenblatt to claim that he opposes cancel culture, when Greenblatt opposed canceling liberal Whoopi Goldberg after her extraordinarily insensitive and false comments on the Holocaust. But Greenblatt’s recent display of hypocrisy was nothing new. While ADL and Jonathan Greenblatt promote cancel culture against certain conservative people and groups they oppose, they’ve acted very differently towards Islamists, left wing extremists, and others on the left.

For instance, Greenblatt and ADL made no effort to cancel Jew-hater, left-winger Linda Sarsour from giving the commencement address at the City University of New York’s School of Public Health. Among many other horrors, Sarsour called throwing rocks at Israelis the “definition of courage”; tweeted, “nothing is creepier than Zionism”; declared that she was “honored and privileged” to stand with PFLP murderer-of-Jewish-students Rasmea Odeh; and praised the Intifada terror wars ‑ in which Palestinian Arab terrorists murdered and maimed thousands of innocent Israelis ‑ as “invaluable on many fronts.” Canceling Sarsour’s commencement address would thus have been the appropriate thing to do. But instead, Greenblatt supported Sarsour’s right to give the commencement address, and opposed canceling her. Greenblatt said: “Despite our deep opposition to Sarsour’s views on Israel, we believe that she has a First Amendment right to offer those views.”

ADL/Greenblatt similarly made no effort to cancel, and instead quickly excused liberal Democrat Congressman Hank Johnson (D-GA), when Johnson called Jews living in Judea and Samaria “termites.” ADL failed to even condemn Hank Johnson’s other egregious anti-Israel statements or the fact that Johnson made his comments at a forum of the main antisemitic BDS organization in the United States. (See “ZOA Criticizes ADL for Accepting Cong. Johnson’s Phony Apology for Calling Jews ‘Termites’.”)

We would love to hear from you! Please fill out this form and we will get in touch with you shortly.
Trending Z
Uncategorized February 16, 2022
FLASH: ISRAEL-JORDAN PEACE TREATY (1994) GUARANTEES JEWS ACCESS TO THE TEMPLE MOUNT – LET MY PEOPLE PRAY
Uncategorized February 16, 2022
ZOA Analysis: Most American Rabbis Who Are Boycotting Some Israeli Ministers Are From Extremist Left Wing Groups (J Street; T’ruah; JVP)
Uncategorized February 16, 2022
Israel’s “Right of Return” Grandparent Clause is De-Judaizing the Jewish State – Eliminate It
Uncategorized February 16, 2022
Exclusive: ZOA Accuses Ilhan Omar of Hating the U.S. ‘as Much as Israel,’ Lauds Kevin McCarthy for ‘Throwing Her Off the HFAC’
Center for Law & Justice
We work to educate the American public and Congress about legal issues in order to advance the interests of Israel and the Jewish people.
We assist American victims of terrorism in vindicating their rights under the law, and seek to hold terrorists and sponsors of terrorism accountable for their actions.
We fight anti-Semitism and anti-Israel bias in the media and on college campuses.
We strive to enforce existing law and also to create new law in order to safeguard the rights of the Jewish people in the United States and Israel.
Our Mission
ZOA STATEMENT
The ZOA speaks out for Israel – in reports, newsletters, and other publications. In speeches in synagogues, churches, and community events, in high schools and colleges from coast to coast. In e-mail action alerts. In op-eds and letters to the editor. In radio and television appearances by ZOA leaders. Always on the front lines of pro-Israel activism, ZOA has made its mark.
Related Articles
OP-ED BY: ZOA Staff ZOA Statement on Proposed Funding Cuts to CUNY