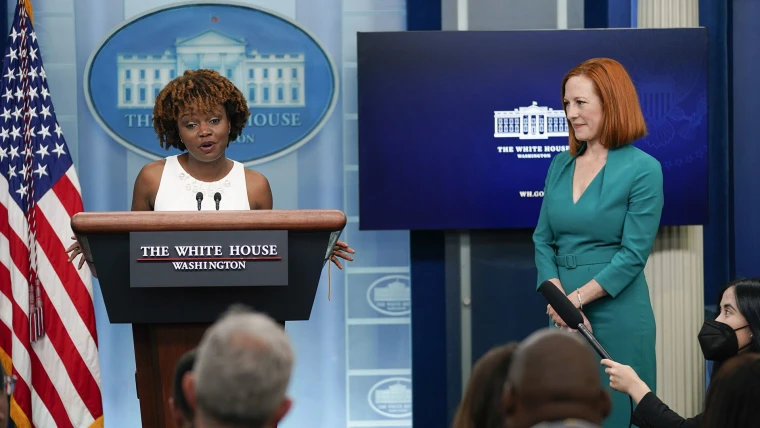 It is deeply disturbing that President Biden has hired yet another Israel-hater in his Administration, choosing Karine Jean-Pierre to serve as White House press secretary after Jen Psaki leaves next week. Virtually every Biden appointment that affects Israel is someone hostile to Israel. In an era of a frightening surge in irrational hatred and attacks against Jews and Israel, Biden’s horrific appointment will inspire more antisemitism, Israel-bashing and violence against Jews. Why are the other Jewish leaders and groups displaying a deafening silence on this frightening antisemitic appointment, as they have on Biden’s endless group of appointments hostile to Israel?

Jean-Pierre’s extreme record of antisemitic, Israel-hating and America-harming activism includes: falsely and absurdly accusing opponents of the disastrous Iran deal of supporting anti-Muslim racism; falsely condemning Israel for defending her citizens from an invasion of murderous Hamas and PIJ terrorists, by promoting a blood libel that “Israel may have committed war crimes in its attacks on Gazan protesters”; serving as spokesperson and senior advisor for far-left, Israel-boycotting, George Soros-supported Moveon.org; bragging in a Newsweek op-ed about helping to orchestrate the Democratic presidential candidates’ boycott of the 2020 AIPAC national policy convention (despite AIPAC’s left-leaning views on Israel’s rightful sovereignty in Judea/Samaria); falsely accusing AIPAC of “trafficking in anti-Muslim and anti-Arab rhetoric while lifting up Islamophobic voices and attitudes”; and condemning speakers who correctly criticize the antisemitic Israelophobic “Squad” (Ilhan Omar, Rashida Tlaib, AOC, etc.).

Biden’s elevation of Karine Jean-Pierre to the top press secretary spot now demonstrates a total disregard for Jewish Americans and all Americans concerned about the safety of America and Israel and the dangers of Iran.

“As a child of Holocaust survivors and as an American Jew, I am appalled and frightened that Biden has chosen Ms. Jean-Pierre, who has shown essentially antisemitic hostility toward Israel and is willing to lie about and vilify Israel and Jews to promote her ugly Israelophobic agenda. Americans should be deeply concerned that this outrageous, incomprehensible anti-Israel, pro-terrorist and pro-Iran appointment indicates the dangerous direction the Biden administration is going to take against America’s greatest ally Israel and U.S.-Israel relations.” (Also see Mr. Klein’s and other Jewish leaders’ comments condemning the appointment in “Biden Taps Anti-Israel Activist, CNN Spouse as White House Press Sec,” The Free Beacon, May 5, 2022.)

In addition, Karine Jean-Pierre is married to CNN national correspondent and anchor Suzanne Malveaux, raising serious questions about the ethical impropriety of placing Jean-Pierre in the press secretary post. (This compounds other ethical issues regarding a CNN-Biden administration relationship. U.S. Ambassador to Israel Thomas Nides – who reprehensibly attacks Jews for building homes in the eternal, legal Jewish homelands of Jerusalem, Judea and Samaria – is married to CNN’s president of news gathering Virginia Moseley.)

We would love to hear from you! Please fill out this form and we will get in touch with you shortly.
Trending Z
News May 6, 2022
ZOA Condemns U.S. State Dept. & U.S. Amb. Nides For Siding with Antisemitic, Discriminatory Palestinian & Hamas Terrorists re: the Temple Mount, Violating Jews’ Religious Freedom
News May 6, 2022
ZOA’s Klein JPost Op-Ed: There is Nothing Extreme About Israel’s New Government
Uncategorized May 6, 2022
FLASH: ISRAEL-JORDAN PEACE TREATY (1994) GUARANTEES JEWS ACCESS TO THE TEMPLE MOUNT – LET MY PEOPLE PRAY
Uncategorized May 6, 2022
ZOA Analysis: Most American Rabbis Who Are Boycotting Some Israeli Ministers Are From Extremist Left Wing Groups (J Street; T’ruah; JVP)
Center for Law & Justice
We work to educate the American public and Congress about legal issues in order to advance the interests of Israel and the Jewish people.
We assist American victims of terrorism in vindicating their rights under the law, and seek to hold terrorists and sponsors of terrorism accountable for their actions.
We fight anti-Semitism and anti-Israel bias in the media and on college campuses.
We strive to enforce existing law and also to create new law in order to safeguard the rights of the Jewish people in the United States and Israel.
Our Mission
ZOA STATEMENT
The ZOA speaks out for Israel – in reports, newsletters, and other publications. In speeches in synagogues, churches, and community events, in high schools and colleges from coast to coast. In e-mail action alerts. In op-eds and letters to the editor. In radio and television appearances by ZOA leaders. Always on the front lines of pro-Israel activism, ZOA has made its mark.
Related Articles
OP-ED BY: Jeff Daube, ZOA Israel Director and Legal Grounds Co-Chair Co-Chair of Group Promoting Legality of Settlements, ZOA’s Daube, Urges Scholar Debate with EU

In response to statements made by the European Union’s ambassador to Israel, Lars Faaborg-Andersen, arguing in favor of an EU policy framework premised on “West Bank settlements” being “illegal under international law,” the Legal Grounds Campaign has called on him to publicly debate Professor Eugene Kontorovich, a renowned expert on international law at Northwestern University and senior legal think tank fellow […]