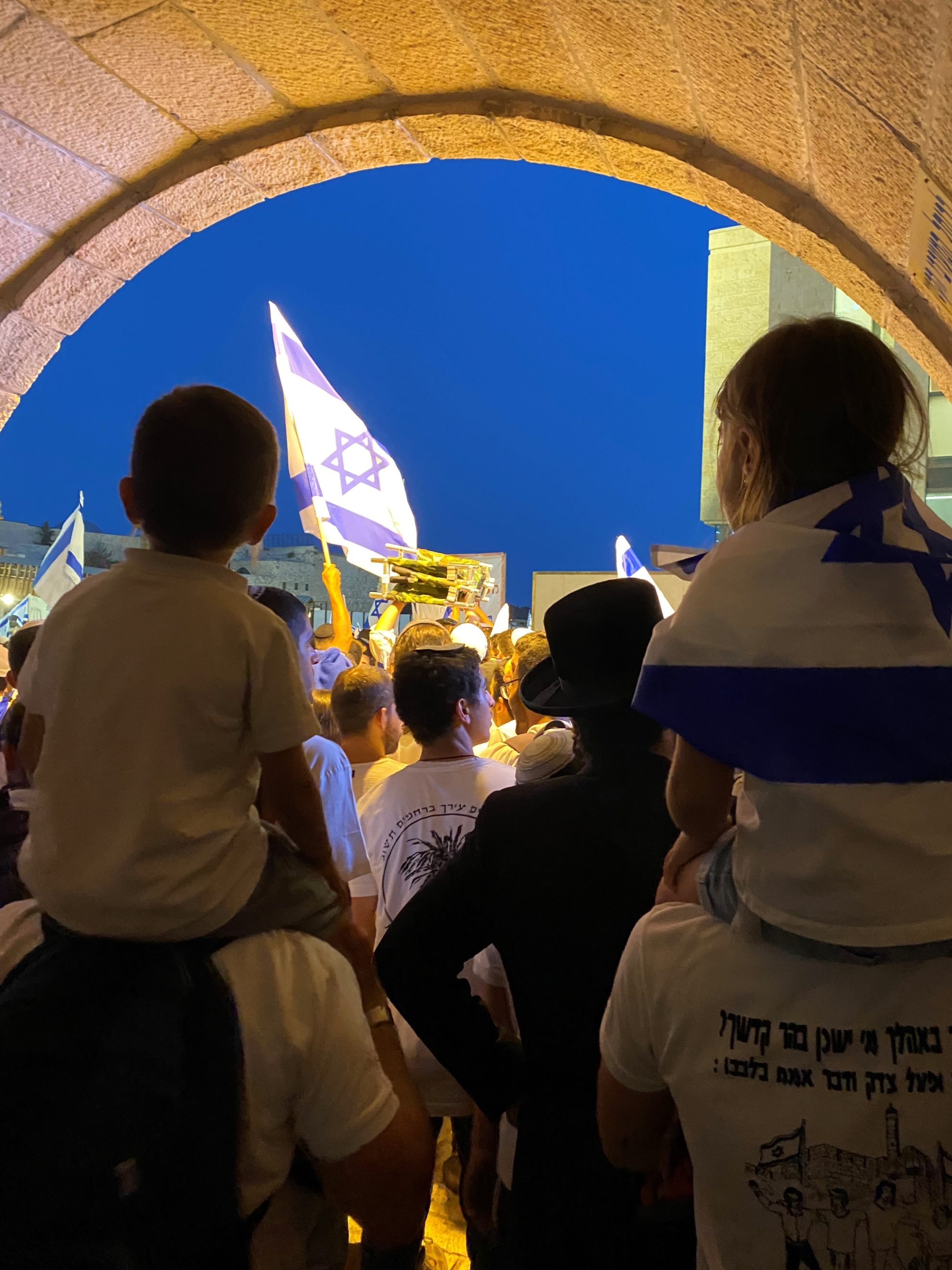 Unfortunately, the anti-Israel media and hostile-to-Israel groups turn every innocent, happy Jewish celebration into an occasion to defame Jews and the Jewish state. The hostile media and groups falsely portrayed the Jerusalem Day flag march, and the beautiful, peaceful Jewish families and children participating in the flag march, as a bunch of “violent” religious Jews “rampaging” through “Arab” Jerusalem. In fact, Jerusalem was the capital of Jewish kingdoms since 1,600 years before Islam was even born. And every census, from the first census in the 1840s onwards, has documented that Jews were and are the largest religious group in Jerusalem.

“Taking part in the Jerusalem Day March was one of the most amazing experiences of my life. Tens of thousands of men, women, teenagers and children were dancing and singing in pure joy and waving Israeli flags. The Jewish people are alive and well in our eternal and undivided capital Jerusalem. I was very impressed by how peaceful the whole march was despite the large number of participants walking through the narrow streets of the Old City. I also saw children and babies in strollers and on their parents’ shoulders. I did not observe any act of violence during over three hours of participation in the March.”

ZOA Co-Vice Chairman of the Board Dr. Paul Tartell recounted:

“I’m distressed about some flagrantly false, fabricated media accounts maligning the peaceful, Jerusalem Day flag march. I was there from beginning to end, from the Mamilla Hotel, to the Damascus Gate, through the Old City, to the packed Kotel Plaza. The attendees (perhaps 50,000 men, women, children and babies) were peaceful, orderly and respectful. No participants were unruly or violent: Participants just marched in the parade, carrying babies and hoisting toddlers on their shoulders, while singing Hatikva and other Israeli songs along the way.

“There were an enormous number of people, a melting pot of observant and secular; Asian, Caucasian and Jews of color, all just expressing their pride in their Jewish and Jerusalemite heritage. This parade was like every other “pride parade” (such as the LGBT, Puerto Rican, Italian-American, and St. Patrick’s Day parades), but with one difference: Those other groups are not maligned for freely expressing their pride in their heritage, but our group was falsely castigated from the get-go. The Jerusalem Day flag march was a friendly, celebratory, peaceful model of civility and respect — not a protest, not a mob, not a provocation, and not a riot.”

“My wife, Michelle, and I, joyfully marched for hours last week with tens of thousands of Israelis through the streets of Jerusalem. We peacefully walked through the Damascus Gate into the Old City, waving Israeli flags and singing songs. The police did not allow us to go through other gates into the Old City on the way to the Kotel. Some people made it to the Temple Mount and were arrested for praying there. We don’t understand why we can’t pray there, on our holiest site.”

“As an American Catholic visiting Israel for the first time, I was very happy that my husband and I participated in the Jerusalem Day March through the Damascus gate. We spent several hours with a crowd of tens of thousands of peaceful Israelis slowly making our way through the gate. The crowd was filled with young people, families young and old, even babies in strollers! We marveled at the enthusiasm of the crowd. We witnessed a committed, respectful people. I heard no racial taunting and saw no physical confrontation. What I did witness was a passionate citizenry living the dream of a democracy in the Middle East. This should be embraced worldwide.”

Note: Paul Tartell took the enclosed picture of the Jerusalem Day parade as he passed under an arch to enter the Kotel Plaza. As the picture shows, it was too crowded there to push children in their strollers, so parents carried their young children on their shoulders, and collapsed and held their strollers overhead.

We would love to hear from you! Please fill out this form and we will get in touch with you shortly.
Trending Z
News June 9, 2022
ZOA Deplores that Pres. Trump Dined with Jew-Haters Kanye West & Nick Fuentes, and Demands he Condemn Them
Uncategorized June 9, 2022
ZOA Honors Trump With Rarely Given Herzl Award for His Great Pro-Israel Work – Joins Ranks of Balfour, Truman, Begin, Meir, Ben-Gurion
News June 9, 2022
ZOA Responds to Questions About Pres. Trump, Kanye West, Fuentes, etc. Issue
Uncategorized June 9, 2022
Zionist Organization of America Honors Donald Trump for Support for Israel, Jewish Community
Center for Law & Justice
We work to educate the American public and Congress about legal issues in order to advance the interests of Israel and the Jewish people.
We assist American victims of terrorism in vindicating their rights under the law, and seek to hold terrorists and sponsors of terrorism accountable for their actions.
We fight anti-Semitism and anti-Israel bias in the media and on college campuses.
We strive to enforce existing law and also to create new law in order to safeguard the rights of the Jewish people in the United States and Israel.
Our Mission
ZOA STATEMENT
The ZOA speaks out for Israel – in reports, newsletters, and other publications. In speeches in synagogues, churches, and community events, in high schools and colleges from coast to coast. In e-mail action alerts. In op-eds and letters to the editor. In radio and television appearances by ZOA leaders. Always on the front lines of pro-Israel activism, ZOA has made its mark.
Related Articles
OP-ED BY: Morton A. Klein Israeli Defense Min. Ya’alon Says, Peace Impossible While Palestinian Children Educated To Murder Jews/Reject Israel