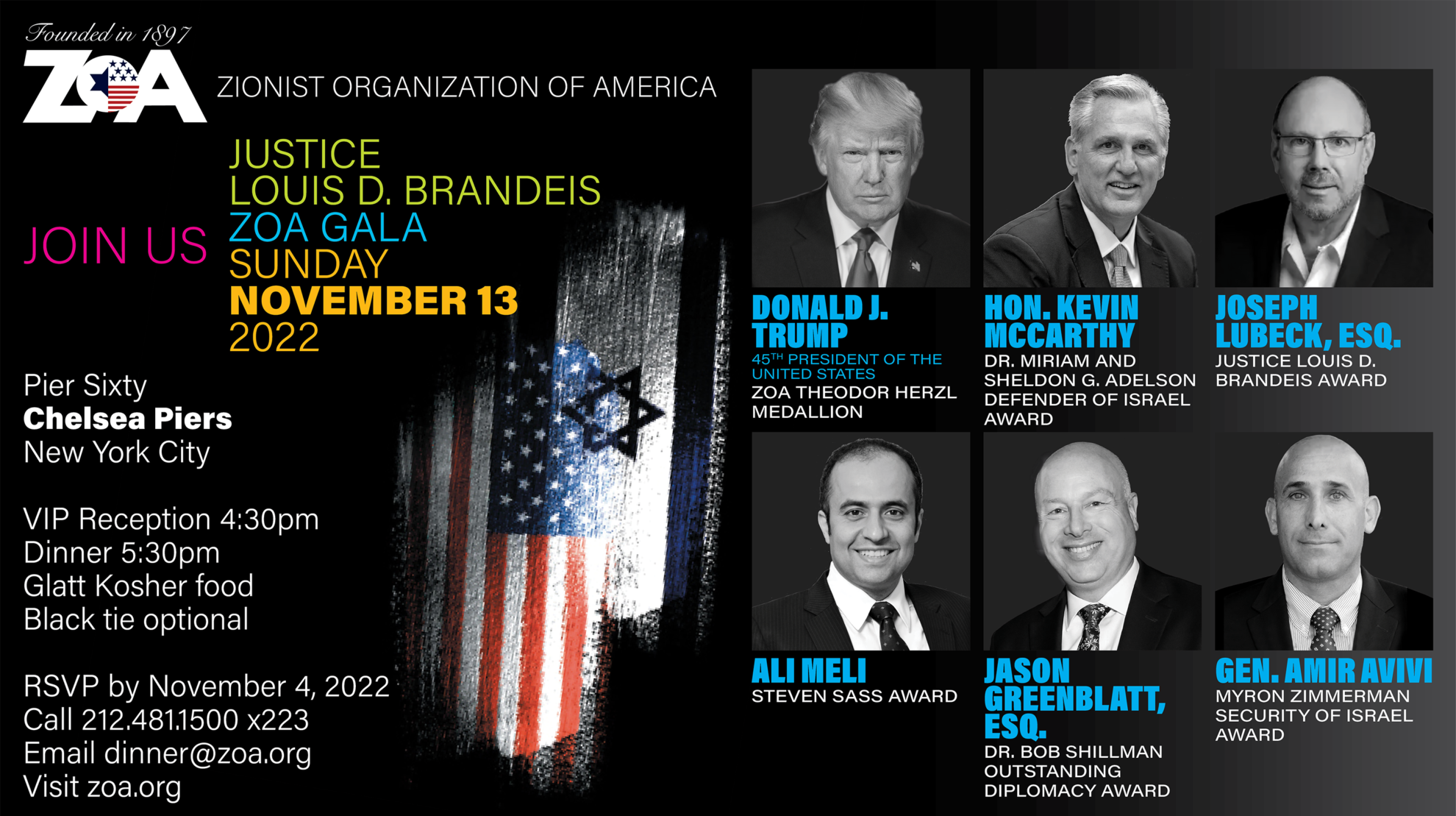 (OCTOBER 18, 2022 / ISRAEL HAYOM) The response to the former U.S. president’s Truth Social post has been nothing short of a hysterical – purposeful – misreading of his words, which were neither threatening nor antisemitic.

The latest brouhaha surrounding former U.S. President Donald Trump pertains to comments he posted on Sunday about – and directed to – American Jews.

“No president has done more for Israel than I have,” he wrote on his platform, Truth Social. “Somewhat surprisingly, however, our wonderful Evangelicals are far more appreciative of this than the people of the Jewish faith, especially those living in the U.S.”

All true, other than the “surprisingly” part. The majority of Jews in the United States wouldn’t support a Republican if their lives, or Israel’s, depended on it. A befitting quip that circulated in Jerusalem ahead of the 2012 election was that if then-President Barack Obama were to nuke Tel Aviv, the Jewish vote for him might drop to 75%.

Trump continued, “Those living in Israel, though, are a different story; highest approval rating in the world. Could easily be PM!”

Again, though characteristically self-congratulatory, what he said is accurate. During his tenure, many adoring Israelis joked about wanting to elect him to the premiership. And with good reason.

He canceled the Joint Comprehensive Plan of Action, the nuclear deal with Iran. He moved the U.S. embassy from Tel Aviv to Jerusalem, which he recognized as Israel’s capital. He ceased funding for the terrorist-supporting UNRWA. He shuttered the PLO mission in Washington. He recognized Israeli sovereignty over the Golan Heights. His State Department removed the word “occupied” from references to Judea and Samaria (the West Bank). He designated Iran’s Islamic Revolutionary Guard Corps a terrorist organization. And he brokered the historic Abraham Accords.

Still, his political and personal foes were furious that he dared to take credit for being the best friend that Israel ever had in the White House. What really got their bilious juices flowing was his warning that “U.S. Jews have to get their act together and appreciate what they have in Israel, before it is too late!”

The response has been nothing short of hysterical, and not in the funny sense.

“We don’t need the former president, who curries favor with extremists and antisemites, to lecture us about the U.S.-Israel relationship,” tweeted Anti-Defamation League CEO Jonathan Greenblatt. “It is not about a quid pro quo; it rests on shared values and security interests. This ‘Jewsplaining’ is insulting and disgusting.”

Greenblatt is actually the one who has no business talking about “shared values” with Israel, whose harshest critics he regularly defends. It is he who could use a hefty dose of “Jewsplaining,” to remind him of what his role is supposed to entail.

The Jewish Democratic Council of America spewed equally vile vitriol. “More unabashed anti-Semitism from GOP leader Donald Trump,” the group tweeted. “His threat to Jewish Americans and his continued use of the antisemitic dual loyalty trope fuels hatred against Jews. We will not be threatened by Donald Trump and Jewish Americans will reject GOP bigotry this November.”

This is particularly worthy of note in its idiocy. Trump issued no “threat,” and he certainly wasn’t invoking the “dual loyalty trope.”

On the contrary, he was calling on Jews to be more, not less, invested in Israel’s future and well-being. And he was warning that failure in this regard would have negative consequences for the Jewish state. What about this is wrong, let alone antisemitic? The answer is: nothing.

“Donald Trump’s comments were antisemitic, as you all know, and insulting both to Jews and to our Israeli allies,” she told reporters on Monday. “But let’s be clear, for years, for years now, Donald Trump has aligned with extremist and antisemitic figures. … We need to root out anti-Semitism everywhere it rears its ugly head. We need to call this out. With respect to Israel, our relationship is ironclad and it’s rooted in shared values and interests. Donald Trump clearly doesn’t understand that either.”

Really? Maybe she ought to tell her boss to “root it out” of the Democratic Party and its backers in academia, where it’s been “rearing its ugly head” with a vengeance.

Perhaps, as well, she might want to review the definition of “ironclad.” You know, since the Biden administration refers to Palestinian terrorists and the Israeli military as “both sides” when urging restraint and de-escalation.

This brings to mind comedian Jay Leno’s 2014 barb about then-President Barack Obama knowing “just how unbreakable the U.S.-Israel bond is, since he’s been trying to break it for years.”

It was Trump who turned this around, to the dismay of the very progressive Jewish organizations that have been slandering him for his Truth Social post. They and numerous media outlets have been going so far as to compare his statements to those of rapper/designer Kanye West (a.k.a. Ye), whose recent rants have been filled with unapologetic Jew-hatred with violent rhetoric.

Not only does it serve to highlight the subpoenaing of Trump to testify before the House select committee investigating the January 6 Capitol riots; it also constitutes a Hail Mary pass on the part of all those praying to stave off a likely defeat for Democrats in the upcoming midterms. Prominent among the worriers are Jews.

Though Trump is not alone in bemoaning their counter-intuitive ballot-box behavior, he makes the mistake of taking the age-old phenomenon personally. As the late sociologist Milton Himmelfarb famously pointed out in Commentary magazine in 1973, “Jews earn like Episcopalians and vote like Puerto Ricans.”

Fortunately, there are exceptions to that rule. The Zionist Organization of America (ZOA), for example, announced on Friday that it will be awarding Trump its Theodor Herzl Medallion. The honor will be bestowed on the “best friend Israel ever had in the White House” during the organization’s gala on Nov. 13 in New York City.

Kudos to the ZOA for giving gratitude where it’s due.

We would love to hear from you! Please fill out this form and we will get in touch with you shortly.
Trending Z
News October 20, 2022
ZOA Deplores that Pres. Trump Dined with Jew-Haters Kanye West & Nick Fuentes, and Demands he Condemn Them
Uncategorized October 20, 2022
ZOA Honors Trump With Rarely Given Herzl Award for His Great Pro-Israel Work – Joins Ranks of Balfour, Truman, Begin, Meir, Ben-Gurion
News October 20, 2022
ZOA Responds to Questions About Pres. Trump, Kanye West, Fuentes, etc. Issue
Uncategorized October 20, 2022
Zionist Organization of America Honors Donald Trump for Support for Israel, Jewish Community
Center for Law & Justice
We work to educate the American public and Congress about legal issues in order to advance the interests of Israel and the Jewish people.
We assist American victims of terrorism in vindicating their rights under the law, and seek to hold terrorists and sponsors of terrorism accountable for their actions.
We fight anti-Semitism and anti-Israel bias in the media and on college campuses.
We strive to enforce existing law and also to create new law in order to safeguard the rights of the Jewish people in the United States and Israel.
Our Mission
ZOA STATEMENT
The ZOA speaks out for Israel – in reports, newsletters, and other publications. In speeches in synagogues, churches, and community events, in high schools and colleges from coast to coast. In e-mail action alerts. In op-eds and letters to the editor. In radio and television appearances by ZOA leaders. Always on the front lines of pro-Israel activism, ZOA has made its mark.
Related Articles
OP-ED BY: ZOA Staff ZOA Statement on Proposed Funding Cuts to CUNY